Without any evidence, Trump claims he lost California because 'illegals' vote 'many times' 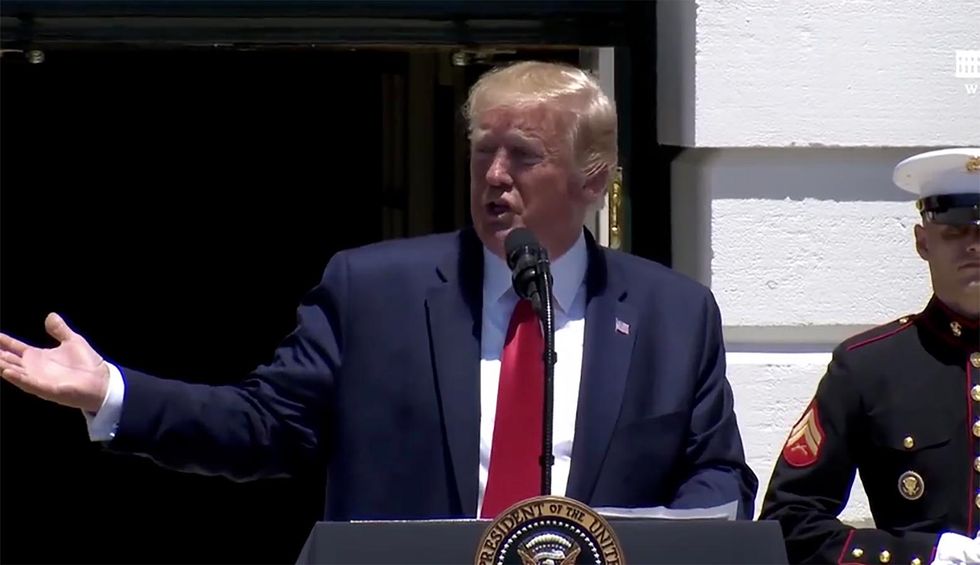 I’d love to believe in a world where I’m not a champion high jumper because Canadian spies sneak into my bedroom at night and surreptitiously force-feed me McDonald’s hot apple pies through a beer bong. But, sadly, I live in consensus reality, so no.

But Donald Trump doesn’t have any such restraints.

Some might think he lost California by 4.3 million votes in 2016 because of, well, math. But he has his own theory, which he propounded in front of a group of — WTF?! teenagers? — today at the Turning Point USA’s Teen Student Action Summit:

“And when they’re saying all of this stuff, and then those illegals get out and vote, because they vote anyway. Don’t kid yourself. Those numbers in California and numerous other states, they’re rigged. They’ve got people voting that shouldn’t be voting. They vote many times, not just twice, not just three times. It’s like a circle. They come back, they put a new hat on. They come back, they put a new shirt on. And in many cases, they don’t even do that. You know what’s going on. It’s a rigged deal.”

You can find the video in the second tweet, after the bit about — WTF?! he’s still talking about her? — Hillary.

This nonsense about people putting on a hat to vote again is something Trump has said before. It seems to be predicated on the idea that the integrity of the voting process rests on the ability of pollworkers to remember if they’ve already seen a prospective voter cast a ballot.

The third untrue thing Trump said to the Turning Point teens was that the process was rigged. He was subtle in a Trumpy way, suggesting with an audible wink that fraudulent voting is allowed by California’s Democratic leadership. That’s why the voters didn’t have to change shirts: The state’s leadership is in on it. So let’s think about this, too. The idea is that poll workers are given instructions to let people come in and vote over and over? Instead of just, say, faking the results? It’s like running a bank and instead of wiring money to a surreptitious account you ask friends to come in and rob the place every two weeks.

Also, again, he lost California by 4.3 million votes. That’s a helluva lot of voter fraud that’s gone completely undetected. It’s also around the same number of total votes Trump/Pence received in California. So if the margin of error is 4.3 million votes, I can just as easily assume that Trump got zero.

That makes me feel a lot better, actually.

And, of course, any idiot knows that California is a safe blue state, so cheating there would be idiotic. If Hillary’s campaign were going to cheat, it would have been wise to do it in Wisconsin, Michigan, or Pennsylvania. But instead the Democratic machine apparently dedicated its best and most nefarious minds to running up the score in California. Just because!

Gee, it must have been tough to get all those people who are in constant mortal fear of being discovered and deported to show up at the polls with fake IDs and go through the line numerous times with different hats and shirts on. But the Democrats somehow did it! And yet, according to Republicans, we’re all a bunch of incompetents.

One thing I do know is our pr*sident is insane in the membrane. Don’t kid yourself.