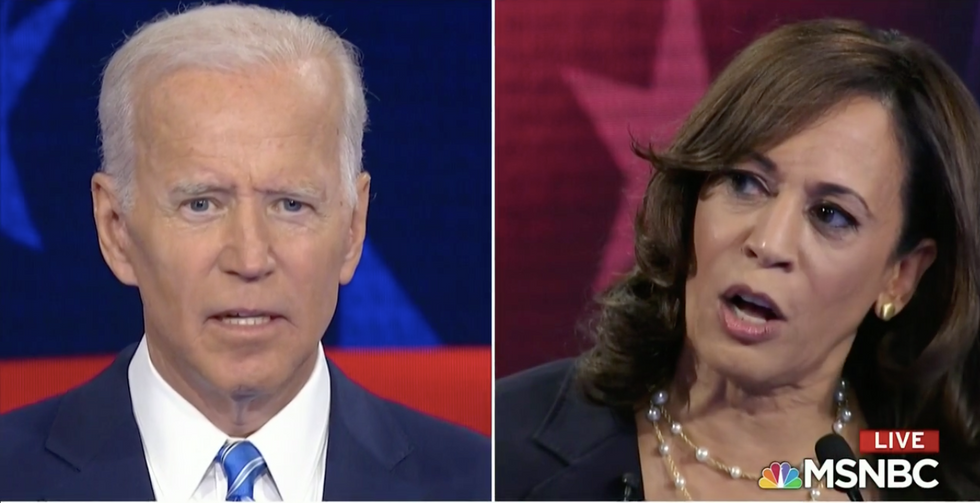 One of the charming side effects of having a Democratic frontrunner who has been in politics longer than half the electorate has been alive is the chance it offers to relitigate controversies from a time when Led Zeppelin was still releasing records. In this case, the issue is 1970s-era efforts to racially integrate public schools, which were assigned the euphemism "busing," and whether or not Joe Biden was wrong to oppose federal efforts to force school integration on communities where white-controlled local and state governments resisted it.

The proximate cause of this reopened debate is Sen. Kamala Harris tearing into the former vice president during Thursday night's Democratic debate over his tendency to speak fondly of his previous relationships with white supremacists in the Senate. To prevent Biden from hiding behind the norms of Senate collegiality to defend his choice, she noted that he "also worked with them to oppose busing" and recounted her own history as a participant in a Berkeley, California, busing program that began in 1968, one year before she entered school.

What makes Harris' line of criticism so fascinating is that Biden and other opponents of aggressive desegregation won the argument back then. In modern America, schools have largely become segregated again. But when Harris was asked by a reporter on Sunday if she supported the return of busing to desegregate schools, she said she did. "We need to put every effort, including busing, into play to desegregate the schools," she said, adding that busing was "one small piece of the very big piece."

That view may be unpopular with the public at large, but Harris is right. Right now, in America, desegregation is more a legal myth than a lived reality for students. Due to decades of redlining and white flight, communities tend to be highly segregated by race, and subsequently the local public schools are as well.

Berkeley's school busing program, like most in the nation, was an attempt at a workaround. Black families in the city had been sequestered to the southern and western portions of the city because they had literally been barred from buying homes elsewhere. So the only way to create meaningful integration was to send kids to schools that weren't in their direct neighborhoods.

As historian Matthew Delmont details at The Atlantic, "parents used euphemisms such as busing and neighborhood schools to maintain segregated schools without explicitly saying they did not want their children to go to school with black or Latinx students." It became common  — and still is — for people to defend anti-busing attitudes by hiding behind concerns about local control and commute times. But history shows again and again that even if those concerns are accounted for, white parents will fight every effort to integrate public schools.

That's a real shame because the evidence shows that school integration is, on the whole, a good thing, and not just for students of color who suffer in a system where they're segregated into schools that tend to be neglected and underfunded. It can also benefit white students, who, despite parental assumptions to the contrary, are not well-served growing up in a bubble with little exposure to people who look different or are from different cultural backgrounds.

This helpful fact sheet from The Century Foundation (TCF) lays out the research on school integration, which shows that racially integrated schools have higher test scores and lower dropout rates. Most of that is due to kids from lower-income backgrounds getting access to the resources at better-funded schools that tend to be reserved for whiter, more middle-class communities. This is also why so many white parents — even those who fancy themselves liberal — continue to resist, wishing instead to hoard those benefits for their own children.

That attitude is arguably self-destructive. As TCF points out, integrated schools "offer students important social-emotional benefits by exposing them to peers of different backgrounds." Even if white parents lecture their children on the evils of racism, they are undercut that message in practical terms if they enroll their kids in predominantly white schools. As the research shows, actions speak louder than words — and the best way to teach white kids not to be racist is to expose them to peers and authority figures who aren't white from a young age.

To be certain, integration is not a cure-all for racism. People who went through school integration programs in the '70s tell stories of racial slurs, lunchtime segregation and mistreatment at the hands of teachers. Certainly there are good ways and bad ways to do this. Simply throwing kids together without any guidance or programs to help ameliorate problems is a bad way to go about integration, and schools need to do this with thought and care to ease the transition.

But, as Harris said, school integration is just a small piece of the overall picture of what's needed. It is ludicrous to insist our country has somehow grown past racism when the youngest Americans grow up with almost no exposure to people who are different from them.

Lately, some historians and other academics have pushed back against the common wisdom that aggressive school integration didn't work, arguing that just because paranoid white people thought that doesn't make it true.

Educational sociologist Amy Stuart Wells actually bothered to interview the students who went to such schools in the '70s and found that, while racial inequalities continued to shape their lives after graduation, the experience helped the students develop more broad-minded attitudes as adults. Economist Rucker Johnson did similar research, showing that students of all races who went to integrated schools in the past did better over the long run than those who did not.

Biden's campaign response to this controversy has been to highlight his opposition to federal enforcement of integration efforts and to insist, as he did during the debate, that he has no interest in preventing local school districts from choosing integration programs for themselves.

But as civil rights organizer Jesse Jackson noted in a recent interview, this is the same "states' rights" argument that was used to justify everything from slavery to Jim Crow laws. Making anti-racist policies voluntary "assumes that those who are oppressive have some will to move based on moral values, and that does not happen."

It's brave of Harris to argue that integration programs have a role to play in 21st-century America. By doing so, she risks alienating many white liberal voters who fancy themselves anti-racist but who, when the rubber hits the road, may balk at living in communities or sending their kids to schools that have more than token diversity.

But Harris is right to speak out. Laws that ban formal discrimination simply aren't enough to tackle the problem of systematic racism that results in people of color falling behind, generation after generation, while white people have the lion's share of wealth and social status. Showing a white kid a video of Martin Luther King Jr. and a lecture on the evils of racism doesn't cut it if that child does not see black people in his life as peers or authority figures. Aggressive school integration won't be enough to fix all the country's racial problems, but it would be a good start.