Who can be a 'real' American? 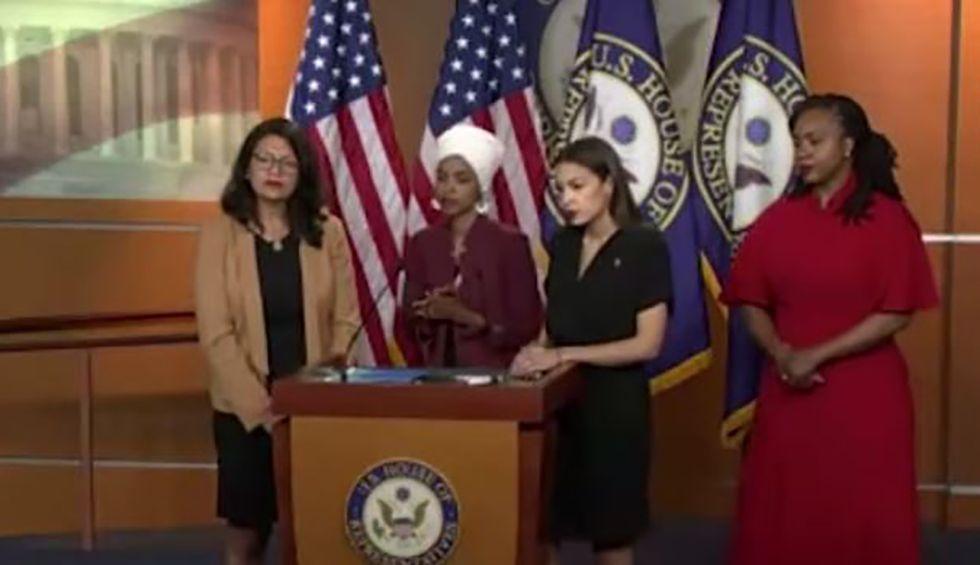 “Why don’t they go back and help fix the totally broken and crime-infested places from which they came” the president of the United States recently tweeted. Trump was referring to four Congress women of color, three of whom were born in the United States. The other is a naturalized American citizen. Trump continued his criticism of “the Squad,” in particular Congresswoman Ilhan Omar, at a campaign rally and the crowd responded by chanting “send her back.” As David Leonhardt of the New York Times wrote, “It was an ugly, lawless, racist sentiment, and President Trump loved it”. He later denied that he supported the crowd’s chant.  It’s hard to imagine Trump telling a white man, even someone like Senator Bernie Sanders who he disagrees with, to go back to where he came from. Correctly charged as a racist statement, the tweet also reflects an age-old question in our history: who can be an American?

There have always been two views of what defines American identity. One is tied to a traditional racial or ethnic view, ethno-nationalism for short, the other is that America is an idea. Gunnar Myrdal of Sweden dubbed the second one the American Creed: Americans were bound together by “the ideals of the essential dignity and equality of all human beings, of inalienable rights to freedom, justice and opportunity.” Myrdal was referring to Jefferson’s natural rights section of the Declaration of Independence when he made this observation.

Today, the United States is religiously, culturally, and ethnically diverse. Yet we see ourselves as Americans in large part due to this creedal notion of America. In 2018, two scholars at Grinnell College “polled Americans on what they most associate with being a real American.” They found that a “vast majority of respondents identified a set of values as more essential than any particular identity.” As the historian Mark Byrnes wrote for HNN back in 2016, “The United States is fundamentally an idea, one whose basic tenets were argued in the Declaration of Independence and given practical application in the Constitution.” These ideas revolve around liberty, equality, self-government, and equal justice for all, and have universal appeal. “Since America was an idea, one could become an American by learning and devoting oneself to” those universal ideas, Byrnes observes.

Despite the strong appeal of the American Creed, 25 percent of those polled by Grinnell College held nativist views similar to those espoused by Donald Trump during his 2016 election campaign for president, and as further reflected in his comments after Charlottesville and in his recent tweet. The view that ethnicity and race made the United States one people predominated in the early American Republic. John Jay, in Federalist No. 2, made the argument that the United States was one nation at the time of the debate over ratification of the Constitution by appealing to ethno-nationalism. He wrote that we are “one united people—a people descended from the same ancestors, speaking the same language, professing the same religion, attached to the same principles of government, very similar in their manners and customs and who, by their joint counsels, arms, and efforts…established their general liberty and independence.” Jay’s thesis largely reflected the traditional view of nationhood. A majority of Americans were of English descent in 1788 and they viewed America as a nation for white people, with Caucasians, and specifically Anglo-Saxons,as the superior race. Some scholars even defend these ideas: the late Samuel P. Huntington, who was a Harvard political scientist, has argued that this Anglo-Saxon heritage ultimately contributed to the American Creed.

While Jay’s ethno-nationalist perspective obviously cannot describe the United States today, it was inaccurate even in 1790, when we were already a diverse people. African Americans, most of them enslaved, were 20 percent of the total population in 1790. In Pennsylvania, thirty-three percent of the people were of German ancestry, and both New York and New Jersey had large numbers of German and Dutch peoples. There were also conflicts between the English and these other groups, including the Irish, the Scottish, and the Welsh, who were themselves from the British Isles.

While ethno-nationalism has deep roots in the United States, so too does Jefferson’s American Creed. Jay himself noted that the United States was “attached to the same principles of government,” a reference to the support for the establishment of a government grounded in the consent of the governed. To Thomas Paine, the country was drawn from “people from different nations, speaking different languages” who were melded together “by the simple operation of constructing governments on the principles of society and the Rights of Man” in which “every difficulty retires and all the parts are brought into cordial union.” Washington saw America as a place that was “open to receive not only the Opulent and respectable Stranger, but the oppressed and persecuted of all Nations and Religions.” Hector St. John de Crevecoeur was another adherent of the view that America was an idea. Originally from France, he emigrated to New York during the colonial period. Crevecoeur talked about the amazing “mixture of English, Scotch, Irish, French, Dutch, Germans, and Swedes” who were “a strange mixture of blood.” He referred to people who came to the United States as Americans, a place where “individuals of all nations are melted into a new race of men.”

Still, rapid increases in immigration have always threatened this notion of American identity.The founding fathers differentiated between the people who inhabited the original thirteen colonies, who were largely drawn from northern Europeans, even if today we see few differences between people of European descent. Benjamin Franklin complained about the “Palatine Boors” who swarmed “into our Settlements…herding together” and creating a “Colony of Aliens.” Thomas Jefferson doubted that he shared the same blood as the “Scotch” and worried about immigrants from the wrong parts of Europe coming to the United States,” Francis Fukuyama writes in his recent book Identity. During periods of rapid immigration, nativist movements tend to emerge.

For people of color, America has rarely been a welcoming place. Many Black Americans were brought here as slaves, and Native Americans were overrun as the insatiable desire for land led to ever greater westward expansion. Our history must always take into account “the shameful fact: historically the United States has been a racist nation,” as the historian Arthur Schlesinger framed it in his book The Disuniting of America. “The curse of racism has been the great failure of the American experiment, the glaring contradiction of American ideals.”

So much of American history can be seen as an attempt by previously excluded groups to also be granted their share of the rights for which the American Creed calls. By the 1850’s, abolitionists had been agitating for an end to slavery and the extension of rights to black people. Lincoln eventually become committed to a creedal view of America that extended the rights enshrined in the Declaration of Independence to all people, black and white, native born and immigrant. Martin Luther King Jr., in his “I Have A Dream Speech” delivered in front of the Lincoln Memorial in 1963, reminded the nation that it had fallen short of its founding ideals, that the Declaration of Independence was a “promissory note to which every American was to fall heir…yes black men as well as white men.”

In the early 21st century, in the aftermath of the election of our first African American president, many of us hoped that our great nation had grown beyond the ethno-nationalist version of America, but the election of Donald Trump proved that this is not the case.  As Americans, our challenge, in the words of Francis Fukuyama, is to avoid “the narrow, ethnically based, intolerant, aggressive, and deeply illiberal form that national identity took” in our past, and which Trump is trying to reignite. Instead, we need “to define an inclusive national identity that fits [our] society’s diverse reality.” The challenge of our times is to continue our commitment to a creedal vision of America. We need to make a reality of the opening words of our Constitution, that “We the People” means all people who share the American creed, regardless of race, ethnicity, or religion, and to constantly strive to unleash, in Lincoln’s words, “ the better angels of our nature.” We can start by denouncing Trump’s continuing appeal to racism.