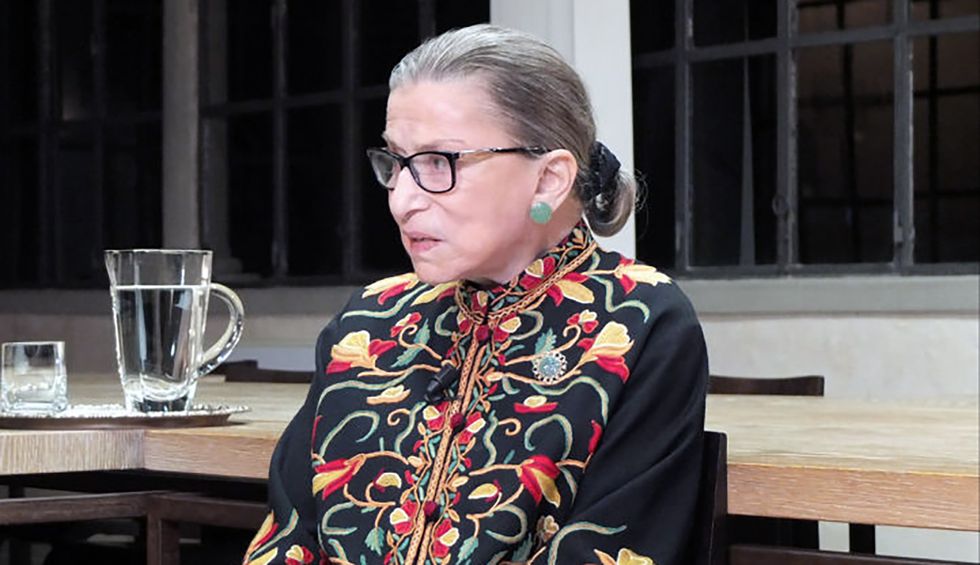 When trying to appeal to the progressive base of the Democratic party, it is frightening to take on Justice Ruth Bader Ginsburg. After RBG said that the Supreme Court should not be expanded, however, there’s an opportunity — and even an imperative — to do just that.

As reported by Politico last week, NPR’s Nina Totenberg asked Ginsburg about proposals to expand the court beyond its current membership. The justice responded: "Nine seems to be a good number. It's been that way for a long time. If anything, [court expansion] would make the court look partisan.”

The very fact that a sitting Supreme Court justice is being asked about court expansion underscores the growing understanding among voters and opinion leaders that the court has been co-opted by the Republican Party, and has broken democracy for partisan ends by allowing voter suppression, gerrymandering and unlimited dark money.

RBG is an essential voice on the court and a vote for justice for all Americans. We suspect that she would agree, however, that it is not her role to acknowledge what everyone knows, that the Supreme Court has become a partisan institution. No sitting justice can break the taboo of the dispassionate judiciary by publicly questioning colleagues’ commitment to the rule of law, let alone calling for reforms that would restore it.

Even though Ginsburg has to continue to maintain the pretense of the Supreme Court as a nonpartisan institution, the 2020 presidential candidates are under no such obligation. To the contrary, it is imperative upon them to recognize and reckon with the fact that the high court is a political institution that has been hijacked by the GOP to advance a partisan agenda on behalf of corporations and billionaires.

It is also an imperative that Democrats make the case to voters that democracy cannot be restored unless the court is reformed. Even if a Democrat wins the White House and persuades Congress to enact his or her signature legislation, the Court will strike down or sharply curtail any important statutes the new president manages to pass. It is frankly naïve to believe that the Roberts court would allow Congress to expand health care access, reduce economic inequality, mitigate climate emissions, eliminate gun violence or fix immigration.

The Supreme Court will block all of that, and if you think that Chief Justice John Roberts will ride to your rescue and rule in an even-handed way, we urge you to follow our forthcoming John Roberts-Is-Not-a-Moderate campaign. We will release extensive data showing that Roberts votes just as conservatively as his most extremist current and former colleagues — Justices Clarence Thomas, Antonin Scalia, Samuel Alito and Brett Kavanaugh — and that his reputation for centrism is wholly at odds with his record.

In fact, Roberts has leveraged the very conventions of neutrality and collegiality that prevent RBG from calling out her colleagues or from calling for judicial reform to bolster his unearned reputation as a moderate. When Roberts stated at his confirmation hearings that his job is to call "balls and strikes" and that he would respect precedent, he played to the myth of the nonpolitical Supreme Court, as when he recently asserted that there was no such thing as an Obama judge or a Trump judge.Last week, former Colorado governor John Hickenlooper became the 11th 2020 candidate to say that he is open to expanding the Supreme Court. Hickenlooper had been opposed to the idea, but came around after realizing that Justice Roberts and his conservative colleagues now pose a grave threat to Roe v. Wade, marriage equality and other core rights.Without diminishing RBG's iconic status as a national hero, it is incumbent upon the 2020 candidates to make the case to voters that our democracy is broken and that the current makeup of the Supreme Court is a big part of the reason for that. As long as the high court will not allow Congress to restore democracy, judicial reform must remain on the table.
Report typos and corrections to: feedback@alternet.org.
#story_page_ below_article