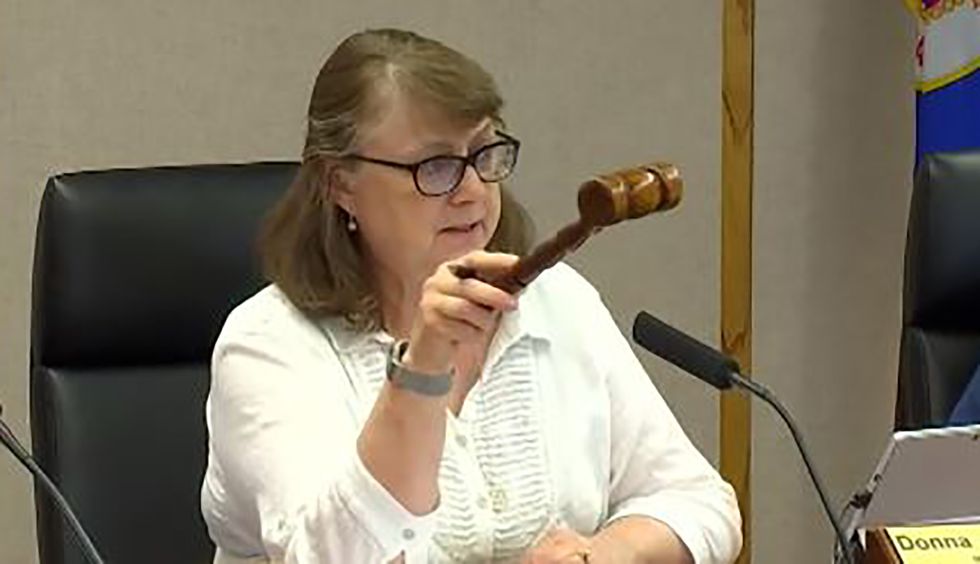 Columbia Heights, Minnesota Mayor Donna Schmitt has signed proclamations for Arbor Day, National Library Week, Polish American Heritage Month, and even for a local pastor. She recently supported the "second annual Peace Fest, put on by the Science of Spirituality," but she steadfastly is refusing to sign a gay pride proclamation, and the local LGBTQ community is speaking out.

During Monday's city council meeting Mayor Schmitt angrily chastised LGBTQ citizens, banging and waving her gavel at them and threatening to "ask some of you to leave," as video from Fox 9(below) shows.

"You don't need a piece of paper from me," Mayor Schmitt told LGBTQ residents Monday.

The Columbia Heights Pride Organization and other groups tried for weeks to get the mayor to recognize this upcoming Saturday's LGBTQ Awareness Day and Pride festival. It wasn't until last week that they finally got to talk with her, and her answer was no.

The mayor claims the group did not follow proper guidelines, and as a result she was unable to sign a proclamation for them.

But Mayor Schmitt admitted to a local news station that those guidelines were developed the same week that the LGBTQ groups began asking for the proclamation.

"It is not about a group, it's about, let's follow the guidelines," Schmitt told ABC 5. "They can go out and celebrate, they are more than welcome to rent our parks and have a family friendly event as they have requested."

And after Monday's city council meeting Mayor Schmitt went after the LGBTQ citizens.

"I just hope they realize, they don't represent everyone in the city either," she said.