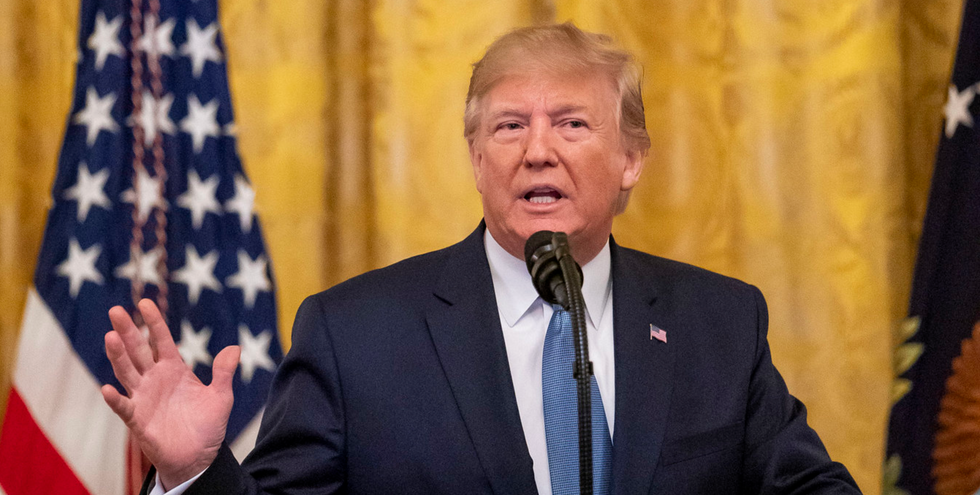 Nobody expects Donald Trump to speak the truth about himself or his opponents anymore. To support him requires a suspension of disbelief that is impressive in a misbegotten way.

So when the president of the United States tells four duly elected members of Congress to go back to where they came from, an old trope of bigotry that everybody understands, the politicians who support him pretend that he was saying something else. Even his rank-and-file backers know how to play dumb -- like the gentleman who told NPR that Trump was merely telling Reps. Alexandria Ocasio-Cortez, Ilhan Omar, Rashida Tlaib and Ayanna Pressley to "go back to their home states." Sorry, but nobody is really that stupid, although Trump and his minions treat us all as if we are.

Behind Trump's rhetorical tactics lies what psychologists call projection: Each accusation he lodges against adversaries is emblematic of his own character. Defaming the four women of color, he said, "They hate our country. They hate it, I think, with a passion." He said they express "a love for enemies like Al Qaeda." And he was merely inviting them to leave the United States "if they want to leave," which they must because "they're doing nothing but criticizing us all the time."

As usual, he was lying. His absurd claim about Al Qaeda was a reference to Omar, who is Muslim and, therefore, slandered in this way regularly. She has never praised any terror group and instead has denounced terrorism many times. Indeed, she has publicly criticized the Saudi funding of Al Qaeda, which is more than Trump has ever done.

No, it's Trump who constantly sucks up to this country's enemies. He grovels to Russian President Vladimir Putin, whose intelligence services are devoted to assaulting us and our allies, most notoriously through our electoral systems. He truckles to the Saudi monarchy, which has encouraged jihad for decades and most recently financed the Islamic State. He is "in love" with Kim Jong Un, the North Korean tyrant who murdered an innocent American and openly threatens us with nuclear weapons.

As for the four congresswomen's supposed hatred of America and desire to leave, three of them were born here and know no other home. The fourth came here as a child refugee and built a new life of civic activism in her new home. They've sworn an oath to defend the U.S. and the Constitution. They've spoken movingly, as Ocasio-Cortez did, of the inspiration they find in American symbols such as the Lincoln Memorial. And like every patriot, they've sought to create a more perfect union -- which cannot be done without criticism that sometimes sounds unsparing.

So far, none of those women has uttered a sentence that paints America as darkly as the portraits wrought repeatedly by one Donald Trump: in his furious tweets during the Obama years, in his grim campaign book, "Crippled America," in his frothing GOP convention acceptance speech and in his bizarre "American carnage" inaugural speech on Jan. 20, 2017. Over and over again, Trump told us that we live in a crime-ridden dystopia, an economic ruin, a declining power that had earned the world's derision.

Did Trump "hate America" when he said those terrible things? He would bristle at the very notion. He would say that he was just attacking Barack Obama, not America -- which he has proved he loves with his creepy hugging of the flag. And of course, he had every right to knock Obama, to complain about the former president's domestic and foreign policies, even to lie about his citizenship. Bear in mind, however, that Trump would deny the same right to others now if he could. That is why he talks about expanding libel laws and whines that "fake news" shouldn't be considered free speech.

What Trump wants Americans to believe is that criticizing him and his crimes is the moral equivalent of hating America. This is the personal ideology of every would-be tyrant, always amplified by vilifying citizens of a different race, religion or immigration status. We have seen it in history, and we are seeing it now.

Who hates America? Look at the man who turns Americans against one another every day to distract us from his outrages against law, decency and the Constitution. Then ask yourself that question.