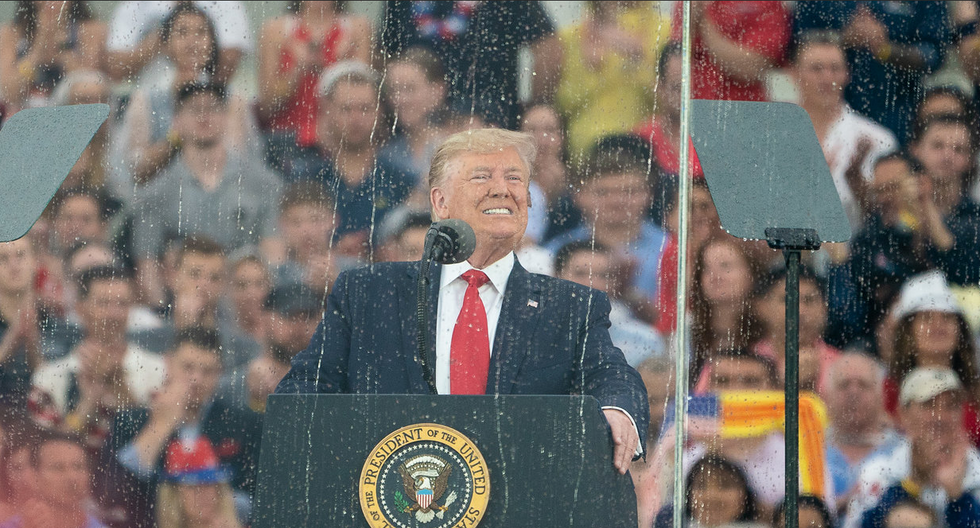 Donald Trump’s Fourth of July speech was sophomoric. The fly-overs were anemic. The pairs of Bradley fighting vehicles and M1-A2 tanks were practically invisible. Everyone was soaked to the skin. They even played the hoary redneck anthem, “I’m Proud to Be an American.”

But the crowd loved it. Trump told them the Declaration of Independence was written on “parchment.” They clapped. He told them Lewis and Clark went on a “perilous expedition.” They cheered. He told them that “devotion to our founding ideals led American patriots to abolish the evils of slavery, secure civil rights and expand the blessings of liberty to all Americans.” They cheered some more. He reassured them that this country is “the most exceptional nation in the history of the world, and our nation is stronger today than it ever was before and it is its strongest now.” They cheered and waved flags and chanted “USA! USA! USA!” Trump stood there nodding his head, and they cheered and chanted some more.

Trump fed them this kind of red-meat faux patriotism for 47 minutes. He announced his anemic flyovers by each of the military branches: a cargo plane and two helicopters for the Coast Guard; two fighters and a B-2 bomber for the Air Force; two F-18’s and two F-35’s for the Navy; a helicopter and two V-22 Ospreys for the Marines; two attack helicopters for the Army. As a military band played the anthem for each of the military services and their aircraft flew by overhead, Trump stepped back from the microphone and attempted to stand at attention, but couldn’t keep his head from nodding along to the tune of the music.

The crowd loved every minute of it. They cheered. They clapped. They chanted “USA” over and over. They waved flags and held their children aloft, even though few of them could see the president behind his red, white and blue bunting, obscured from view by a gigantic covered stage for the television cameras that stood between him and most of the crowd.

The VIPs could see just fine  — gathered close to the stage were Trump’s big Republican donors, his campaign workers, Republican congressmen and senators, lobbyists and think tank thinkers, every single Republican they could manage to dislodge from their backyard barbecues and country club holiday golf games. Chain link fences walled them off from the red-hat-wearing masses, who were held at bay by military police and parks department rangers and Secret Service officers.

The crowd adored the man who delivered his fourth-grade-level history lesson in robotic, singsong cadences that had nothing to do with the words he spoke. It was another Trump teleprompter speech that sounded like he was reading it for the first time. Following the speech, pundits had great fun pointing out his flubs – the Revolutionary War army “manned the air, it rammed the ramparts, it took over the airports, it did everything it had to do, and at Fort McHenry, under the rocket's red glare it had nothing but victory." Trump would later claim the rain had smeared his teleprompter screen.

None of it mattered. His crowd went wild. They loved every smarmy, self-satisfied syllable. They cheered his attempts to stand at attention. They loved it that the libs had gotten all hot and bothered about his militarization of the Fourth. They didn’t care in the least that it was the cheapest, lamest, most pathetic display of military might ever put on. It was Trump’s. He was all that mattered.

After the speech was over, my Facebook feed filled up with posts from people who couldn’t stand to watch it, so they didn’t. Same thing on Twitter. If they were monitoring Democrats’ social media feeds at Trump campaign headquarters, they must have been cheering. They did what they set out to do. They put on a big patriotic extravaganza for the base — even though it was faux-patriotism, and hardly an extravaganza — and watched the libs stew in their juices.

The Democratic candidates for president should get tapes of Trump’s “Salute to America” and make watching it mandatory within their campaign operations. Trump’s speech sounded like it had been written by the “creatives” at Hallmark, and that was the point. Americans love fried food and butter and NASCAR and Little League baseball and county fairs. Hell, it’s the season for all the crap Americans love. Trump knows this. He put on a Fourth of July that celebrated the America people think they live in, not the one that’s actually outside their front doors.

This stuff is nothing new. Nixon was a past master at smarmy fake patriotism. I remember covering the 1972 Republican convention in Miami and standing on the floor surrounded by cartoon versions of the kinds of people I hated — blue-haired Republican women wearing weird hats sprouting bouquets of little American flags, jowly country club golfers with bulbous noses and martini-rimmed red eyes screaming, “Four more years” — the place was like a middle American version of that bar in “Star Wars.” The only person who could capture the horror of it all was Ralph Steadman.

Democrats would do well to start paying attention to Trump’s rallies, starting with the one that happened on the Mall in Washington on Thursday. He uses them to road-test his lies. He learned all his best-selling lines in front of crowds just like the one he faced on the Fourth.

We are not the country we like to think we are. Trump won in 2016. “Make America Great Again” carried the day for him. His “basket of deplorables” turned out for him. They can do it again.