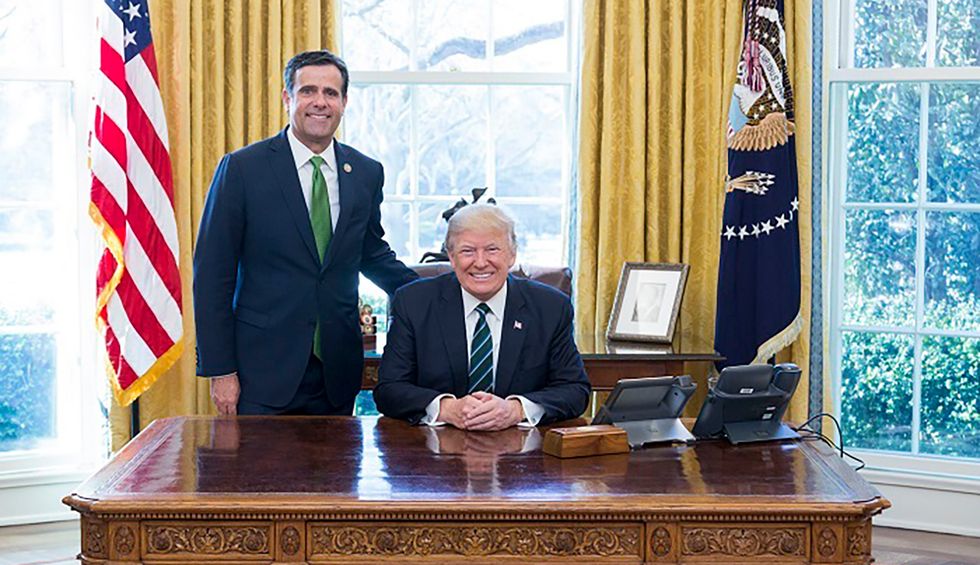 Imagine the indictment of a former national security official in the Obama administration for violation of the Espionage Act. Imagine James Clapper or Sally Yates facing the same charges as Julian Assange or Chelsea Manning.

That dream of right-wing media (and some left-wing critics) came one step closer to reality Sunday, when President Trump announced the appointment of Rep. John Ratcliffe of Texas as the new director of national intelligence. On Sunday, Ratcliffe told Fox News host Maria Bartiromo, his number one idea for “investigation of the investigators”: prosecute a source of the Washington Post.

Ratcliffe expressed the hope that the Justice Department will investigate the leak to Washington Post columnist David Ignatius in January 2017 that led to the resignation of Trump’s first national security adviser, Michael Flynn. Ignatius’ reporting raised the possibility that Flynn had lied about a pre-inauguration conversation with Russian ambassador Sergey Kislyak. Flynn was forced to resign after only 24 days on the job.

Flynn’s “phone call with the Russian ambassador was a highly classified NSA intercept,” Ratcliffe said. “Someone in the Obama administration leaked that call to the Washington Post. That’s a felony.”

Both legally and factually, Ratcliffe’s statement is open to question, which is no surprise. Ratcliffe, a former federal prosecutor who has served in Congress since 2015, is short on intelligence experience and long on dubious claims. According to ABC News, he took credit for a terrorism financing case that other attorneys say he had nothing do with. He claimed that leaked FBI texts revealed the existence of an anti-Trump “secret society” in the FBI, a story that was picked up by Sean Hannity and Fox News. In fact, the Daily Beast notes the reference to “secret society” was a passing joke, and Trump’s defenders have dropped the “secret society” meme. Whether Ratcliffe’s nomination will be approved by the Senate Intelligence Committee is an open question.

Ratcliffe’s idea for prosecuting Ignatius’ source is the fourth iteration of Trump’s campaign to “investigate the investigators,” which the president hopes will turn the tables on his legal tormenters. First, John Huber, U.S. Attorney in Utah, was assigned by Attorney General Jeff Sessions to investigate the opening of the investigation of Carter Page, the Trump hanger-on who was never charged with a crime. Second, the Justice Department’s Inspector General, Michael Horowitz, took over Huber’s probe and is expected to report this fall. Third, Attorney General Bill Bar assigned another U.S. Attorney, John Durham, to delve into the origins of the Trump-Russia investigation; Durham’s probe is ongoing.

In addition, Ratcliffe’s claim that Ignatius’ column was based on an “NSA intercept” is unconfirmed. Ignatius has never said that. Indeed, it is not clear that the U.S. government has acknowledged that NSA intercepted Kislyak’s conversations, meaning it is possible that Ratcliffe himself may have broken the law against unauthorized disclosure.

Ratcliffe’s hypothetical case is based on two sentences from Ignatius’ column of January 12, 2017, “Why did Obama dawdle on Russia’s hacking?”:

“According to a senior U.S. government official, Flynn phoned Russian Ambassador Sergey Kislyak several times on Dec. 29, the day the Obama administration announced the expulsion of 35 Russian officials as well as other measures in retaliation for the hacking. What did Flynn say, and did it undercut the U.S. sanctions?”

Those were the killer questions. At the time, Ignatius wrote, Flynn and Kislyak had already acknowledged that they had talked. Both said publicly—and falsely—that they did not discuss U.S. sanctions on Russia. If Ignatius knew the substance of their conversation, he did not say it in the column. But because Flynn had indeed talked about sanctions with the ambassador and lied to colleagues about it, his days were numbered. When FBI agents interviewed Flynn on January 24, 2017, he lied again under oath.

By the end of the month, Sally Yates, a soon-to-depart Obama Justice Department official, informed the White House (in the words of another Post article) that she believed Flynn “had misled senior administration officials about the nature of his communications with the Russian ambassador to the United States, and warned that the national security adviser was potentially vulnerable to Russian blackmail.”

The message, according to the Post, “was prompted by concerns that ­Flynn, when asked about his calls and texts with the ­Russian diplomat, had told Vice President-elect Mike Pence and others that he had not discussed the Obama administration sanctions on Russia for its interference in the 2016 election, the officials said.”

So, around the time Ignatius wrote his column, Yates and other senior officials had definitive knowledge of “the nature” of the Flynn-Kislyak “communications,” and their information did not come from the testimony of either participant.

Where did it come from? An NSA intercept is one plausible source. It has long been an open secret that NSA routinely eavesdrops on the conversations of foreign ambassadors in Washington.

From a legal point of view, the key question is whether Ignatius’ source was sharing classified information when he or she said, “Flynn phoned … Kislyak several times on Dec. 29.” If so, Ratcliffe might have a case.

“The Justice Department does have a lot of legal precedent for saying that, if the information was classified, the person in the government who shared it violated the Espionage Act,” says Kate Martin, civil liberties lawyer for the Center for American Progress. “There are also strong First Amendment arguments against bringing charges on that basis.”

Assange and Manning were charged with violating the Espionage Act, a World War I-era law that forbids “unauthorized persons” from taking “national defense information” and either “retaining” it or delivering it to “persons not entitled to receive it.”

“It’s no secret that the rules are different for David Petraeus than for Chelsea Manning,” says Ben Wizner, a lawyer for the ACLU. “The government tolerates, even encourages leaks of classified information from senior officials, while whistleblowers are punished.”

The double standard is engrained in bipartisan Washington culture. In the runup to the 2003 invasion of Iraq, Bush administration officials selectively leaked information about Saddam Hussein’s WMD program without fear of prosecution. In 2015, the Obama White House leaked highly classified details about the raid to kill Osama bin Laden and faced no consequences.

By prosecuting the Post’s source, the Trump Justice Department could claim it was abolishing the double standard. As director of national intelligence, Ratcliffe would be in a position to help. Trump has empowered Barr to declassify documents from the Horowitz and Durham inquiries as he sees fit. Ratcliffe has little intelligence experience, but he does have a track record of distilling facts into misleading, Fox-friendly sound bites. “Ratcliffe would be a natural enabler in a pursuit to cherry-pick material—or, more to the point, to find material worth cherry-picking,” notes Slate’s Fred Kaplan.

If the deeply concerned intelligence officials don’t manage to kill his nomination and if the Senate approves Ratcliffe to run the nation’s 17 intelligence services, then the source of Ignatius’ story has reason to worry. A senior U.S. official might get treated like Julian Assange or Chelsea Manning. Some would see a witch hunt. Others would call it rough justice. That would be a victory for Trump, which is one reason why the Ratcliffe nomination will be resisted by the intelligence community.