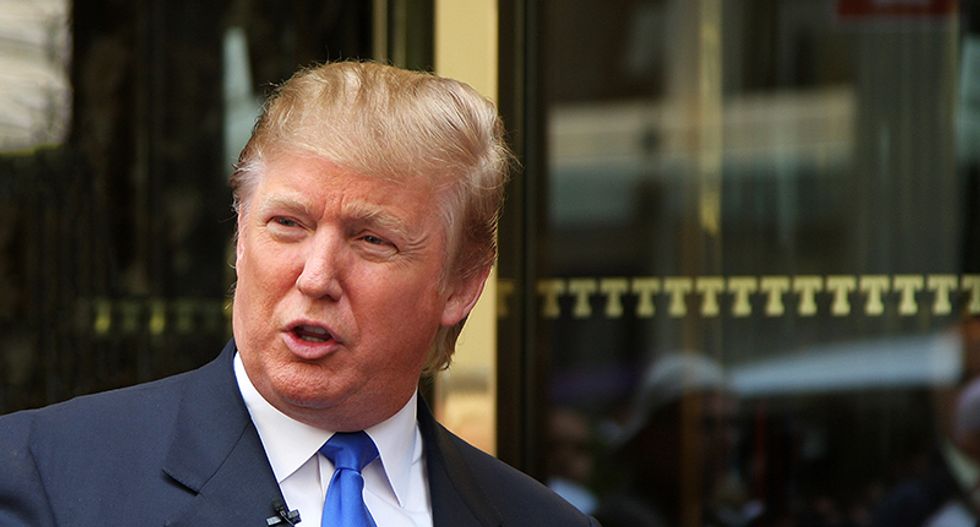 Just as he wants it.

Trump is a puppet master, his tweets, rants, and outright insanity are the strings and Democrats and the mainstream media are his puppets, as day-after day, the headlines and political debate are dominated by his latest theater of the absurd.  What gets left out is a substantive discussion about serious issues that this country desperately needs to have.

Democrats could and should be setting the agenda rather than reacting to Trumps’. But that would require them to abandon their centrist fantasy, and embrace programs that are popular with the majority of Americans.  Or to be more accurate, it would require them to take on the corporations, rich folks and Wall Street types that they rely on for campaign contributions, by backing popular ideas like a wealth tax, the Green New Deal, and Medicare for All.

But they won’t take on their patrons, so instead, they’re running on how bad Trump is, and relying on capturing the “center” -- the same strategy that over the decades has turned them into a minority party.

Instead of spending their time and energy on telling us how bad Trump is they could be setting a winning agenda.

Here are the problems voters care most about, with the percent listing it as important:

Other high-ranking concerns include the climate crisis and environmental protection, a more rational and humane immigration policy, protection of social security and Medicare, protecting the integrity of elections, especially the corrosive role of money in politics, and to a lesser extent terrorism.

It’s worth noting that Republicans are manifestly on the wrong side of every single one of these issues, with the exception of terrorism – which as noted, is a relatively lower ranking issue for voters.

Let’s take a look at the Republicans’ signature economic initiatives -- tax cuts for the rich, and tariffs.

The results are in on the tax cut – the ultra-rich (including foreign investors) and corporations walked away with virtually all the benefits.  There was no explosion of investment by corporations and wages continued the anemic increases that were occurring before the tax cut.

Trump’s tariffs cost Americans at least $22 billion through April, and the price will continue to go up – but the worst part is that many markets once dominated by American exports are gone for good.

Health coverage? Republicans have been punting on this issue for a decade now, and a significant majority of Americans trust Democrats more on this issue than they do Republicans.  Medicare for All is popular with a majority of Americans, as is shoring up Obamacare. Progressive Democrats are making one mistake on health care.  Vowing to outlaw private insurance is neither necessary nor wise -- or legal, for that matter.  The increased efficiency of a public system would make them obsolete for all but the wealthiest people in any case, just as it is in Great Britain.

About the only major issue of concern in which Republicans hold their own is terrorism, and this is really a second-tier issue compared to the other issues voters raise.

And it’s important to realize that these polling results reflect the current state of concerns, despite the fact that Democrats have no coherent brand and no real message on any of them.  Nor have Democrats attempted to shape the polls in any way. Their entire strategic approach seems to rest on taking the polls as given, trying to spin their way on the latest popular sentiment on issues without compromising their campaign contributions, and telling us how bad Trump is.

Which brings us to “all Trump, all the time.”  Trump is good at only one thing – dominating the news cycle.  The fact that Democrats are complicit in it, by virtue of having no coherent agenda of their own, and that the mainstream media enables it, makes it easy for him.

If you want an example of how profoundly the media has abandoned issues and facts, just look at the coverage of Mueller’s testimony.  The vast majority of it was about his “performance,” as if he were competing for a daytime TV soap or something.  The Democrats hoped that the testimony would highlight the many manifestly impeachable offenses in the report, but  for the press, Mueller’s lack of entertainment value scuttled that.  Never mind that he clearly said the report did not exonerate Trump; never mind that he warned against an ongoing attack on our elections.  To hear the press tell it he simply wasn’t perky enough.

But this brings us back to the Democrat’s dangerous “Trump is terrible” campaign.  Look, most of us know how bad he is already; some 40 to 45 percent don’t care, they’ll vote for him anyway, either because they’re deluded, dumb, or so angry they just want to blow up the whole system.

The tragedy is, the progressive wing of the Democratic Party has programs and plans to address the issues voters care most about, and those programs are popular with the voters – including Independents and even many Republicans -- but the Party elites won’t run on them.

If you doubt that corporate media is doing its best to keep progressives from getting their message out, let’s go right to two of the outlets most often identified with the extreme “liberal” media.  Exhibit A has to be PBS’ Washington Week where host Robert Costa and a list of luminaries from the MSM cast Mueller’s testimony almost entirely on his performance – one almost expected them to hold up cards ranging from 1 to 10.  Andrea Mitchell was the sole exception, noting that the testimony, while not flashy, was damning from a fact-based perspective.

Or you can go straight to the belly of the beast – MSNBC, that smoking, smoldering cauldron of liberality – and see how they’ve been systematically undercutting Sanders, beginning back in 2016.

So the angry and disaffected minority will go to the election with a candidate who represents them.  Meanwhile, the voters who are progressive on an issue-by-issue basis – a large majority of the electorate – are being blocked by the corporate wing of the Democratic Party, and the corporate media.

It’s tempting to say the hell with the Democrats and vote for a third party – something I’ve done with some regularity over the years – but this year, with this candidate, we don’t have the luxury.  Trump is, quite literally, an existential threat, not only to our democracy, but with his climate denial, to the entire ecosystem.

But unless the Democrats decide to develop a coherent campaign based on values and addressing the issues people care about with programs they support, Trump will continue to dominate the news cycle and that gives him a good shot at winning.