True patriots are rebels, not bootlickers 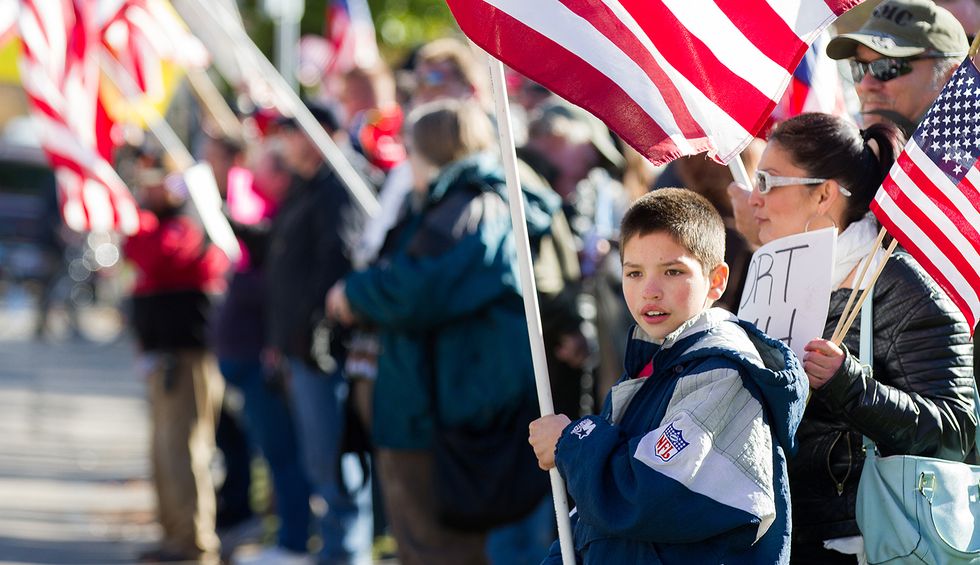 Samuel Johnson famously wrote in 1775 that “Patriotism is the last refuge of the scoundrel.” In The Devil’s Dictionary, Ambrose Bierce made the appropriate correction: “With all due respect to an enlightened but inferior lexicographer I beg to submit that it is the first.”

The eight years of the George W. Bush administration and the two-and-a-half years of the Trump regime prove Bierce’s thesis once and for all. The remorseless scoundrels then and now in charge of the executive branch weren’t the first American leaders to taint patriotism with racketeering, warmongering, privatizing, racism, fraud, fecklessness, betrayal, incompetence, injustice, absolutism, corporatism, cronyism, or jackassery. But the squatter currently in the White House is making a tremendous run for it in every category.

To be fair, Bierce had a 135-year advantage over Johnson. He could look back at the history of a particular brand of patriotism which our modern flag-wavers will explain to us benighted folks, is exceptional, unlike European patriotism, which to them is a lesser and ignoble kind.

They promote what they claim makes a true patriot and what does not in terms Italy’s Il Duce would have loved, equating aggressive nationalism with patriotism, dissidence with treason, love of country with love of leaders. Such upside-downism is a hallmark of right-think. They do not merely challenge progressives’ love for country but rather demand adherence of us all to Big Brother’s brand of patriotism, complete with spiffed-up versions of the Two Minutes of Hate.

Their disdain is targeted at citizens who deeply love their country, but who dare to recognize that, historically and now, it is a composite of the good, the bad, and the very, very ugly. That is, those of us who refuse to reiterate the latest version of my-country-right-or-wrong. Who acknowledge with condemnation that a jingoistic, exclusionary, authoritarian, white-supremacist patriotism is in large part what helped make the United States “great” in the worst sense of the word. Who believe dissent to be the paramount patriotic behavior. Who object to the idolatrous intermingling of militaristic nationalism with patriotism.

I can hear the hisses of those who—in the words of George Washington—practice the “impostures of pretend patriotism” and try at every opportunity to stifle dissent and fill the silence with propaganda. And even when patriotic critics deal with that by taking a knee in silent protest, they are told to shut up, stand up, and salute. And apologize for their uppityness. Thus do the pretend patriots do as they have done throughout American history—confuse dissent with disrespect, critics with renegades, patriotism with obedience.

Fortunately, 15 years after the Declaration of Independence was signed, the Bill of Rights was adopted and, in its First Amendment, freedom of speech and the press were enshrined. Allowing us all—so far, usually—to say what we want in a disrespectful voice if we so desire. That amendment is one reason I love my country and am a patriot.

I’ll admit that can sometimes be hard for someone whose Seminole ancestors were killed in three wars by soldiers flying the Stars and Stripes, with amends and apologies yet to be made, especially when modern American Indians remain mostly invisible except as stereotypes and remnants of a romanticized, white-washed past. Nonetheless, I call myself a patriot because patriots are rebels. That is not a cry for hauling out the guillotine. It comes from an optimism that patriots can and must remake the United States, just as in the past it was repeatedly remade by dissidents who rejected slavery, women’s second-class status, workers’ impotence, gender rigidity, racism’s reign. There is, it goes without saying, much left to achieve. Especially when the man now perched in the Oval Office declares there are good people among neo-Nazi protesters and cozies up to dictators so much he should be required to wear a body cam when traveling abroad.

Nothing, of course, offends right-wingers more, seems more disrespectful and disloyal, than when we dissenters, our criticisms barely escaped from our lips, claim ourselves to be patriots. They go apoplectic when we say it’s not patriotism that we disrespect but rather the pretenders who have made a fetish of it, twisted it, and commodified it.

These idolaters love the idea of dissent, the iconography of it, but jeer its reality. To them, patriots must be bootlickers. In extreme cases, jackbootlickers. Proof, as if more were needed, that even the word "patriot" itself must be recaptured from those who have hijacked it. They are not unlike Jersey City Mayor Frank Hague, who in January 1938 said:

”We hear about constitutional rights, free speech and the free press. Every time I hear these words I say to myself, ‘That man is a Red, that man is a Communist.’ You never hear a real American talk like that.”

Chinese and Russian capitalism have cost the accusation “Red” its punch, but even in our current era, the “real American” canard still carries weight.

Eleven years ago, a senator and presidential candidate by the name of Barack Obama gave a speech in Independence, Missouri, in which he said:

If you hear echoes of the Declaration in those lines, you’re not alone. Music to the ears of those of us for whom it and the Constitution are the flawed but hopeful beginning, not the end, of American ideals.

Seventy-odd years ago, George Orwell taught us how words are transformed to con the citizenry into accepting interpretations that often are the opposite of their real meanings. In “Notes on Nationalism,” written in May 1945, he said that patriotism is “devotion to a particular place and a particular way of life, which one believes to be the best in the world but has no wish to force upon other people.” Nationalism, however, is something else, he said, zeroing in on the pretend patriots of then and our own time:

All nationalists have the power of not seeing resemblances between similar sets of facts. ... Actions are held to be good or bad, not on their own merits, but according to who does them, and there is almost no kind of outrage—torture, the use of hostages, forced labour, mass deportations, imprisonment without trial, forgery, assassination, the bombing of civilians—which does not change its moral colour when it is committed by “our” side. ... The nationalist not only does not disapprove of atrocities committed by his own side, but he has a remarkable capacity for not even hearing about them. ... In nationalist thought there are facts which are both true and untrue, known and unknown. A known fact may be so unbearable that it is habitually pushed aside and not allowed to enter into logical processes, or on the other hand it may enter into every calculation and yet never be admitted as a fact, even in one's own mind.

A patriot will defend what s/he loves without hatred or any notion of superiority. But nationalism demands a belief that others are inferior, which makes it aggressive by nature, the enemy of peace, and thus the enemy of patriotism. Nationalism frames everything in "us vs. them" terms. U.S. nationalism pretending to be patriotism has led to imperialist wars, the slaughter of indigenous peoples, the repeated suppression of dissent. In times of global tension, nationalism masquerading as patriotism demolishes the capacity of people to assess the reality of threats as well as to object if they find those threats scarce.

To adopt the unconditional support the nationalists ask of us could never be an expression of love for our country, the core definition of patriotism. Indeed, it would be extremely unpatriotic to do so. For who recklessly allows harm against that which s/he loves?

Fighting for a better country is what patriotic dissidents have done from the beginning of the United States. Arrayed against them and their high principles in every case were the pretend patriots, those for whom dissent was anathema, who saw attempts to expand the nation’s democracy to the poor, to women, and to people of color as a violation of their rights, who labeled opposition to expansionism and imperialist war as outright treason.

Despite the pretenders who engaged in naked aggression against abolitionists, suffragists, trade unionists, civil rights workers, and others, these dissidents made America better. They remade America. In our time, they are lauded as icons. But in their own, they were vilified, assaulted, and—not rarely—murdered for their audacity, for their belief that the ideals in the Declaration were not pretend. We owe them. And we honor them best by imitating them.