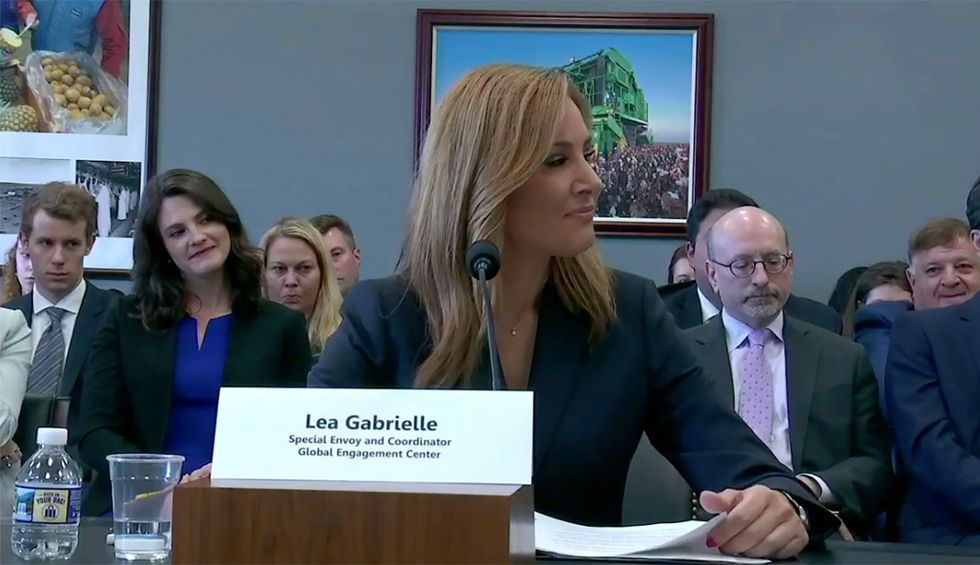 When Rep. Lois Frankel (D-FL) questioned Lea Gabrielle — a top State department official under Trump — for examples of Russian disinformation campaigns around the world she replied with a drawn-out “Ummm,” ABC reports.

“It is clear that the Kremlin has been attempting to damage America’s credibility among our allies and our partners, undermine trans-Atlantic unity, and to sow discord in target societies,” Gabrielle testified. “They covertly plant false stories.”

“What are the tales that they are telling, their fake news. What do you see?” Frankel wanted to know. “Give me a couple of examples of fake stories. Because we’ve been talking in generalities, I’d like to know what kind of information they’re spreading. What are they saying, for example?”

“Well, it really depends on the country,” Gabrielle said.

Frankel pressed her for an example.

“Anybody can help her,” Frankel said.

That’s when another official was forced to step in and chronicle all the recent instances of Russian propaganda, ranging from a false narrative about NATO exercises, political unrest in Venezuela and the poisoning of British citizens.

Gabrielle is a former Fox News correspondent, according to ABC.

In a report released last October, the Brookings institute warned that although Russia’s goals and strategies aren’t new, the Kremlin is increasingly mastering digital tools to sow division and distrust by blending the line between fiction and fact.

“Over the next few months we are going to see more disinformation campaigns, including fake websites that work together as a network to spread disinformation, fake personalities and entities on Twitter and Facebook, and manipulation of social media networks’ algorithms, including Google, YouTube, and others,” the report concluded.

“And we’re not really paying enough attention to algorithmic manipulation.”

And as artificial intelligence becomes more sophisticated, so will Russia’s propaganda campaigns.

“But soon, disinformation campaigns will become more automated, smarter, and more difficult to detect. AI driven disinformation will be better targeted to specific audiences; AI driven online entities will be able to predict and manipulate human responses; At some point very soon, we won’t be able to tell the difference between automated accounts and human entities.”