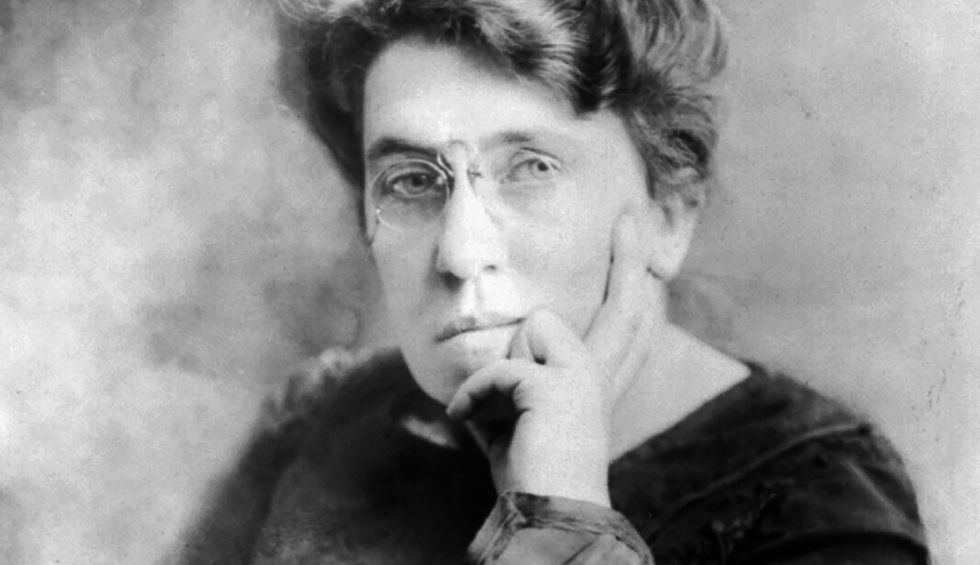 This week Donald Trump, the awful man who currently occupies the U.S Presidency, brought his racist, xenophobic, and authoritarian campaign against liberal democracy to a new low, taking to Twitter both to denounce four Democratic members of the U.S. House of Representatives, women of color all, and to imply that they are “aliens” who don’t belong in the country:

So interesting to see “Progressive” Democrat Congresswomen, who originally came from countries whose governments are a complete and total catastrophe, the worst, most corrupt and inept anywhere in the world (if they even have a functioning government at all), now loudly and viciously telling the people of the United States, the greatest and most powerful Nation on earth, how our government is to be run. Why don’t they go back and help fix the totally broken and crime infested places from which they came. Then come back and show us how it is done.

Alexandria Ocasio Cortez, Ayanna Pressley, Rashida Tlaib, and Ilhan Omar, the four women in question, are of course U.S. citizens—as the Constitution requires of all members of Congress. The first three are indeed “from” the U.S., having been born here—it is worth remembering that the Trump administration has endorsed the idea of eliminating “birthright citizenship”—and the fourth, Ilhan Omar, who first arrived in the U.S. in 1992 as an asylum-seeking refugee from Somalia, has been a naturalized citizen since 2000.

Trump’s despicable tweets, like so many of his statements, were immediately and rightly denounced as racist and xenophobic by a wide range of journalists and virtually all Democrats, though no major Republicans. (Of his many hundreds of racist comments, these tweets perhaps most resembled his 2018 comments about immigrants “from shithole countries.”)

Yet while these comments surely further fueled the vicious, racist right-wing attacks against AOC and her colleagues in “The Squad,” it would be a mistake to reduce them to their racism. For they also articulated a broader reactionary agenda that goes beyond racism and that targets the left in general.

This was made clear this past weekend by the remarks of Trump’s Sycophant Number One, Senator Lindsey Graham, who went on television to defend Trump from the charges of racism:

We all know that AOC and this crowd are a bunch of communists. They hate Israel, they hate our own country. They’re calling the guards along our border, Border Patrol agents concentration camp guards. They accuse people who support Israel of doing it for the Benjamins. They’re anti-Semitic. They’re anti-America. Don’t get down, aim higher. . .  We don’t need to know anything about them personally. Talk about their policies.

This morning Trump followed Graham’s lead, slightly shifting his rhetorical ground while doubling down on his attack:

When will the Radical Left Congresswomen apologize to our Country, the people of Israel and even to the Office of the President, for the foul language they have used, and the terrible things they have said. So many people are angry at them & their horrible & disgusting actions!

In so doing, Trump made clear that his racism, powerful as it is, is linked to a broader hostility to the left, and to a campaign of red-baiting that has been central to his Presidency—only a few short months ago, in his February 2019 State of the Union address, he declared that “we renew our resolve that America will never be a socialist country”—and that will clearly loom ever larger as November 2020 approaches.

How far will this campaign against the broader political left go in the months to come? What forms might it take if Trump were to win re-election in 2020, and have another four years to do his damage?

It is worth recalling that a hundred years ago another woman of the left drew the ire of another President, this one, Woodrow Wilson, a Democrat. As the Jewish Women’s Archive explains: “On December 21, 1919, Emma Goldman, along with 248 other radical ‘aliens,’ was deported to the Soviet Union on the S.S. Buford under the 1918 Alien Act, which allowed for the expulsion of any alien found to be an anarchist.”

Goldman, born in 1869 in Kovno, Lithuania, came to the U.S. in 1885, as did millions of Eastern and Southern European immigrants during the closing decades of the 19th century. Goldman was an anarchist; a crusader for worker rights, women’s rights, and sexual freedom; and, as both a supporter of the Russian Revolution in 1917, and an outspoken opponent of U.S. entry into World War One in 1918-19, she became a target of government surveillance and repression. The “Palmer Raids,” launched by Attorney General Mitchell Palmer in late 1919 to arrest and deport “foreign radicals,” took place in over 30 cities in 23 states; arrested between 6000 and 10,000 individuals; and led to deportation of almost six hundred resident aliens. Goldman was one of them. Along with her collaborator (and lover), Alexander Berkman, she was convicted; imprisoned; briefly detained, ironically, on Ellis Island; and then expelled from the country (while at Ellis Island, they co-wrote a powerful pamphlet, “Deportation, its Meaning and Menace: Last Message to the People of America”). While she was not originally “from here,” she was expelled less because of her ethnicity than because of her ideas.

Deportation and denaturalization is currently making a comeback. Rafia Zakaria, writing last year in The Nation on “How Trump is Stripping Immigrants of their Citizenship,” drew links between the administration’s tactics and those used a century ago against Goldman:

The Trump administration’s push to pursue denaturalization should be considered as one piece of the jigsaw that is closing off the United States to nonwhite individuals. Beginning with the Muslim ban, now upheld by the Supreme Court, extending to the vastly sped up ICE raids in areas with large Latino populations, to the detention and separation of asylum-seeking families at the border, these bits and pieces come together to reveal a worldview that accords with white nationalism.

Emily Pope-Obeda, writing last year in Jacobin on “Expelling Dissent,” described the ways that the Trump administration was upgrading the effort to deport immigrants active in the sanctuary and immigration rights movements:

This string of deportations and detentions, while appalling, are anything but unprecedented. For well over a century, the US government has used its deportation powers to suppress opposition, intimidate movements, and silence critics. Frequently, it has acted in especially targeted ways, cracking down on individual leaders to send a message to any foreign-born activists who might consider speaking out.

While both Zakaria and Pope-Obeda recall the treatment of Goldman and other “alien” dissenters, they center their accounts on the ways that Trump seeks to close borders and to enforce a racially and ethnically exclusive conception of citizenship, using the power of the state to deport “dangerous aliens” and thus to undermine immigrant rights.

Trump’s recent Tweets are clearly motivated by xenophobic racism. But they also raise the specter of an even broader targeting of individuals because of their ideas, with a special emphasis on those who either are or might be considered “socialist.” In this way, they bring to mind not simply the horrible treatment meted out to Goldman, but the treatment meted out to thousands of other WWI dissenters, most famously Eugene V. Debs, who could not be told to “go back to where you came from”—Debs was a White Anglo-Saxon Protestant from Terre Haute, Indiana—but could be told to stop criticizing the government nonetheless. Debs did not run afoul of the 1918 Alien Act.

But he did famously run afoul of the 1917 Espionage Act; his widely-publicized anti-war speech in Canton, Ohio in June 1918, led to his arrest, conviction, and imprisonment, and was part of a massive wave of anti-socialist repression (On this topic, I strongly recommend Ernest Freeberg’s Prisoner of Democracy: Eugene V. Debs, the Great War, and the Right to Dissent).

Trump’s racist Tweets are ominous both because of their xenophobia and because of their hostility to democracy. What Emma Goldman said at her deportation hearing on October 27, 1919, is worth quoting at length:

Every human being is entitled to hold any opinion that appeals to her or him without making herself or himself liable to persecution. Ever since I have been in this country—and I have lived here practically all my life—it has been dinned into my ears that under the institutions of this alleged Democracy one is entirely free to think and feel as he pleases. What becomes of this sacred guarantee of freedom of thought and conscience when persons are being persecuted and driven out for the very motives and purposes for which the pioneers who built up this country laid down their lives? And what is the object of this star chamber proceeding, that is admittedly based on the so-called Anti-Anarchist law? Is not the only purpose of this law, and of the deportations en masse, to suppress every symptom of popular discontent now manifesting itself through this country, as well as in all the European lands? It requires no great prophetic gift to foresee that this new Governmental policy of deportation is but the first step towards the introduction into this country of the old Russian system of exile for the high treason of entertaining new ideas of social life and industrial reconstruction. Today so-called aliens are deported, tomorrow native Americans will be banished. Already some patrioteers are suggesting that native American sons to whom Democracy is not a sham but a sacred ideal should be exiled. To be sure, America does not yet possess a suitable place like Siberia to which her exiled sons might be sent, but since she has begun to acquire colonial possessions, in contradiction of the principles she stood for over a century, it will not be difficult to find an American Siberia once the precedent of banishment is established. . .

I strenuously protest against this despotic law and its star chamber methods of procedure. I protest against the whole spirit underlying it—the spirit of an irresponsible hysteria. . .  the people can only profit by a free discussion of the new ideas now germinating in the minds of thinking men and women in society. The free expression of the hopes and aspirations of a people is the greatest and only safety in a sane society. In truth, it is such free expression and discussion alone that can point the most beneficial path for human progress and development. But the object of deportations and of the Anti-Anarchist law, as of all similar repressive measures, is the very opposite. It is to stifle the voice of the people, to muzzle every aspiration of labor.

Trump hates immigrants. He hates people of color. He hates worker rights. He hates journalists, and scientists, and educators. He hates democracy. He must be removed from office. For I do not think that constitutional democracy can survive another four years of his awfulness.