The myth of the 'Trump economy' is going down in flames 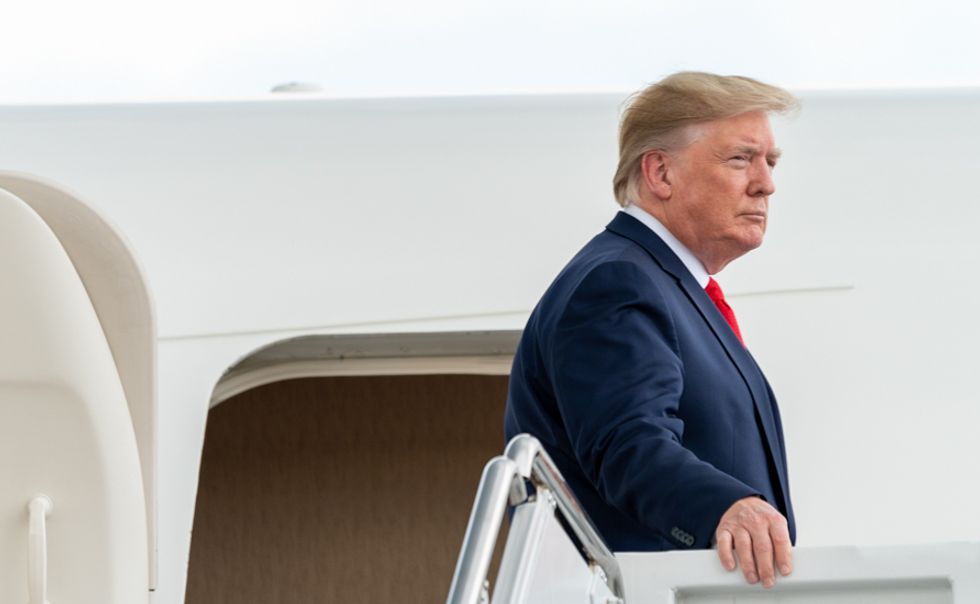 Even those who aren't fans of President Donald Trump sometimes give him credit for the strength of the American economy. I've argued before that this is largely misguided because presidents' impacts on the economy are hard to evaluate and are typically exaggerated.

The U.S. economy grew by only 2.1 percent in the second quarter of 2019, according to new data by U.S. Bureau of Economic Analysis.

"The deceleration in real GDP in the second quarter reflected downturns in inventory investment, exports, and nonresidential fixed investment," the bureau found. In other words, business investment is lagging — which is exactly what the GOP's 2017 tax cuts were supposed to stimulate. But there was never much evidence to suggest that the tax cut would actually supercharge growth — it was a vain hope of Republicans who see lower taxes as the solution to everything.

At the same time, U.S. manufacturing is in a "technical recession."

Trump himself tired to blame the Federal Reserve for the unimpressive growth, calling it an "anchor wrapped around our neck." (Of course, he appointed the Fed chair, said he couldn't even skirt responsibility if the analysis is correct.)

But others, such as Bloomberg's Colin Wilhelm, noted that Trump's aggressive trade policies may be a serious impediment to better growth.

"Trade wars seem to be dulling business investment, which slows economic growth," said Wilhelm. "Aside from domestic effects in the U.S. there's also a chilling effect on economic growth overseas."

The White House has blamed monetary policy for a slowdown but this is harder to square with strong consumer spendin… https://t.co/iDfs4k5XSI
— Nick Timiraos (@Nick Timiraos) 1564145156.0

"Seems pretty notable that the president can no longer claim even one year of 3+% growth, with last year’s GDP numbers revised down to 2.5%," she said. "After all the tax cuts and deregulation, growth is still plugging along about where it was under Obama."

CNBC's John Harwood may have had the clearest summation of the situation:

And let's be clear — we're measuring the White House's success by its own standards.

Carl Quintanilla of CNBC pointed out that, in July of 2018, Larry Kudlow, the director of the U.S. National Economic Council, said, "We are getting 3 [percent GDP growth], and it may be 4 for a quarter or two." Growth for the last four quarters since that claim has topped out at 3.1 percent, with a low of 1.1 percent in the last quarter of 2018.

And it's notable that, whatever economic boosts the government has been giving the country seem to come from government spending, which the Republican Party used to abhor as a source of stimulus. The corporate tax cuts were supposed to be an alternative to direct stimulus — a way to bolster the economy not directly through spending, but by incentivizing greater investment. But we're still waiting for that investment to emerge, even as the tax cuts blow a hole in the federal budget.

None of this is to say, of course, that the economy is a disaster. It's not (though there are some ominous signs). And as I've argued in the past, the impact of the president on the economy is typically overstated. Teasing out the cause and effect of the wide range of policies enacted by the U.S. government and global forces is an exceptionally complex endeavor.

But we can conclusively say that if the economy isn't soaring, then the president hasn't caused the economy to soar. The president and his defenders have sold him as some sort of King Midas with the power to will economic prosperity into existence. And it's just not true.

[It's] not exactly “bad news” that Obama-era growth has essentially just continued apace. But if you think there are significant downsides to Trump’s policies — like supercharging inequality or reversing decades of progress on air pollution or a rising uninsurance rate — none of this has brought us the faster growth we were promised. It’s just the same old same old.

Trump will keep selling himself as an economic wizard, of course, no matter what the numbers say. But anyone paying attention should be able to see through this self-puffery.