Republican Sen. John Cornyn is either a pathological liar or living in a parallel universe 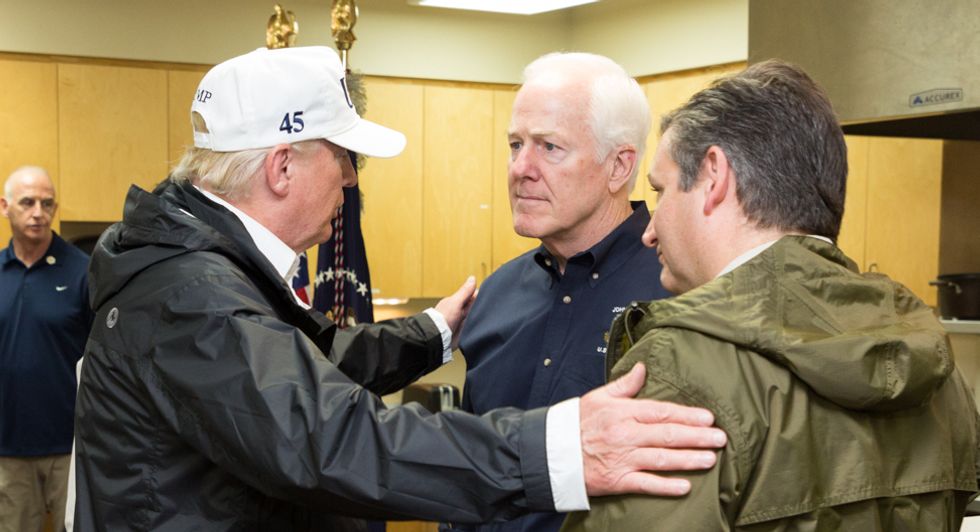 Pathological lying has worked for Donald Trump, so apparently it's the new norm for the Republican Party. Consider Sen. John Cornyn of Texas, never among the bright lights of that august body, but really stepping in it today. He responded to a tweet from Sen. Chuck Schumer, the Democratic minority leader, that pointed out that Republicans keep trying to take the Affordable Care Act's protections for people with pre-existing conditions away.

Cornyn pretty much went with, "I'm rubber and you're glue" for his return tweet, saying, "Again and again, Democrats have refused to join Republicans in guaranteeing coverage for pre-existing conditions."

Shall we count the lies? Since that failed repeal effort two years ago, Mitch McConnell has not allowed any bill having anything to do with the ACA anywhere near the floor. That repeated refusal of Democrats to join Republicans must have been happening in a parallel universe. Otherwise known as John Cornyn's head. What Democrats have refused to endorse are any number of proposals that Republicans have been kicking around that they say protect the 133 million people whose pre-existing conditions are covered, but don't do that. At all.

The real kicker, though, with Cornyn? He, along with his fellow Texas Republican Sen. Ted Cruz, filed a brief in federal court supporting the lawsuit that would overturn all of the ACA, every bit of it, including protections for people with pre-existing conditions! He. Signed. On. To. That. Lawsuit.

Apparently, the parallel universe in which Cornyn exists also doesn't have history, or the internet, or news archives, or 10 years’ worth of evidence of Republicans not giving a goddamn about whether or not you have health care.