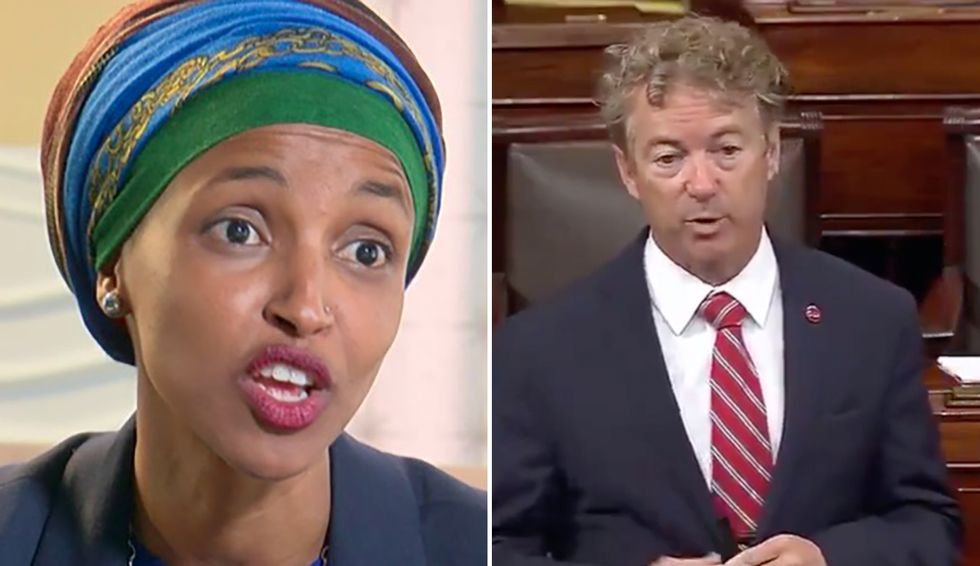 Sen. Rand Paul (R-KY) on Monday said he was “willing to contribute” an unspecified amount of money to buy Rep. Ilhan Omar a ticket to Somalia, her native country, so she can “come back and appreciate America more.”

Paul also said that Omar is “about as ungrateful as you get” for daring to practice dissent in the United States of America.

The senator made the remarks last week to Breitbart, after being asked about President Donald Trump’s tweets telling four Democratic congresswomen of color to “go back and help fix the totally broken and crime-infested places from which they came.”

Three of the Democratic congresswomen were born in the United States, but Omar emigrated to the country in 1992. Paul contended that Omar can’t criticize the United States because she won a seat in Congress as an immigrant.

“And so, I’m not saying we forcibly send her anywhere, I’m willing to contribute to buy her a ticket to go visit Somalia,” Paul told Breitbart, as reported by kentucky.com. “And I think she can learn and maybe learn a little bit about the disaster that is Somalia — that has no capitalism, has no God-given rights guaranteed in a constitution, and has about seven different tribes that have been fighting each other for the last 40 years. And then maybe after she’s visited Somalia for a while, she might come back and appreciate America more.”

The Kentucky senator has previously said Omar harbors “bitterness and anger toward the country.”

Omar previously responded to the “send her back” chant that made its debut earlier this month. Speaking with reporters, the congresswoman introduced a woman who is in the process of becoming an American citizen.

“I want to make sure that every single person who is in this country, who is aspiring to become part of the American fabric, understands that nothing this president says should be taken to heart,” Omar said. “We are Americans as much as everyone else, this is our country, and we are where we belong.”

“I told people on my election night, in the great state of Minnesota, ‘We don’t just welcome refuges, we send them to represent us in Washington.’ And as much as he’s spewing his fascist ideology onstage, telling you as citizens to ‘go back’ because they don’t agree with his detrimental policies for our country, we tell people that here in the United States, dissent is patriotic. Here in the United States, disagreement is welcome, debate is welcome, and especially in the People’s House, all of our voices are uplifted and heard.”