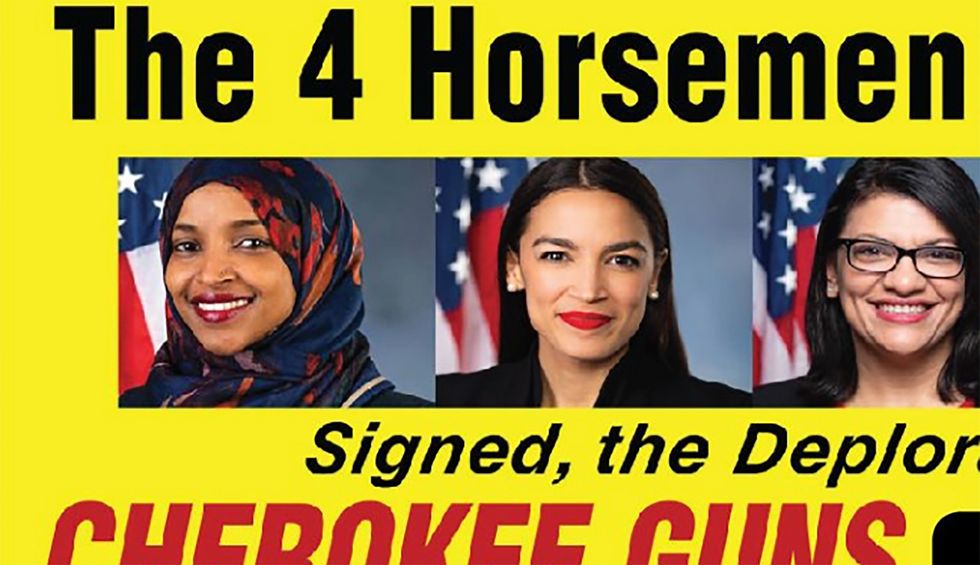 Although President Donald Trump is known for insulting Democrats in general, there are four Democratic congresswomen he has been especially obsessed with in recent weeks: Rep. Alexandria Ocasio-Cortez of New York City, Rep. Rashida Tlaib of Michigan, Rep. Ilhan Omar of Minnesota and Rep. Ayanna Pressley of Massachusetts, collectively known in political circles as The Squad. And in the small town of Murphy, North Carolina, the far-fight owners of a local gun shop, Cherokee Guns, declared their solidarity with Trump by purchasing a billboard mocking the congresswomen as “the 4 Horsemen.”

Cherokee Guns has had added an image of the anti-Squad billboard to its Facebook page, inviting customers to visit the shop and pick up a “4 Horsemen sticker” — assuming they are planning to vote for Trump in 2020. The gun shop asserts, “Alright my fellow Infidels for Trump...due to OVERWHELMING demand.... you may come by the shop (next week) and get your very own FOUR HORSEMEN COMETH STICKER.... simple.... eat a piece of bacon.... tell us you’re voting for Trump in 2020.... then get your limited edition bumper sticker!! (While supplies last!) Snowflakes and Liberals are not eligible.... sorry...”

Trump recently came under fire for tweeting that all four members of The Squad should leave the United States and return to “the places from which they came.” But AOC, Tlaib and Pressley were all born and raised in the U.S. and are lifelong U.S. citizens. Omar, meanwhile, was born in Somalia but has been a naturalized U.S. citizen since 2000.