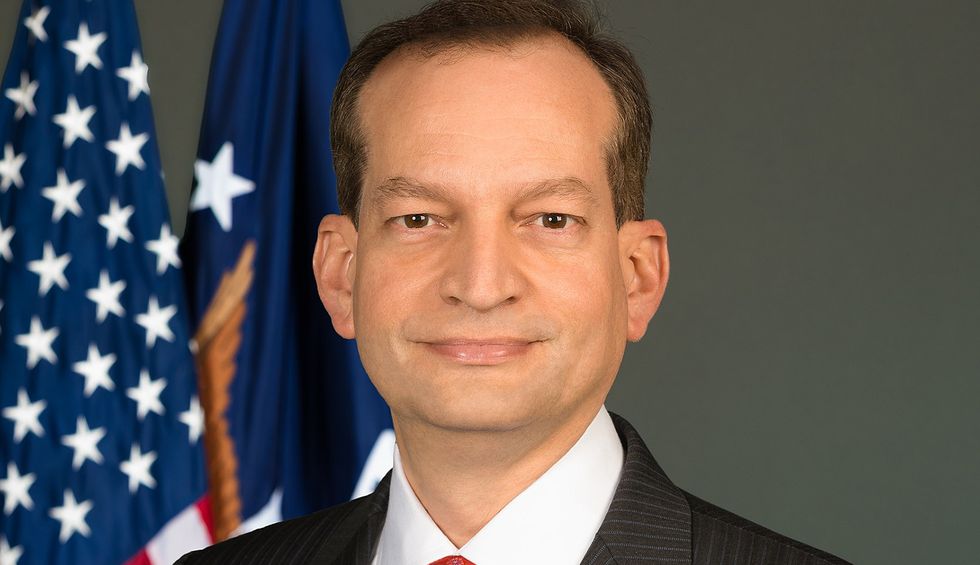 The arrest of financier and registered sex offender Jeffrey Epstein on federal child sex trafficking charges elicited fresh demands for the resignation of Trump Labor Secretary Alex Acosta, who helped Epstein secure a "sweetheart plea deal" for previous allegations while serving as Miami's top federal prosecutor over a decade ago.

Following news of Epstein's arrest late Saturday, reporters, politicians, and other observers called on Acosta to immediately step down—bolstering demands that have mounted in recent months amid a legal challenge to Epstein's deal filed by survivors.

With the Epstein arrest, Labor @SecretaryAcosta is finally getting the attention he should have gotten before Senat… https://t.co/SJBqThoPWM
— John Nichols (@John Nichols)1562503802.0

CNN opinion contributor Raul A. Reyes wrote Sunday that "Acosta's actions are worthy of bipartisan outrage and should offend every American father and mother. Acosta betrayed the vulnerable to benefit the powerful. His deal for Epstein shows a disregard for child welfare, victims' rights and Justice Department procedures. Ironically, as secretary of labor, Acosta is responsible for monitoring human trafficking."

Over the years, Epstein has been tied to various high-profile individuals, including retired Harvard Law professor Alan Dershowitz and the U.K.'s Prince Andrew as well as former President Bill Clinton and current President Donald Trump.

The Jeffrey Epstein case is a sign of a deep, severe moral sickness in this country. Everyone who shielded him (inc… https://t.co/HDgaKjE9wB
— Gravel Institute (@Gravel Institute)1562463755.0

According to the Daily Beast, which first reported on the financier's arrest late Saturday:

Epstein was arrested for allegedly sex trafficking dozens of minors in New York and Florida between 2002 and 2005, and will appear in court in New York on Monday, according to three law enforcement sources. Epstein, who owns a New York City mansion and an island in the Caribbean, was being held at the federal lockup in Manhattan ahead of his court date.

Saturday's arrest by the FBI-NYPD Crimes Against Children Task Force comes about 12 years after the 66-year-old financier essentially got a slap on the wrist for allegedly molesting dozens of underage girls in Florida.

For more than a decade, Epstein's alleged abuse of minors has been the subject of lawsuits brought by victims, investigations by local and federal authorities, and exposés in the press. But despite the attention cast on his alleged sex crimes, the hedge-funder has managed to avoid any meaningful jail time, let alone federal charges.

The new indictment—which, according to two sources, will be unsealed Monday in Manhattan federal court—will reportedly allege that Epstein sexually exploited dozens of underage girls in a now-familiar scheme: paying them cash for "massages" and then molesting or sexually abusing them in his Upper East Side mansion or his palatial residence in Palm Beach. Epstein will be charged with one count of sex trafficking of minors and one count of conspiracy to engage in sex trafficking of minors—which could put him away for a maximum of 45 years. The case is being handled by the Public Corruption Unit of the Southern District of New York, with assistance from the district's human-trafficking officials and the FBI.

Sources told the Miami Herald that Epstein was arrested at New Jersey's Teterboro Airport and "around 5:30 p.m. Saturday, about a dozen federal agents broke down the door to Epstein's Manhattan townhouse to execute search warrants." A source in New York told the Florida newspaper that Monday's bail hearing "will be critical because if they grant him bail, he has enough money that he will disappear and they will never get him."

In a series of stories from last November titled "Perversion of Justice," Herald reporter Julie K. Brown detailed how Acosta, then U.S. attorney for the Southern District of Florida, worked with Epstein's attorneys to craft an agreement that was kept secret from Epstein's victims.

Epstein "was accused of assembling a large, cult-like network of underage girls—with the help of young female recruiters—to coerce into having sex acts behind the walls of his opulent waterfront mansion as often as three times a day," Brown reported in November. "Facing a 53-page federal indictment, Epstein could have ended up in federal prison for the rest of his life."

Not only would Epstein serve just 13 months in the county jail, but the deal—called a non-prosecution agreement—essentially shut down an ongoing FBI probe into whether there were more victims and other powerful people who took part in Epstein's sex crimes, according to a Miami Heraldexamination of thousands of emails, court documents and FBI records.

The pact required Epstein to plead guilty to two prostitution charges in state court. Epstein and four of his accomplices named in the agreement received immunity from all federal criminal charges. But even more unusual, the deal included wording that granted immunity to "any potential co-conspirators" who were also involved in Epstein's crimes. These accomplices or participants were not identified in the agreement, leaving it open to interpretation whether it possibly referred to other influential people who were having sex with underage girls at Epstein's various homes or on his plane.

As Common Dreams reported in December—amid previous calls for Acosta to resign, which were sparked by the Herald's series—National Organization for Women (NOW) president Toni Van Pelt said that "Epstein plays by the same rule book as Donald Trump, Les Moonves, Harvey Weinstein, Eric Schneiderman, and other powerful men who have been revealed as serial abusers of women."

"Epstein's scant 13-month stay in a county jail—where he was even allowed to spend twelve hours a day, six days a week, at his office," Van Pelt said, "was made possible by a culture of powerful men, enabling each other, while dismissing, excusing, or demeaning the women and children they brutalize with physical and sexual violence."