Kellyanne Conway loses it and demands to know a reporter's 'ethnicity' 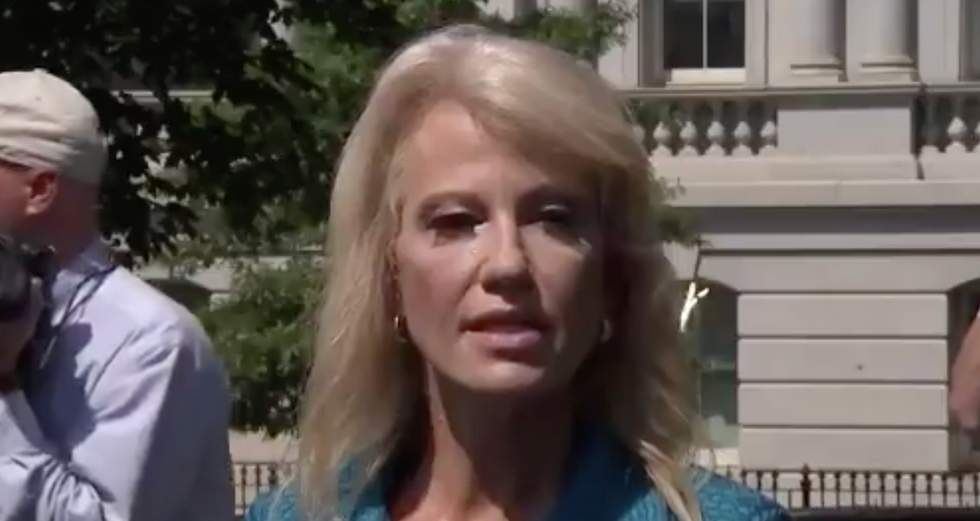 As President Donald Trump is still being hammered under the firestorm he started with his racist attacks on Democratic lawmakers, Kellyanne Conway dug the White House in even deeper on Tuesday in a combative exchange with a reporter.

Speaking in the White House driveway, reporter Andrew Feinberg of Breakfast Media asked Conway what the president was referring to when he said that progressive lawmakers — three out of four of whom were born in the United States — should "go back" to their countries.

In response, Conway demanded to know the reporter's ethnicity.

"What's your ethnicity?" she said.

"Why is that relevant?" Feinberg responded, taken aback.

"No, no — because I'm asking a question," she said, doubling down on her shocking question. "My ancestors are from Ireland and Italy."

"My own ethnicity is not relevant to the question I'm asking," said Feinberg.

She seemed to be implying that it was reasonable for the president to tell Democratic congresswoman — all of whom are people of color — to go back to the countries of their ancestors. Conway's claim, though, that this is somehow implied in the phrase "originally from" is just wrong. She is not "originally from" Ireland or Italy if she wasn't born there and never lived there. And even if she had been born elsewhere, it would still be wildly inappropriate to tell her that as an American citizen that she should now go back. And of course, the fact that the president made his claims originally about women of color, implying they don't really belong in the United States, is a demonstration of outright racist bigotry.

Conway's demand to know a reporter's ethnicity just because he is asking a question about the president's remarks is likewise wildly inappropriate. If her point was to demonstrate that most or many Americans can trace their heritage to another country as a defense of Trump's wildly racist attack, she's layering an offensive demand on top of a desperate defense of the president's bigotry.

By asking about my ethnicity (a mix of 🇵🇱 🇱🇹 🇷🇺 and 🇱🇻, I’m told) in response to my question, @KellyannePolls inadv… https://t.co/WYFRMtOodm
— Andrew Feinberg (@Andrew Feinberg)1563290331.0

After Feinberg repeatedly made clear that her question was inappropriate, Conway seemed to realize that she may have crossed a line and overcompensated by lashing out.

"A lot of us are sick and tired in this country of America coming last to people who swore an oath of office!" she said. "Sick and tired of our military being denigrated. Sick and tired of the Customs and Border Protection people I was with — who were overwhelmingly Hispanic, by the way, in McAllen, Texas — sick and tired of them — no, you don't understand, 'cause you didn't go! — being criticized. Being doxxed! By a bunch of Hollywood D-listers who have nothing else to do but sit on their asses on Twitter all day and try to dox brave men and women who are diving into the Rio Grande to save people who are drowning. Who are taking other people's babies into custody! And diapering them and feeding them."

At that, Conway had clearly lost all perspective, demanding that CBP be thanked for taking away babies from parents and separating families.