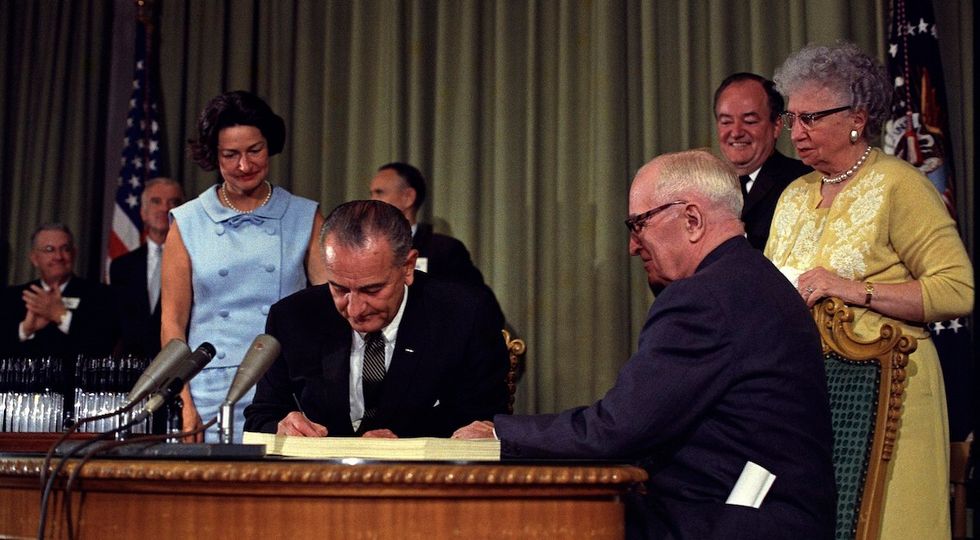 Fifty-four years ago, President Lyndon Johnson signed Medicare into law. Over half a century later, Medicare has proven its tremendous worth. Before Medicare, nearly half of all seniors were uninsured. Now, virtually all Americans who have reached their 65th birthday are covered. Medicare is extremely popular, considerably more so than private for-profit health insurance. It is also far more efficient: Medicare has administrative costs of just 1.4 percent, while the administrative costs of private for-profit health insurance average more than 12 percent.

As important as Medicare is, it should be improved. Most importantly, Medicare does not cover long-term care—neither care at home nor in nursing homes. This means that seniors who need long-term care (and can’t pay the cost, which averages $89,297 a year for a semi-private nursing home room, out of pocket) are forced to “spend down” nearly all of their assets until they qualify for Medicaid. Even the family of the pioneering physicist Leon Lederman was forced to sell his Nobel Prize medal to pay for his long-term care.

In addition, Medicare does not cover dental, vision, or hearing care despite how essential those services are. Access to these services is not just about quality of life. Failure to treat hearing loss, vision loss, and dental problems can produce devastating health consequences. Research shows that hearing loss results in the atrophy of the brain, substantially increasing the likelihood of developing dementia. Dental problems can result in malnutrition and other serious health problems. Inability to see and hear can result in greater risk of falling.

Even when services and treatments are covered, their cost can put them out of reach. Medicare charges premiums, copays and deductibles that are hard for many beneficiaries to afford. In particular, seniors are losing access to lifesaving and life-improving medicines due to the outrageous prices of prescription drugs. Since the government fails to negotiate and lets for-profit drug companies set the price, too many seniors and people with disabilities find they cannot afford the vital medicines their doctors prescribe.

Fortunately, the Medicare for All Act of 2019 would improve Medicare enormously by addressing all these areas of concern. It eliminates all premiums, deductibles, and co-pays, which currently consume 41 percent of the average Social Security check and are projected to consume 50 percent by 2030. Medicare for All means that seniors get to keep their hard-earned benefits instead of turning them over to big pharma and other for-profit corporations.

Under Medicare for All, seniors would pay less out of their pockets—and they would receive more. They would receive the long-term care and services now only available to those who impoverish themselves. They would gain dental, vision, and hearing care. They would have access to prescription drugs at a far lower cost, since the legislation includes a powerful provision to take on big pharma monopolies.

How can the bill accomplish this? By expanding Medicare to everyone. The United States spends twice the percentage of gross domestic product as other countries spend on health care but with worse health outcomes and without covering everyone. Our patchwork system of health care is extremely wasteful.

Not surprisingly, those corporations who profit from this system want to keep the massive profits they reap at patients’ expense. To achieve this end, they, and the politicians whose campaign coffers they fill, are spending massive sums on anti-Medicare for All propaganda. The primary target of that fearmongering propaganda? Seniors.

Big pharma, big insurance, and their bought and paid for politicians are doing their best to scare seniors into thinking Medicare for All would hurt them, when exactly the opposite is true. They want to divide young from old so they can continue exploiting everyone.

Seniors should celebrate Medicare’s 54th birthday by rejecting the fear-based propaganda, and enthusiastically embracing Medicare for All. Of course, many seniors have friends and family members who are among the approximately 87 million Americans under age 65 who are inadequately insured and desperately need the security Medicare for All would provide. But even in a hypothetical world where seniors cared about no one but themselves, supporting Medicare for All would be squarely in their self-interest.

Seniors must lead the way. I turn 70 in February. I am a Medicare beneficiary. I have wonderful children and grandchildren whom I care deeply about. Consequently, all of this is very personal for me. We seniors know better than anyone how important Social Security and Medicare are.

Social Security and Medicare are proof that the American people can come together through our representatives in Washington to improve the lives of all of us. Now is the time to carry out the vision of Medicare’s founders. It is time to improve Medicare and extend it to everyone.

From the start, Medicare was intended as a first step toward national health insurance. Robert M. Ball, a key architect of Medicare, laid this out clearly in a 1995 essay:

“[A]ll of us who developed Medicare and fought for it … had been advocates of universal national health insurance. We all saw insurance for the elderly as a fallback position, which we advocated solely because it seemed to have the best chance politically ... [W]e expected Medicare to be a first step toward universal national health insurance, perhaps with ‘Kiddicare’ as another step.”