Many progressives have a conservative belief system — can we all come together? 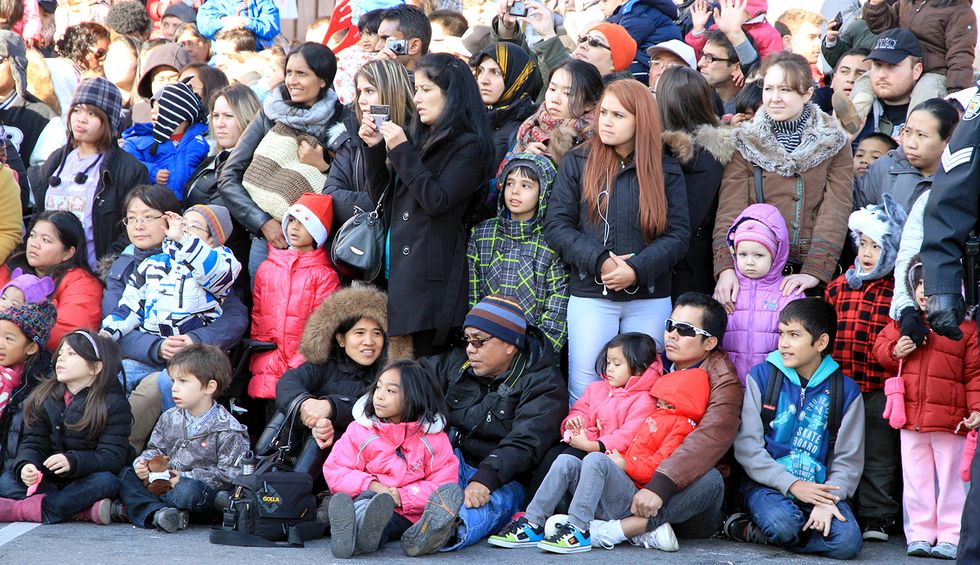 Royalty-free stock photo ID: 123551527 TORONTO - NOVEMBER 18: Families during the annual Santa Claus Parade on November 18, 2012 in Toronto. The event is one of the biggest in North America and the oldest annual parade in the world.
Simon Greer
,
Independent Media Institute
and
Simon Greer
July 16, 2019

It’s part of my regular commute, but I continue to draw inspiration as I drive into Manhattan’s Midtown tunnel and read the words E Pluribus Unum minted on the giant golden door of the newly renovated tunnel. To me, it means that through our individual uniqueness and our diverse, different traditions, a whole cloth can be made—but the distinctiveness of each (individual and group) thread is allowed to flourish. By stitching these fabrics together, the beauty of each particular tradition is more visible.

But this interpretation is under siege from powerful factions in society. The “particular” tribes and traditions that comprise this whole American cloth seem to be increasingly dominated by the tribalists, nationalists and zealots who seem fearful of other particular groups and believe their group must dominate. The public conversation suggests that these tribes are growing more extreme. Similar to the way patriotism has been wrongly occupied by the ultra-nationalists (who distort the true meaning of being a patriot), the occupation of the particular by the tribalists is threatening to tear our carefully stitched fabric apart.

On the other hand, in opposition to them, we find the increasingly strident voices of secular, unaffiliated progressives who argue against the tribalists’ views with claims of universalism and an increasing disdain for particular traditions, clamoring instead for blended multiculturalism. There are far too few voices in public life today who see the beauty in the uniqueness of traditions, are sympathetic to claims of distinctive national identity and stand firmly in a tradition to oppose assertions of supremacy from any one camp.

Ironically, many secularists claiming the mantle of “tolerance” are part of an increasingly intolerant group when it comes to others’ political views. According to a 2013 Gallup poll, tolerance of interracial marriage has gone up from only 4 percent in 1958 to 87 percent in 2013. But on the other hand, according to a recent PRRI poll, marrying across political party lines, which was a concern to less than 5 percent of the population in 1960, is in 2019 viewed negatively by 35 percent of Republicans and 45 percent of Democrats.

And these surprisingly intolerant universalists seem to lack the moral grounding—the spirit of love, humility, curiosity, compassion, forgiveness and redemption—that each particular tradition, at its best, can bring to helping America live up to its promise.

At the same time, we know the “link-less,” or those who don’t feel connected to any family, tribe or tradition, can fall prey to extremists in all forms. So how do we reclaim the particular from the tribalists? How can we provide those powerful links to those without them? And, how do we thread the needle of the diverse particulars that contribute to a universal that has a claim on more of us?

Today, these questions about the relationship between the universal and particular continue to play out all around us. In one definition of progress, we are envisioned to be blending into one universalistic, multicultural American tradition. In this view, we become less particular and more universal. American values define us, and we make from many, one.

Others argue that we can’t knit the universal out of nothing. The only true road to a viable future of coexistence is achieved through our thriving particular traditions. Progress is not that we all become nothing and the same, but that we ground ourselves deeply in our own traditions and use those to bridge to a universal understanding.

While each couple seems committed to this particular/universal approach, navigating it is challenging, and they are seeking to do so at a complex moment. We have lived through 40 years of austerity and scarcity, both rhetoric and economic reality, as a very small segment of the population takes home a larger and larger share of the pie—meaning that families and tribes have good reason to worry about their kids being worse off than they are. History has shown us that it is harder to be generous to others when you see less and less for you and yours.

So, we explored if the particular can be a road to universal. And it is not entirely straightforward. There are lots of ways our particulars can stand in the way of a universal. We wondered: Does a particular value give permission not to attend to areas with the greatest need but instead to prioritize “our people,” and is that in tension with universal commitments? We heard three couples say they value giving to your own first (one of those, the African American couple, say they feel their own is the greatest need, and the other two couples say their tradition teaches to care for their own first). Ironically, the white couple with “weakest” tradition says they generally value giving most to the greatest need even if it’s not their own.

It’s easy to see how some groups already in power who stick to and maintain their own tribes have been pursuing an effort to protect their power and control rather than spread prosperity to other groups.

Some will argue we just wrap ourselves in the Declaration of Independence and the Constitution and the symbols and history of America, and through that we build a universal American culture that works for us all—leaving behind the divisiveness inherent in our particular traditions. But I think we can’t afford to leave the particular to the extremists, nor do I think there is a road to the universal without it.

So while the tribalists and the secular unaffiliated seem to be driving our politics, the particularists need to rebuild and reclaim a seat at the table, or we are on a collision course.

There are lessons from the particulars that benefit us all. There seem to be values that bind us through and across the traditions. In each particular tradition, the importance of family and faith came through as these four couples’ top values. Even as each particular tradition draws each couple to their own, it also engenders in them a profound respect and appreciation for the importance of being there for our families and grounding our lives in our religious, faith and spiritual traditions. The strength of the particular can actually inspire a sense of honor for other traditions and a bond of understanding as to why each couple values and invests in their particular faith and family traditions.

After faith and family, across all four couples and their respective traditions, a rejection of materialism came through as another animating and shared value. It wasn’t that they disdained material comforts in an ascetic sense, but there was some common teaching across their traditions that said that material possessions and wealth accumulation were not the top priority.

Interestingly, all the traditions assembled in the room called for helping out others and for our shared journey to freedom and a better tomorrow. The Muslim couple shared a deeply instilled lesson their religion teaches about the obligation to help those in need with your hands, and if you can’t do that to help with your tongue, and if you aren’t able to do that then at least to help with your heart. The Jewish tradition offers its Exodus story and the journey of a whole people from slavery to freedom. This Exodus narrative meaningfully informed the stories about survival, liberation and freedom that are a crucial part of the tradition that the African American couple explained they seek to maintain and pass along to their daughter. And that African American experience and narrative has made an enormous contribution to the evolution of America toward its promise. Finally, from the more conservative white Christian couple, ideas like love, redemption, and revelation inform how they contribute to the issues our country faces today.

In a conversation about immigration, the husband of the white Christian couple was quick to say, “If I was living in a war-torn or deeply troubled nation, there is no doubt in my mind I would put my daughter on my back and swim across rivers, climb mountains, cross a desert—whatever it took to get her to safety.” He has enormous compassion for the immigrants coming into the country right now at the Southern border. To him, as a Christian, his moral compass leads him to empathy for other communities.

We can build the universal from the tribal by:

Maybe in the end, our common ground will come from something as basic, yet profound, as parenting. We all have parents or are them (or if we don’t, there is a common concern for children others are raising), and in that way it is universal. But those relationships are unique and particular. No one else has those specific relationships, and yet that experience is universal. Maybe we start there.

Simon Greer is a writing fellow for Face to Face, a project of the Independent Media Institute. He has been involved in social change work for more than 25 years. Greer is the founder of Cambridge Heath Ventures, a strategic advisory firm that works with private sector companies, purpose-driven organizations and governments to help them overcome their most pressing challenges. Greer is also a leading thinker, practitioner and speaker on organizational design, unconventional strategies and common good politics.

This article was produced by Face to Face, a project of the Independent Media Institute.