‘I didn’t say that, they did’: Trump throws his supporters under the bus for ‘send her back’ chant — but he claimed the same about ‘lock her up’ 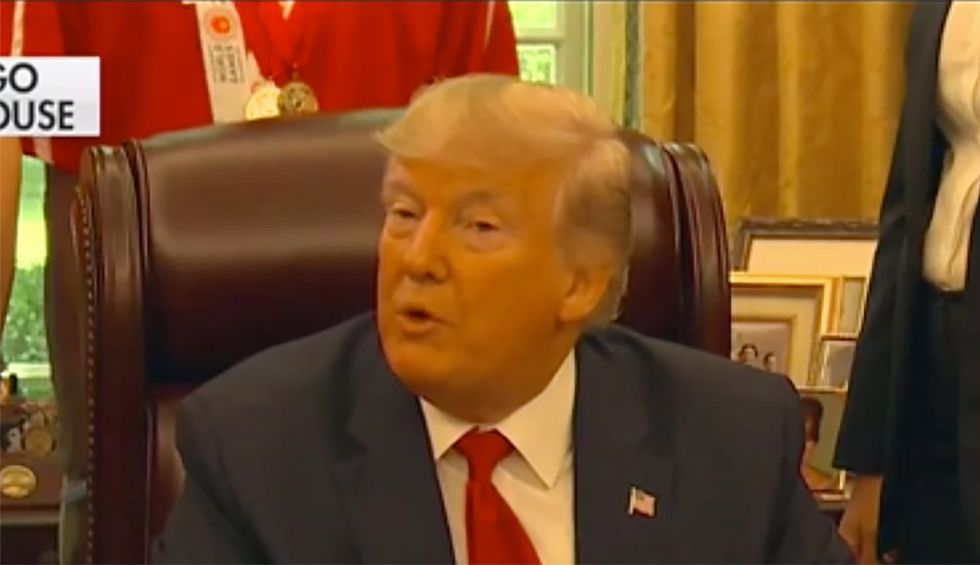 President Donald Trump on Thursday claimed he “was not happy with” his crowd's chants of "send her back" during a campaign rally Wednesday in North Carolina. But, as the Washington Post’s Aaron Blake notes, the president said the same in July 2016 about his supporters’ infamous “lock her up” chant directed at former Secretary of State Hillary Clinton.

Trump on Thursday spoke with reporters in the Oval Office amidst his continued attacks on four Democratic congresswomen of color, including Rep. Ilhan Omar (D-MN). He claimed he “did” stop his supporters from chanting by “speaking very quickly,” despite video from the event showing he clearly waited 13 seconds to speak.

He went silent for more than 13 seconds to let the chants proceed, then kept attacking Omar without rejecting the c… https://t.co/vlQx2YBWzI
— Daniel Dale (@Daniel Dale) 1563469301.0

“It really was loud — I disagree with it, by the way, but it really was quite the chant," Trump said. "And I felt a little bit badly about this, and I will say this I started speaking very quickly. But it started out really quickly."

“I was not happy with it, I disagree with it,” he continued before throwing his supporters under the bus: “But again, I didn’t say that, they did.”

“But I disagree with it,” he added.

When a reporter pointed out that the chant echoes what the president himself said in his original tweets about the four Democratic congresswomen, Trump insisted, “if you examine it, I don’t think you’ll find it.”

Fox News reported the president as having “disavowed” the comments by his supporters, but alas, we’ve seen this dance before:

Watch his Oval Office interview below, via Fox News: