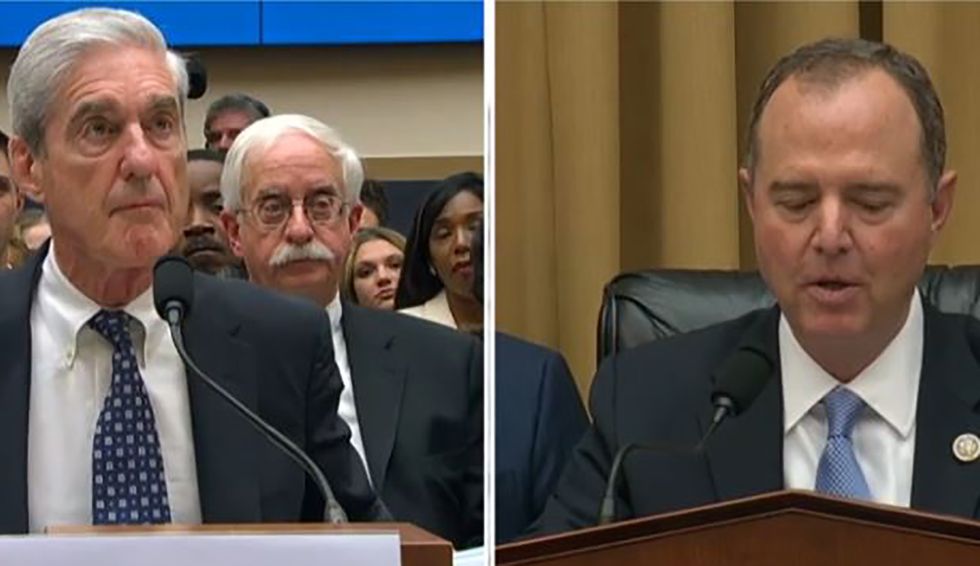 In his sole previous public statement regarding his investigation into the Donald Trump campaign's alignment with a Russian criminal conspiracy to interfere with the 2016 presidential election, former special counsel Robert Mueller emphasized to all Americans that this interference was the most important part of his report.

"And I will close by reiterating the central allegation of our indictments, that there were multiple, systematic efforts to interfere in our election," Mueller said, in even graver tones than usual. "And that allegation deserves the attention of every American."

His advice has largely gone unheeded. The details of Trump's obstruction of justice in the report were both vivid and undeniably criminal, and as such captured most of media attention in the wake of the release of the Mueller report. That shift in focus is understandable, but it's also frustrating. Because the Russian conspiracy — and the fact that the Trump campaign welcomed that conspiracy, and repeatedly tried to engage with it — is the source of most of the indictments, guilty pleas and convictions stemming from Mueller's investigation.

So it was no surprise that Mueller seemed to come alive a bit more during Wednesday afternoon's hearing before the House Intelligence Committee. Unlike the morning's hearing before the Judiciary Committee, the afternoon session focused more on Mueller's investigation into Russian election interference and the Trump campaign's unsavory connections to it — an investigation which has led to convictions or guilty pleas for former Trump campaign chief Paul Manafort, former national security adviser Michael Flynn, former deputy campaign chair Rick Gates and onetime campaign aide George Papadopoulos. (Trump's longtime personal lawyer, Michael Cohen, is an ancillary figure who was snagged for campaign finance violations unrelated to the Russia scandal.)

The Mueller report makes it clear that Trump knew about the Russia conspiracy, and issued public instructions to guide that conspiracy's efforts; that Manafort shared private information with a Kremlin-linked consultant who he hoped would help get him out of debt; that Trump and his associates clearly intended to profit from their Russian connections; and that the Trump campaign made multiple efforts to work with the Russian conspiracy to steal emails from Democrats and release them to the public.

The Democrats have a problem here, admittedly. Mueller's report also makes clear that while his team found evidence of a criminal conspiracy, it was not considered enough evidence to indict anyone directly involved with the Trump campaign, largely because the standard for conspiracy is really high. Mostly, the report shows that Trump and Russians colluded implicitly, learning about each other's efforts and helping each other but not actively communicating with each other or coordinating those efforts. Because of that, Republicans have consistently pushed the line that Mueller found "no collusion."

So Democrats' goal during the afternoon hearing was clear: Underline that the sheer amount of corrupt links to Kremlin-associated people and groups, and the widespread efforts at a criminal conspiracy should, all on their own, scare the pants off Americans — notwithstanding the absence of an indictment.

On that, they did fairly well, particularly at the top. Intelligence Committee chair Rep. Adam Schiff, D-Calif., shot off a bunch of rapid-fire questions that established exactly how gross the Trump campaign's behavior was in and around the Russian conspiracy.

Schiff:  Apart from the Russians wanting to help Trump win, several individuals associated with the Trump campaign were also trying to make money during the campaign and transition. Is that correct?

Mueller: That is true.

Schiff: Paul Manafort was trying to make money or achieve debt forgiveness from a Russian oligarch?

Mueller: Generally, that is accurate.

Schiff: Michael Flynn was trying to make money from Turkey.

Schiff: Donald Trump was trying to make millions from a real estate deal in Moscow.

Mueller: To the extent you're talking about the hotel in Moscow?

Schiff: When your investigation looked into these matters, numerous Trump associates lied to your team, the grand jury and to Congress?

Mueller: A number of persons that we interviewed in our investigation, it turns out, did lie.

Mueller: He was convicted of lying, yes.

Schiff: Paul Manafort, in fact, went so far as to encourage other people to lie.

Schiff: Michael Cohen, the president's lawyer, was indicted for lying?

Schiff: He lied to stay on message with the president?

Mueller: Allegedly, by him.

Schiff: And when Donald Trump called your investigation a witch hunt, that was also false, was it not?

Schiff's questioning hopefully laid bare to Americans what people who already have read the Mueller report understand, which is that the Trump campaign's contact with the Russian conspiracy to interfere with the election was not incidental or innocent, and that multiple Trump officials, knowing what they had done was wrong, lied to cover it up.

Luckily for the Democrats, Mueller was more open-handed with his assessments of the ugliness of the behavior of Trump and his associates than in the morning session. He repeatedly expressed moral judgment regarding Trump's behavior when it came to encouraging the Russian conspiracy and the work of WikiLeaks, which was used by the Russian conspiracy to publish stolen documents.

When Mueller asked what he thought about Trump's repeated encouragements to WikiLeaks in its efforts to publish items stolen by Russian spooks, he responded cautiously but clearly: "Problematic is an understatement in terms of what it displays of giving some hope or some boost to what is and should be illegal behavior,"

Later, under questioning by Rep. Peter Welch, D-Vt., Mueller confirmed that there was indeed some evidence of conspiracy between the Trump campaign and the Russians, but not enough evidence to file charges.

When Welch followed up by asking Mueller whether it's "a new normal" for campaigns to collude with foreign conspiracies to interfere with American elections, Mueller said grimly, "I hope this is not the new normal, but I fear it is.”

Mueller was referring, however obliquely, to the fact that the Russians are almost certainly going to help Trump again — even if they have to break the law again to do it — and Trump openly and unabashedly plans to accept that help. This time, he'll have the power of the U.S. government at his disposal to aid him in that effort.

Because of this, it perhaps isn't surprising that Mueller came out of his shell a bit more at the end of his testimony, agreeing with Schiff that it's "unpatriotic" and "wrong" to accept help from foreign governments, as Trump plans on doing. Mueller also added that it's generally a crime. But Trump, who has escaped accountability for more than two years and who knows that the House Democratic leadership is still scared of impeachment, doesn't seem to care.
Report typos and corrections to: feedback@alternet.org.
#story_page_ below_article