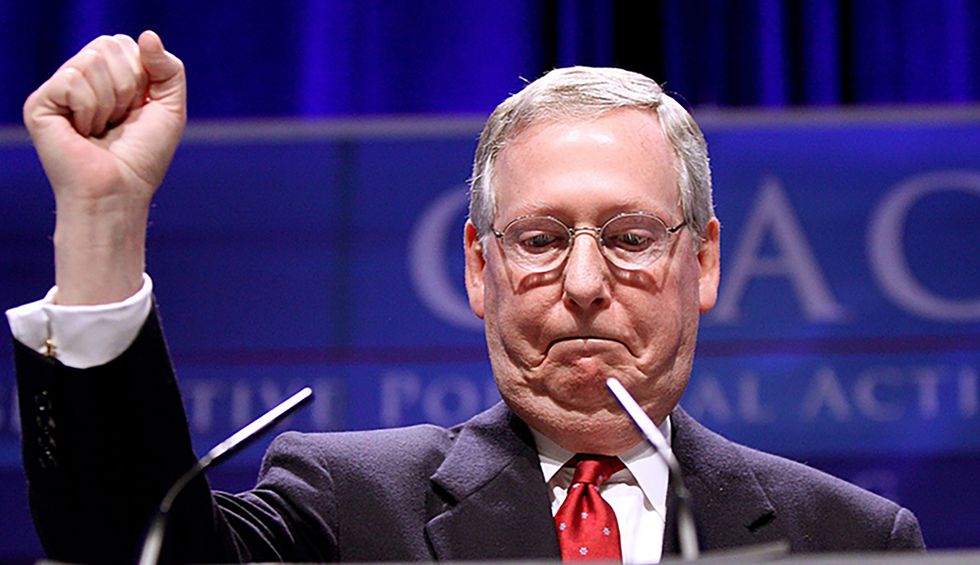 After Donald Trump ignited a firestorm by launching a racist attack on four Democratic members of Congress, the Beltway press last week temporarily revised a time-honored journalism tradition of forcing members of the president's party to respond publicly to controversial behavior. The results were utterly predictable, of course, with most Republicans refusing to criticize Trump's latest bout of open bigotry. But even the recent media questions for the GOP seemed muted, given the stunning and historic nature of Trump's racist behavior.

The sad truth is, the press mostly gave up a long time ago on holding Republican lawmakers accountable for Trump's erratic behavior. Faced with a party that has completely capitulated to Trump's unbalanced ways, reporters seem to have lost interest in the pursuit.

Why isn't there constant, nonstop coverage detailing how radical the Republican Party has become, and how any hints of dissent in the age of Trump are cultishly hidden from view? Instead of vivid portraits of a party abandoning its principles as GOP lawmakers obediently fall in line behind Trump's nasty behavior, we get coverage about how savvy Republicans are for holding their tongues about Trump and refusing to hold him accountable—about how strategic Republicans are being in allowing someone like Trump to maintain a stranglehold grip on the party.

Indeed, Republicans seem to have cracked the media code: By remaining devoutly loyal to Trump—or, at least, obediently silent—they've drained the oxygen the press needs to file stories about the type of turmoil Trump may be creating in the party with his buffoonish and offensive antics. Now entirely bored with the prospect of asking nonemotive Republican lawmakers for their take on Trump's latest outrage, journalists for the most part have stopped trying to hold party members accountable for Trump's actions.

We saw a brief flurry of activity in the wake of Trump's racist tirade in recent days. But the media pursuit of Republicans seemed restrained compared to the avalanche of coverage that would accompany demands that basically every elected Democrat in the country provide a comment if a Democratic president ever acted as hatefully and erratically as Trump has this week—or for the last two years.

Newsrooms seem to have simply accepted GOP silence. Senate Majority Leader Mitch McConnell "makes a practice of avoiding comment on remarks by President Trump that have electrified social media," The New York Times recently reported. Republicans "also believe that, in most cases, the firestorm lasts only so long and will be quickly followed by the next iteration, making it pointless to get caught up in the repeating cycle." Oh, well; I guess that takes care of that. Apparently now, if a political party essentially takes a vow of silence with regard to hateful behavior by the head of that party, the press shrugs its shoulders and moves on, abandoning all efforts to hold public officials accountable for those they support politically.

After being worn down by the GOP's cowardly capitulation to Trump, reporters have most often given Republicans a pass. Simultaneously, the press has decided to devote its time and resources to playing up dissension within the Democratic Party, where members are more open and honest about their interparty conflicts. The Beltway press in recent weeks has given significant time and space to the story of internal dissension with the Democratic House caucus, which centers on a handful of freshman Congresswomen and their policy conflicts with Speaker of the House Nancy Pelosi. The press has consistently leaned on the "civil war" narrative in reporting on Democrats, as fewer than five House members wage a public battle with the leadership. Contrast that to how reporters are playing Republican reaction to Trump in recent days.

"While a smattering of Republicans chastised Mr. Trump on Monday, most party leaders in the House and Senate and much of the rank-and-file remained quiet about the president’s weekend tweets directing dissenters to ‘go back’ where they came from," the Times reported. Interestingly, that language also perfectly sums up the so-called Democratic civil war, in which most "party leaders" and "much of the rank-and-file" have remained quiet on the issue. But for some reason, the two similar scenarios are covered quite differently. When just a handful of Republicans criticize Trump, it illustrates party unity. And when just a handful of Democrats criticize Pelosi, it illustrates a civil war.

Obviously, the circumstances are different in that a lot more Republicans ought to be criticizing Trump for his blatantly racist attacks on sitting members of Congress. And I'm not suggesting the internal strife within the Democratic Party isn't news, because it is. But there is a double standard in play with how the press treats each party in terms of members having to answer for prominent party leaders.

We also saw that recently with coverage of Joe Biden and Trump. Both made headlines for how they have treated women in the past, although the actual behavior couldn’t be more different. But only one party was pressed on the issue of accountability. Last month, longtime advice columnist and writer E. Jean Carroll claimed that Trump had once raped her inside the Bergdorf Goodman department store in New York City, when he lunged at her and pushed her up against a fitting room wall. That disturbing news story broke on a Friday afternoon and was completely ignored by all the Sunday network morning shows two days later. None of the Republicans who appeared on the show were asked about Trump’s behavior, or asked to condemn it. Yet last winter, when some women complained about the way Joe Biden interacted with them, especially with unwelcome touching in public, the allegations were covered extensively on the Sunday shows.

Note: Democrats were repeatedly pressed about whether Biden's behavior was "disqualifying," while Republicans weren't even asked about a rape charge against Trump.

The signal the press is sending remains clear: Republican cowardice in the age of Trump gets a pass.