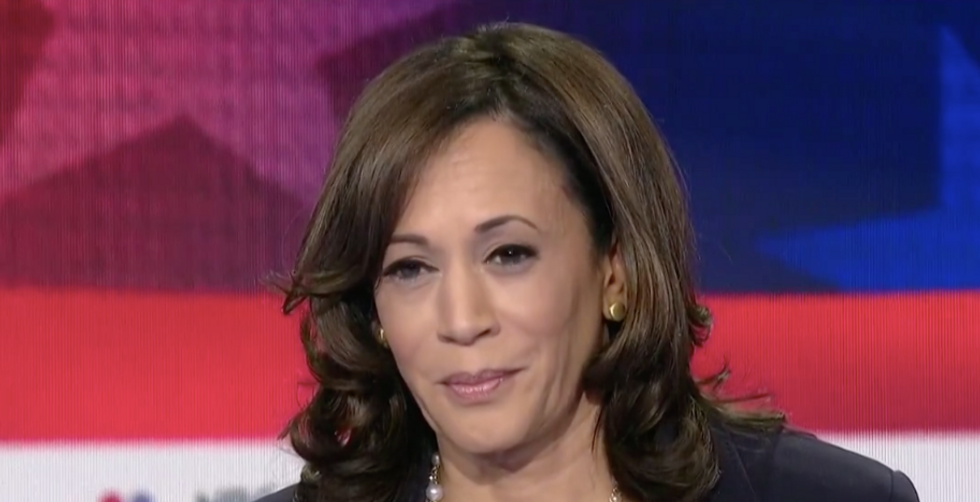 Sen. Kamala Harris has become the latest presidential candidate to unveil a health care plan. Her proposal would take current Medicare, including the private plans known as Medicare Advantage, and extend it to the entire population. Her staff says that her plan would sharply limit out-of-pocket costs and cap premium rates at current levels.

As presented, the Harris plan is substantially better than Joe Biden’s, and is a considerable improvement over most of the other health proposals put forward by other Democrats. It recognizes that today’s out-of-pocket health care costs are unsustainable for most Americans, even those with “good” insurance. Unfortunately, it still falls short of the Medicare for All plan offered by Sen. Bernie Sanders and Rep. Pramila Jayapal.

For one thing, her numbers don’t work. And her plan has an overarching, fatal flaw: It relies on the benevolence and good intentions of America’s health insurers.

American health insurance corporations, including the ones behind most Medicare Advantage plans, have a documented history of disregarding patients’ health and well-being when it threatens profits. Today’s Advantage plans are conducting a covert war against single-payer Medicare, posing an existential threat to the system most Americans picture when they think of Medicare.

Its defenders will liken the Harris plan to certain European models of health care. But, unlike their European counterparts, American insurance companies have developed two forms of troublesome expertise: political manipulation, and predatory marketing. These twin traits have twined around the American health system like strands of a double helix, and they will strangle the Harris health plan.

Out-of-pocket costs (copays and deductibles) play a major role in determining which plan people choose. The Harris plan is still somewhat vague on that score, although Harris and her aides have been offering some clarification.

CNN quotes a “campaign aide” as saying her plan would limit out-of-pocket costs to $200 per year. If true, that would be a significant improvement over the financially devastating status quo.

The other major household cost is premiums. One of the great advantages of today’s Medicare is its low premiums. If you register on time, there is no charge for Medicare Part A (hospital coverage). The standard monthly premium for outpatient care (Part B) is $135 per month, and the average cost for drug coverage is $34 per month. (Remember, these premiums apply to the costliest age group—the elderly.)

Would Harris extend these low premiums to the general population? Apparently not. She has emphasized that, while the Sanders plan adds a 4 percent tax on income above $29,000, she wouldn’t assess new taxes on households making less than $100,000 per year. HuffPost’s Jonathan Cohn adds:

“Harris campaign uses the terms taxes & premiums interchangeably in this context (as many people do). So, campaign official confirmed to me, when they say no new taxes for <$100k household income, they also mean no new premiums.”

“No new premiums” isn’t very clear, however. If it means that households won’t pay more than they pay today, that’s not nearly as good as it sounds. Under the ACA, many lower-middle-income households are paying more than 10 percent of their income for premiums, thanks to a design flaw known as the “subsidy cliff.”

Many other middle-income households pay more than 4 percent in premiums. That means many working families would pay substantially less under the Sanders proposal. The Harris campaign should be pressed to clarify their numbers, but right now they don’t look good for working families.

Call it “offensive underwriting.” It involves terms like “adverse selection” and “cherry-picking,” but it basically comes down to this: Health insurance corporations (for whom I once worked) will go to extraordinary lengths to make a profit. Under Medicare Advantage, as Diane Archer and I wrote recently, those plans recruit people who are less likely to be sick. If they need medical care, enrollees often find themselves subject to onerous utilization rules, denials of care, and restrictions on their choice of provider.

Offensive underwriting “dumps” sicker people into the public plan, harming the public plan’s bottom line and making it appear less efficient than it is. It also adds actuarial and administrative costs to the entire Medicare system.

Increasing monopolization is another concern. Open Markets Institute reports that “the percentage of the Medicare Advantage market controlled by the top four largest insurers increased from 48 to 61 percent nationwide between 2007 and 2015.” Under the Harris plan, this trend is likely to continue and worsen, leaving the public more vulnerable to the actions of a few corporations.

Private plans have repeatedly let people down in their time of need. The government winds up sponsoring a bait-and-switch, as private plans are often deficient in their care when these “healthier” enrollees develop a health problem. In the meantime, they will work ceaselessly to skim the healthy, deny care to the sick and injured, and rewrite the political rules to their benefit.

With the full level of benefits and coverage offered under the Sanders/Jayapal plan, and something approaching that in the Harris proposal, there would be no need for private health insurance. Other than political timidity, there is no sound reason to open the door to the insurance industry’s corrosive business practices.

The 10-year transition period leaves time for lobbyists to undermine the Harris plan, which they would immediately set about doing. Harris undermines her own proposal and invites this kind of maneuvering when she writes:

“Throughout this [transition] period, I would also ensure the new system of Medicare for All meets clear benchmarks before asking people to join the plan. Has the public Medicare plan fulfilled its promise of high-quality coverage without unaffordable cost-sharing? Have we meaningfully expanded coverage to the uninsured? Have we reduced costs for middle-class Americans and working people?”

Any minimally competent Medicare expansion plan would meet all these objectives. By raising unfounded concerns about her own plan, Harris is opening the door for precisely the kind of gamesmanship and political corruption the health industry specializes in. PR flacks will tout the phony ‘advantages’ of private insurance, demagogues will say the plan has failed Harris’ tests, and lobbyists will persuade politicians to undermine it with campaign contributions and other forms of legalized political corruption.

In the end, we’re likely to find ourselves exactly where we are today: with a Democratic plan that has been damaged before it can be fully rolled out. Kamala Harris’ plan is too fragile, too complex, and—most of all—too trusting of the predatory private sector to succeed.