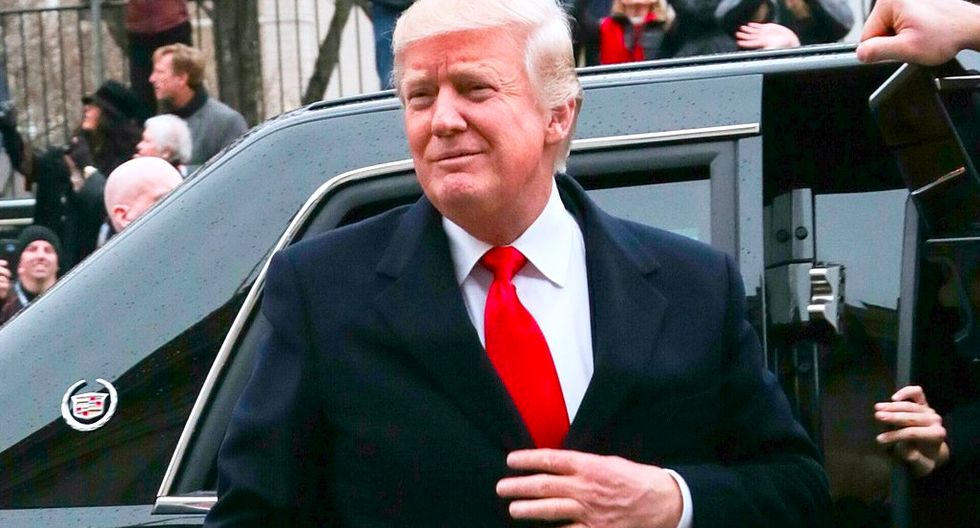 President Donald J. Trump steps out of the motorcade during the 58th Presidential Inauguration parade in Washington, D.C., Jan. 20, 2017. More than 5,000 military members from across all branches of the armed forces of the United States, including Reserve and National Guard components, provided ceremonial support and Defense Support of Civil Authorities during the inaugural period. (DoD photo by U.S. Army Spc. Abigayle Marks)
Kerry Eleveld
and
Daily Kos
July 08, 2019

The AP reports that the U.S. Attorney’s Office in Brooklyn sent a "wide-ranging subpoena" to Trump's inaugural committee in search of financial records corresponding to 20 different people and business entities. Every one one of them has something in common: Broidy. Federal investigators are examining whether Broidy traded things like access to Trump in order to secure business contracts for his global security firm Circinus, thereby violating the Foreign Corrupt Practices Act. Broidy's attorneys maintain that their client did nothing wrong.

The Brooklyn investigation into Broidy seems to be taking place alongside a separate probe in Manhattan examining whether foreign entities unlawfully contributed money to the record-setting $107 million inaugural fund.

Last year, Sens. Elizabeth Warren of Massachusetts and Richard Blumenthal of Connecticut asked the Justice Department to look into whether Broidy leveraged his proximity to Trump as "a valuable enticement" to foreigners who could advance Broidy’s international business interests.

Broidy has pleaded guilty to corrupt practices in the past, including a massive scheme a decade ago in which he lavished nearly $1 million in gifts on New York officials, who then invested some $250 million of the state's pension fund with Broidy.

Broidy served as RNC finance chair from 2006 to 2008. Then he ran into a little trouble with the law. But he was apparently so indispensable, the RNC brought Broidy back as deputy finance chair in 2017 after he served as vice chair of the Trump Victory Committee in 2016.