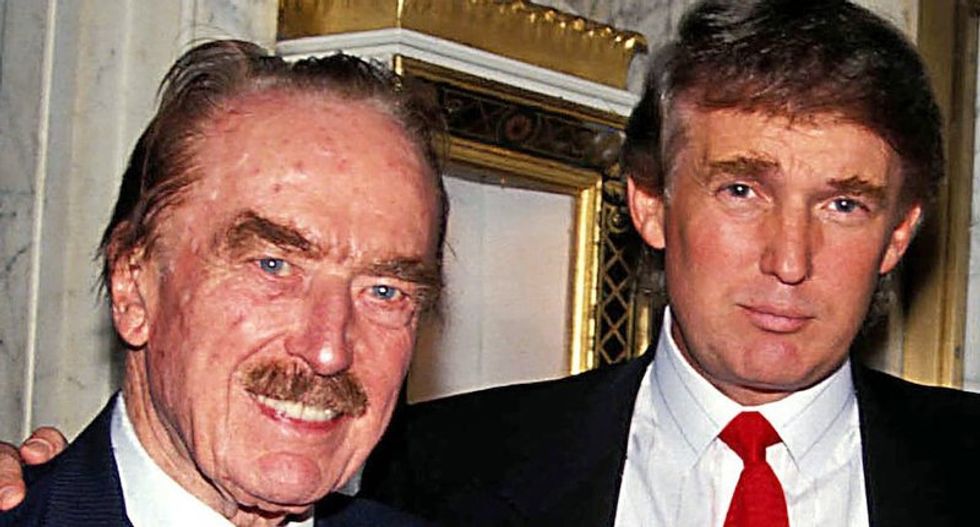 Donald Trump has continued attacking Rep. Elijah Cummings, who has represented the Baltimore area in Congress since 1996. Trump’s racist smears against the congressman and the district he represents appear to be related to the fact the House Oversight Committee, chaired by Rep. Cummings, approved subpoenas last week to investigate the use of personal emails, devices, and encrypted message-sharing apps for government business. Details on the House investigation from The New York Times:

“The committee has obtained direct evidence that multiple high-level White House officials have been violating the Presidential Records Act by using personal email accounts, text messaging services and even encrypted applications for official business — and not preserving those records in compliance with federal law,” said Representative Elijah E. Cummings, Democrat of Maryland and the chairman of the committee. “What we do not yet know is why these White House officials were attempting to conceal these communications.”

Those “high-level White House officials” include Jared Kushner and Ivanka Trump, and that’s what is likely sending Trump into a tizzy. Less than 48 hours after the committee approved the subpoenas, Donald Trump was parroting Fox News when he called Baltimore "a disgusting, rat and rodent-infested mess." The Republican Super PAC operating as a cable news network had just done a segment comparing conditions at border detention facilities to Rep. Cummings’ district.

It’s more than a little ironic that Donald Trump attacked Baltimore for impoverished conditions. Some of Donald Trump’s wealth (and the wealth of son-in-law Jared Kushner, too) came from owning and operating squalid housing in Maryland. In fact, the Maryland properties owned by the Trump Organization were so bad that Donald Trump’s own father was arrested in 1976 when he flew there to meet with local officials.

When the notoriously frugal Fred Trump failed to pay for repairs by that July, his housing license was revoked, preventing him from signing new leases. The blow to his pocketbook spurred him to action: Trump agreed to fly to Maryland to meet with local officials on Sept. 29, 1976.

Instead, he was arrested.

Prince George’s was cracking down on dilapidated housing complexes, but arresting an owner was unusual.

“We probably haven’t issued four arrest warrants in the past five years,” Joseph T. Healey, the county’s housing inspector supervisor, told The Post for an article about the arrest.

Fred Trump and the Trump Organization essentially stopped making repairs after white flight occurred to the suburbs and the complex became filled largely with black tenants. What does it say about the conditions of that property that Fred Trump was arrested? And by then, Donald Trump was the president of the Trump Organization. He would have been well aware of the situation in Maryland. Only three years before Fred Trump’s arrest in Maryland, the Department of Justice sued the Trumps for discrimination.

“Major Landlord Accused of Antiblack Bias in City,” the headline stated. The Department of Justice had brought suit in federal court in Brooklyn against Mr. Trump and his father, Fred C. Trump, charging them with violating the Fair Housing Act of 1968 in the operation of 39 buildings.

“The government contended that Trump Management had refused to rent or negotiate rentals ‘because of race and color,’ ” The Times reported. “It also charged that the company had required different rental terms and conditions because of race and that it had misrepresented to blacks that apartments were not available.”

Owning and operating dilapidated housing in Maryland, and Baltimore specifically, has also been very lucrative for Trump’s son-in-law, Jared Kushner. Jared and Ivanka Trump seem quite happy to live on the wealth generated from operating squalid housing. In 2017, Kushner-owned properties amassed more than 200 violations, according to Baltimore County Executive Kevin Kamenetz. The New York Times did an extensive expose about the Kushner-owned properties, and some of the conditions described by residents is the stuff of nightmares.

The worst troubles may have been those described in a 2013 court case involving Jasmine Cox’s unit at Cove Village. They began with the bedroom ceiling, which started leaking one day. Then maggots started coming out of the living-room carpet. Then raw sewage started flowing out of the kitchen sink. “It sounded like someone turned a pool upside down,” Cox told me. “I heard the water hitting the floor and I panicked. I got out of bed and the sink is black and gray, it’s pooling out of the sink and the house smells terrible.”

Other residents describe mold and mice infestations that made them and their children sick.

At Essex Park, east of the city, Marquita Parmely, the truck driver, told me she had a mouse infestation that was severe enough that her 12-year-old daughter recently found one in her bed. Parmely also has a 2-year-old with asthma, which is aggravated by allergens in mice droppings. She moved her own bed and other furniture away from the walls to dissuade mice, kept the family’s laundry in tote bags after mice started appearing in the hamper and vacuumed twice a day. Her neighbor told me it took weeks for staff members to replace a rear window that had been shot out by kids with a BB gun.

Although Jared Kushner has stepped down from his family company while he’s doing whatever it is he does in the White House, his shares of the company business are in a trust, which is said to be valued at $600 million. Yes, low-income and Section 8 housing have been very, very good to Kushner and Trump—both of whom are partially responsible for the poor conditions of Baltimore and Maryland housing over the years.