'Congress needs to wake up': Extinction rebellion activists superglue themselves to Capitol 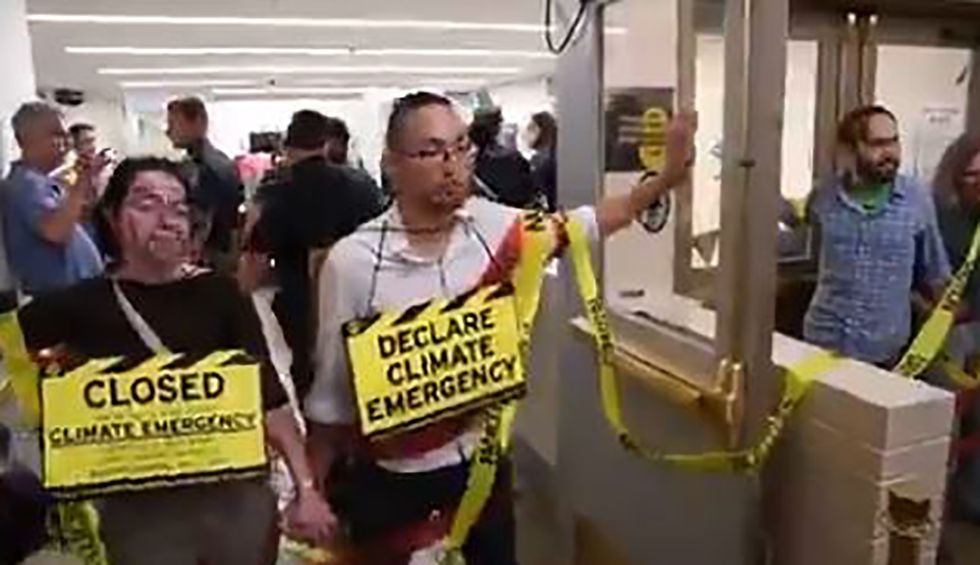 In an effort to disrupt business as usual in Congress and demand immediate climate action amid striking evidence that the crisis is here and now, activists with the global Extinction Rebellion movement superglued themselves to doorways in the halls of the U.S. Capitol Building Tuesday night urging lawmakers to declare a climate emergency.

Demonstrators chanted "We're out of time!" and "This is not a drill!" as members of Congress, reporters, and law enforcement officials struggled to maneuver around the human blockades.

One Extinction Rebellion campaigner said the goal of the civil disobedience—which led to 13 arrests—was to prevent lawmakers "from being able to go about their day as if this isn't a crisis."

Protesters with Extinction Rebellion are supergluing themselves to walls on the House side to demand Congress decla… https://t.co/dL2Yw3BXtq
— aída chávez (@aída chávez) 1563920203.0

"The U.S. Congress is not treating the climate emergency legislation with the urgency it deserves," the group said. "The existential threat that climate change poses to our economy and to the health of all Americans should make this resolution Congress' top priority. Extinction Rebellion activists are calling on both chambers to recognize the truth of the emergency we are in and to pass the resolution as a first step to acknowledging the severity of the crisis."

Sarah Soko, a 22-year-old activist who took part in Tuesday's demonstration, told The Guardian that passing the emergency resolution is "the simplest thing: it's just to recognize the science and to declare it an emergency and that we need to do something."

"I'm doing this today because the Congress is dragging their feet on declaring a climate emergency," said Soko. "So we're here to try and make this more urgent."