An American tragedy: Empires in decline tend to behave badly 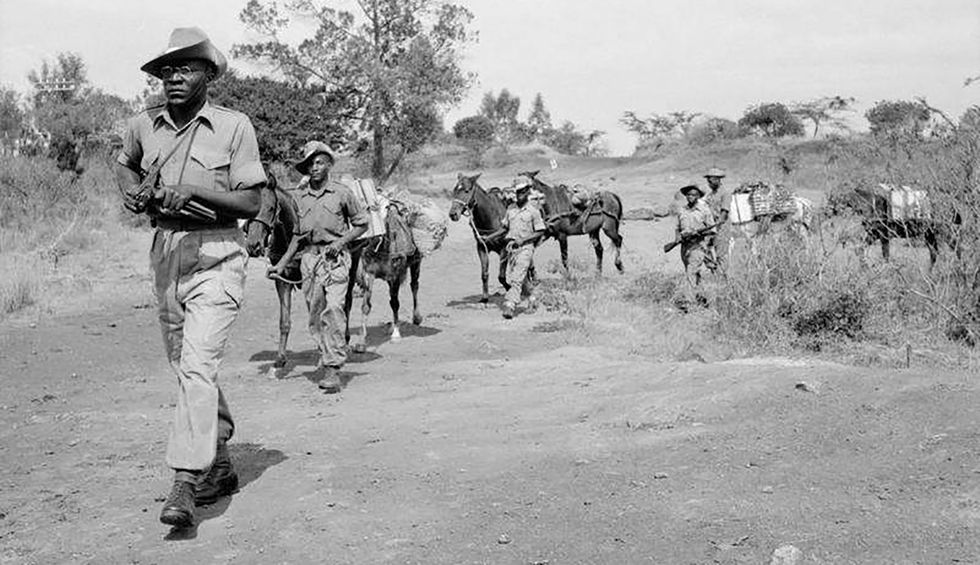 By Ministry of Defence POST-1945 OFFICIAL COLLECTION - This is photograph MAU 345 from the collections of the Imperial War Museums (collection no. 4905-03), Public Domain, https://commons.wikimedia.org/w/index.php?curid=31231129
Danny Sjursen
and
Truthdig
July 25, 2019

Empires in decline tend to behave badly. Indeed, whether British, French or Russian, the twilight years of imperialism often brought brutal repression of subjects abroad, the suppression of civil liberties at home and general varieties of brutality toward foreigners, be they refugees or migrants. The British built concentration camps and killed tens of thousands in Kenya during the 1950s Mau Mau rebellion. The French tortured and killed subjects in Algeria and nearly lost their own democracy in the process. The Russians slaughtered Afghans and then Chechens as the Soviet empire crumbled and transitioned to a truncated federation. As with these once-vast European empires, so it is with the United States in the 21st century.

The 18 or so years of war following the 9/11 attacks have seen this ostensible republic sink to new lows of behavior. Aggressive wars of choice have ushered in rampant torture, atrocities in Iraq’s Abu Ghraib prison, indefinite detention at Guantanamo Bay, extraordinary rendition, drone assassinations, warrantless wiretapping, mass surveillance of the citizenry, militarization of local police and now, migrant children in cages. As a child myself, educated in public schools that peddled the dangerous myth of American exceptionalism, I never imagined a day when my government would separate refugee children from their parents and then argue, straight-faced, in court, that the detained kids aren’t entitled to soap or toothbrushes. Yet here we are.

Too often, the debates surrounding immigration and border policy are artificially separated from U.S. foreign policy and American empire abroad. On this count, Democrats are as guilty as anyone. Uninterested—and often ill-informed—regarding foreign policy, most Dems lump immigration policy in with health care and the minimum wage as a purely domestic issue. But it’s not. Most current asylum-seeking migrants hail from Central American countries that have long been victims of coups, military interventions and the general meddling of the U.S. empire. In that sense, Uncle Sam helped create the travesties from which these many refugees now flee, and then, in a final insult, denies them asylum and detains them in substandard, prisonlike facilities.

It’s all connected. The empire—all empires—eventually come home. Small-town police decked out in camouflage fatigues, carrying assault rifles and riding around in armored vehicles; border patrol agents treating desperate migrants as enemies and posting racist comments in a secret Facebook group; the U.S. government unapologetically trying to imprison an authentic humanitarian simply because he gave water and food to those same migrants (who die by the thousands crossing America’s southern desert border ); and U.S. military intervention and bombing in countries from West Africa to Central Asia. These embarrassments, these tragedies, are nothing less than the standard outgrowth of venal imperialism. In that sense, America in 2019 has more in common with those British, French, Russian and other empires of the last century than most citizens are willing to admit.

Aggressive wars abroad pollute the domestic political discourse and breed hypernationalism, racism and xenophobia. The military men who once carried water for the empire all too often return home and seek out jobs in law enforcement or the border patrol. They then apply the skills they honed patrolling foreign streets, guarding foreign prisoners and killing foreign adversaries to new victims—usually immigrants and/or urban people of color—back home in the US of A. It is a vicious cycle of cruelty in which even the perpetrators become victims, their souls tarnished and damaged irreparably by the application of violence and cruelty to brown faces, both at home and abroad.

A few weeks back, the American citizenry was treated to two nights of debate by 20 Democratic Party presidential primary candidates. I sort of like a few of them (Liz, Bernie, Tulsi), but none demonstrated the confidence and candor to relate imperial war abroad to oppression and inhumanity at home. Aggressive policing, mass incarceration, inhumane migrant detention facilities and the war on the press in general and whistleblowers specifically—these are all products of overseas empire, imperial chickens come home to roost. A true opposition party, an authentic progressive movement, must recognize this, identify it, publicize it and offer a holistic alternative to American foreign policy as usual.

It may already be too late, of course, but I cling to a desperate sort of hope. Sure, both Dems (Obama) and Republicans (Bush II, Trump) have offered one foreign policy emperor after another for the presidency. And sure, the people’s supposed representatives in Congress have shirked their duties and let those emperors run wild. Nonetheless, the absurd and unhinged Trump administration might just (let’s hope) provide the opportunity for a mass citizens movement in opposition to empire at home and abroad. Just recently, after all, Americans were informed that some two-thirds of military veterans now think the Iraq and Afghan wars weren’t worth fighting. When even martially inclined, traditionally conservative former soldiers turn on the empire, the stage might just be set for a revolt to save this republic. At least, one can dream.