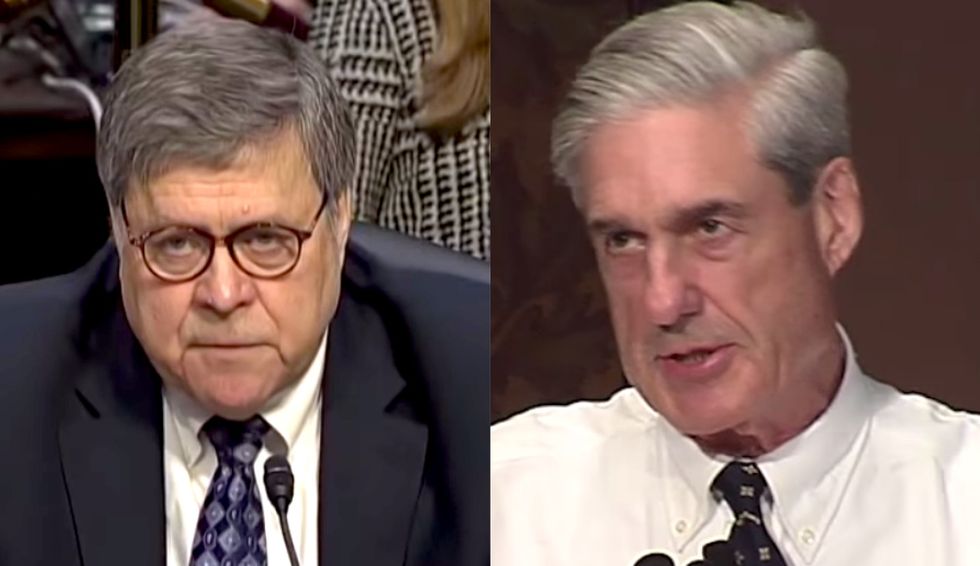 Attorney General William Barr on Monday accused House Democrats of attempting to create a "public spectacle" by subpoenaing Robert Mueller, the former special counsel, to testify before Congress about his investigation into Russian meddling in the 2016 election.

"I'm not sure what purpose is served by dragging him up there and trying to grill him," the attorney general told the outlet "I don't think Mueller should be treated that way or subject himself to that, if he doesn't want to."

Mueller has been caught in the center of a feud between the White House and Democrats in Congress, who want to hear from him about his nearly two-year investigation into Russia's election interference, alleged ties between the Trump campaign and Moscow and whether the president obstructed justice.

Although Mueller no longer works for Justice, the department could seek to limit his testimony about decisions he made as special counsel.

Mueller concluded there was no conspiracy on behalf of the Trump campaign to coordinate with Russia to influence the outcome of the election. He did not reach a conclusion on whether the president had attempted to obstruct justice, although he did not exonerate him. Mueller pointedly said he would have exonerated Trump if he could have. He also cited Justice Department guidelines that prevent a sitting executive from being indicted.

Barr and then-Deputy Attorney General Rod Rosenstein reviewed the evidence laid out by Mueller examining obstruction and determined it was insufficient to accuse Trump of criminal wrongdoing. Trump has praised their conclusions, as well as the lack of conspiracy resulting from the investigation, which he called "complete and total exoneration."

Democrats believe Barr inappropriately claimed the president did not committed obstruction of justice, despite evidence laid out by Mueller in his report. Some prosecutors who worked for the special counsel also claimed the attorney general did not adequately represent their findings, telling associates the report was more damning for Trump than Barr had indicated.

Rep. Adam Schiff, D-Calif., chairman of the House intelligence committee, tweeted Monday that Barr's remarks to the AP were "no surprise."

"Barr misled the public about Mueller’s report, and wants his own deception to stand," Schiff wrote. "The public has a right to hear the truth, from Mueller himself, about Trump's misconduct and ongoing national security risks."

Barr has embraced Trump's political agenda, absolved the president of possible jeopardy and launched an investigation to examine the origins of the probe, which Trump and his Republican allies in Congress have argued is necessary.

The attorney general told the AP that the counterintelligence investigation is underway and noted that he believes it is "essential to take a deeper look at how things unfolded." The news outlet noted that Barr said "he has not received a satisfactory answer about why a counterintelligence investigation was opened on the Trump campaign or whether there would've been a less drastic measure that could've been taken at the time."

Barr refused to tell the AP how he thought Mueller handled the Russia investigation, although he described his relationship with the former special counsel, who has been his friend for three decades, as "fine."

Mueller will appear before lawmakers in both public and private sessions next week after House Democrats issued a subpoena for his appearance. His testimony is poised to be one of the most high-stakes congressional hearing in years and represents a huge moment for House Democrats, who have wrestled with whether to launch an impeachment inquiry against Trump following Mueller's investigation and the White House's stonewalling of congressional probes.

The testimony will also mark Mueller's first public appearance related to his investigation since delivering his 10-minute statement on May 29, during which he detailed his findings and explained his decision not to reach a conclusion on whether Trump obstructed justice, despite reporting at least ten instances of possible obstruction by Trump in his report.

Mueller, at the time, declined to take questions from reporters and made clear that his testimony would not go beyond what was written in his 448-page report.

"Beyond what I've said here today and what is contained in our written work, I do not believe it is appropriate for me to speak further about the investigation or to comment on the actions of the Justice Department before Congress," he said. "The work speaks for itself. The report is my testimony."

Still, Democrats have argued that the American people deserve to hear directly from Mueller, and lawmakers across the aisle have said they want to question the former special counsel about some of the decisions he made during the investigation.

Republicans, meanwhile, are likely to grill Mueller about his conclusions, as well as their concerns that senior FBI officials were biased against Trump and to argue that the origins of his probe were illegitimate and politically motivated.

"I hope the special counsel's testimony marks an end to the political gamesmanship that Judiciary Democrats have pursued at great cost to taxpayers," Rep. Doug Collins of Georgia, the top Republican on the Judiciary Committee, said in a statement following the news that Mueller would appear before Congress. "May this testimony bring to House Democrats the closure that the rest of America has enjoyed for months, and may it enable them to return to the business of legislating."
Report typos and corrections to: feedback@alternet.org.
#story_page_post_article