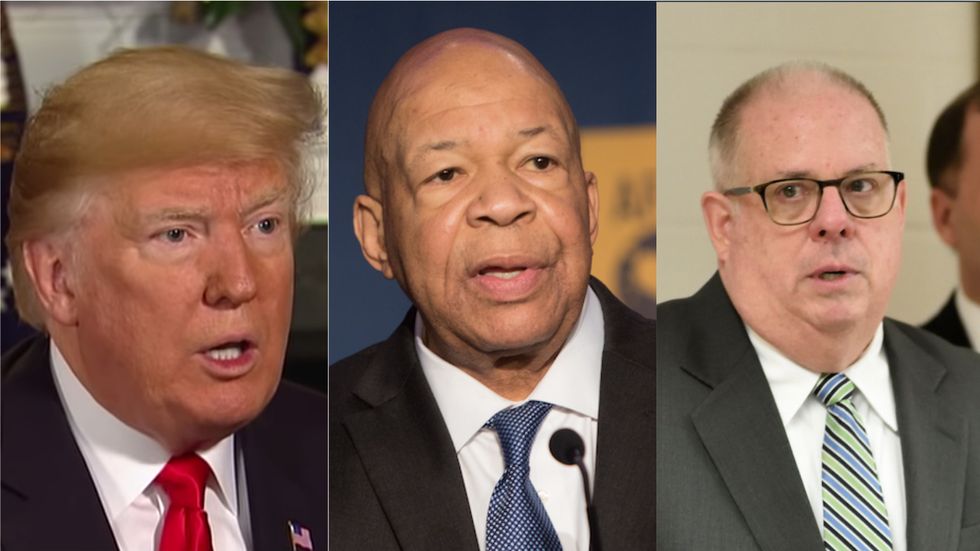 Most leading Republicans appear content to ignore President Donald Trump's venomous and racist weekend attacks on Rep. Elijah Cummings (D-MD), which disparaged the lawmaker's hometown of Baltimore as "infested" and a place no "human being would want to live." While avoiding defending the president, for example, Sen. Rick Scott (R-FL) simply echoed the attacks on Cummings.

But in a new statement to WBAL News Radio, Maryland's Republican Gov. Larry Hogan — chair of the National Governors Association who had been rumored to be considering challenging Trump in the 2020 GOP primary — denounced Trump's attacks as "outrageous and inappropriate."

"We get this tweet that sets off this angry firestorm of angry tweets back and forth," he said, "The president attacking Elijah Cummings and Baltimore and this district, and other people are going to fire back. And it's like: I think enough is enough. I mean, people are just fed up with this kind of nonsense. And why are we not focused on solving the problems and getting to work? Instead of who's tweeting what, and who's calling who what kind of names. I mean, it's just absurd."

While it was commendable for Hogan to denounce the president's comments, he seemed to avoid direct criticism of the president, instead calling out the tweets themselves and the subsequent furor. While he said that the White House should be doing more to help his state, he also blamed Congress for neglecting its problems. And some of the comments above even seemed to criticize those who called out the president's obvious racism. He made clear that he opposes "angry and divisive politics" — but he couldn't bring himself to admit or say that Trump himself trafficks almost exclusively in this kind of rhetoric. Instead, his remarks gave the impression that he thinks both sides are to blame. Surely, no party or politician is innocent of stoking divisiveness, but failing to grapple with the unique role Donald Trump has in actively enflaming racism, bigotry, and prejudice in the United States shows either naivete or cowardice.

Watch the clip of Hogan's comments below: