'This is what the climate crisis looks like': One day after crushing heat, flash floods inundate New York City 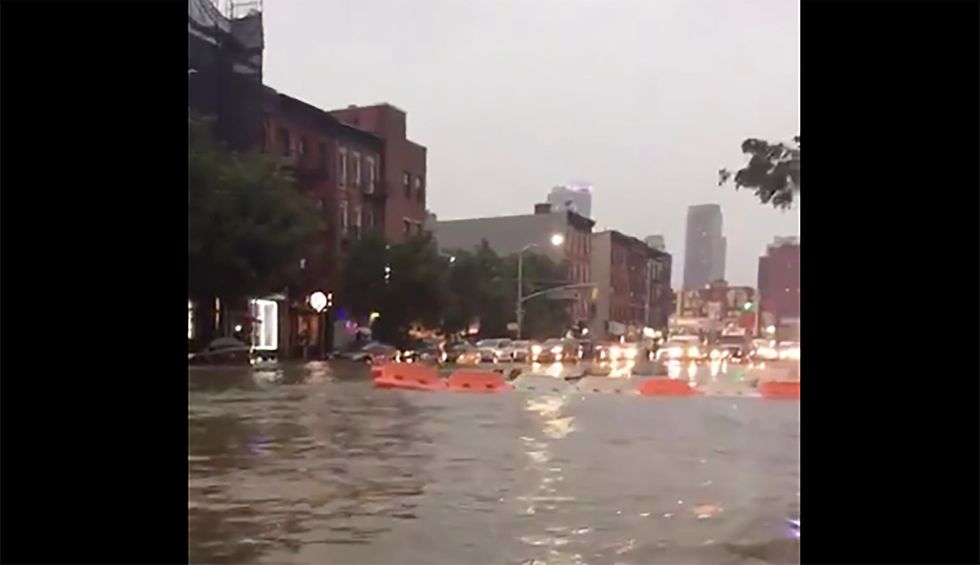 Less than a month after New York City declared a climate emergency, the reality of the crisis came crashing home Monday as streets across Brooklyn and Queens were inundated with flash flooding a day after power went down in three boroughs due to a heat wave.

Commuters headed home late in the day were stymied by trains shut down due to flash flooding from rain that hit the city after a days-long heat wave that drove temperatures into the triple digits.

"This is what the climate crisis looks like," tweeted youth-led environmental movement Sunrise Movement.

After days of a deadly heatwave, New York is now facing historic flooding. This is what the climate crisis looks l… https://t.co/25rkoSnsKr
— Sunrise Movement 🌅 (@Sunrise Movement 🌅) 1563852616.0

On Monday evening, a rain storm that hit the area at 8pm caused flash flooding. Streets in Brooklyn were impassable as water rose to people's waists, leading at least one Uber driver, Walid Shawon, and his customer in Brooklyn's South Slope neighborhood to flee the vehicle from a window and swim to safety.

"My car was floating in the water,"  Shawon told The New York Daily News. "We put it in neutral and it floated like a boat."

As Twitter user @brahmsposting noted, the water that Shawon and his fare forded comes from the Superfund site Gowanus Canal, making the flooding potentially toxic.

"The water isn't even safe to touch without special gear," tweeted @brahmsposting.

As a number of commentators pointed out on social media, the flooding punctuated the growing threat of the climate crisis and how it will affect the world's most populous cities.

The flooding and heat wave, tweeted City Council Speaker Corey Johnson, makes clear that the "bottom line" for New Yorkers is to do what needs to be done to prepare for the effects of the crisis.

"We must do all we can to get our infrastructure ready," Johnson said. "Every night like this we need to recommit ourselves to the global fight against climate change."

But, as climate advocacy organization 350.org pointed out, not everyone is on board with that plan.

"It's worth noting that as New York City's roads, subways, and other vital infrastructure struggle to deal with climate impacts, @NYGovCuomo is weighing whether to build a new, climate-wrecking fracked gas pipeline in the city's harbor," the group tweeted.