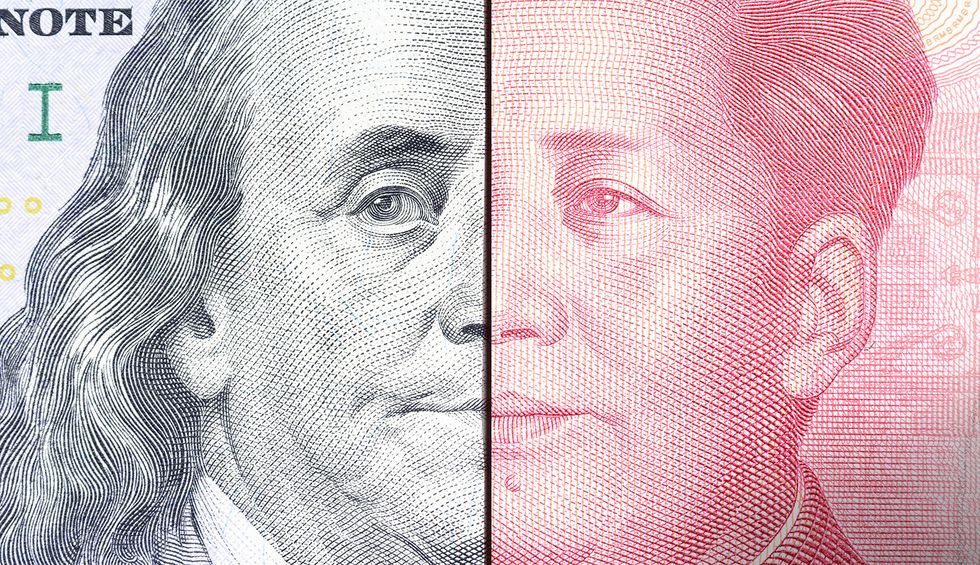 The United States is number one: First to secure independence from a colonial overlord, it boasts the freest speech, the best junk food, and the largest economy. And, frankly, its citizens like it that way. Being free and number one defines Americans.

That standing, however, is at risk.

China is ascendant. Deliberately and strategically, China is moving toward becoming the world’s largest economy. It would be one thing if that occurred naturally. But key to China’s rise is fraud, including violation of international laws, norms and standards.

That’s what President Donald Trump confronts when he meets with Chinese President Xi Jinping Saturday in Japan at the annual Group of 20 summit. The Trump administration has imposed tariffs and sought to curb China’s rogue practices. U.S. trade negotiators have stood strong in the face of withering criticism. And that’s exactly right. America needs a tough, enforceable agreement, or China is going to own America. And being owned is not being free.

America needs steel for strength—for a hardy economy, for a robust military. Tens of thousands of skilled U.S. workers earn family-supporting wages mining iron ore and forging and finishing steel. High-grade steel and aluminum are essential to the U.S. military for planes, ships and munitions and for infrastructure like roads, bridges and pipelines that are vital to both military movement and vigorous commerce.

The United States could make its aircraft carriers and stealth fighters with imported steel and aluminum. It could depend on China, the largest producer of both aluminum and steel in the world by far. And it could get the metals from China on the cheap.

The Chinese government owns some steel mills and aluminum smelters and subsidizes others by providing free or cut-rate raw materials, or loans that don’t have to be repaid, or underpriced utilities, or all of the above. So Chinese companies can beat any price anywhere.

The Chinese government also assists its steel and aluminum industries in more subversive ways. For example, it stole trade secrets by directing its military to hack into the computers of U.S. companies, including U.S. Steel, Allegheny Technologies and Alcoa.

China permits pollution, slave wages and perilous working conditions to keep costs low. It manipulates its currency value to reduce the price of its exports.

And it massively overproduces. In 2000, Chinese companies forged 15 percent of the world’s steel. Last year, that number was 51 percent.

And that is too much steel.

China dumps its excess on the world market at dirt-cheap prices that its mills can afford because of the government subsidies and other market interference. The result is bankrupted steel companies in other countries worldwide, making everyone increasingly dependent on China.

China pledged not to do this when it gained entrance into the World Trade Organization (WTO). Over the past decade, it has repeatedly told its trading partners that it would end illegal subsidies and reduce production.

Those promises were nothing but bull. China did close old mills. But then it opened new ones. It set production records last year and again in the first quarter of this year.

That is why President Trump last year imposed tariffs on imported steel and aluminum. The intent was to give the American industries room to recover. And they did. Production ramped up. Smelters and blast furnaces reopened. Thousands of workers got their jobs back.

But then, just last week, U.S. Steel announced it would idle three blast furnaces, two in the United States and one in Europe. It specifically blamed the closure in Europe on excessive imports there.

That is not a good sign for American steelmaking independence.

It’s not just steel. The administration has placed tariffs on $250 billion worth of all sorts of imports from China. It wants China’s theft of trade secrets to stop. It wants an end to forced transfer of intellectual property from U.S. companies trying to set up shop in China. It wants China to abide by the free market principles—including ending government ownership and subsidies—that it agreed to when it entered the WTO.

And it’s not just tariffs. The Trump administration has taken other steps to stop what it sees as threats by China to both U.S. commerce and sovereignty.

The United States, for example, had Canada arrest Chinese telecommunications giant Huawei Technologies’ chief financial officer, Meng Wanzhou, on allegations that the company violated U.S. sanctions against Iran and stole technology from T-Mobile. The United States regards Huawei as a national security threat and has forbidden U.S. firms to sell components to Huawei that it needs to produce smartphones and servers.

The United States has asked European nations not to contract with Huawei to establish their 5G phone networks for fear China will use the equipment for espionage or sabotage. But the Chinese government-subsidized price Huawei offers, sometimes 60 percent lower than competitors’, is irresistible to some.

This is not just U.S. paranoia. The United Kingdom’s Royal United Services Institute, a defense and security think tank, said it would be irresponsible to allow Huawei access to the country’s telecommunications system.

The situation is similar with trains. Both Democratic and Republican members of Congress are backing legislation to forbid U.S. taxpayer money to be used to buy rail systems or buses from Chinese government-owned, subsidized and operated companies. Not only are U.S. jobs lost when these Chinese firms build railcars and buses for U.S. transit systems, but the foreign firms gain access to the systems’ technology.

The United States just conducted a cyber-attack on an Iranian militia in retaliation for the country’s downing of a U.S. drone. It knows the possibilities.

Before leaving for Japan, President Trump threatened to impose another $300 billion in tariffs. That’s exactly the right posture toward China, which made agreements in earlier trade negotiations, then reneged on them in May.

China is a country that mowed down its own citizens in Tiananmen Square, that just gave its president permission to be an autocrat for life, that surveils millions of its citizens, that established a government commission that can secretly seize officials and hold them for six months without fair trial, and that is cruelly detaining in “re-education” camps its minority Turkic Muslims, including Uyghurs and Kazakhs.

Americans do not want to be dependent on that country. They don’t want to be owned by China.