'Where is Congress?': Anti-war voices sound out as Trump claims power to bomb Iran on a whim 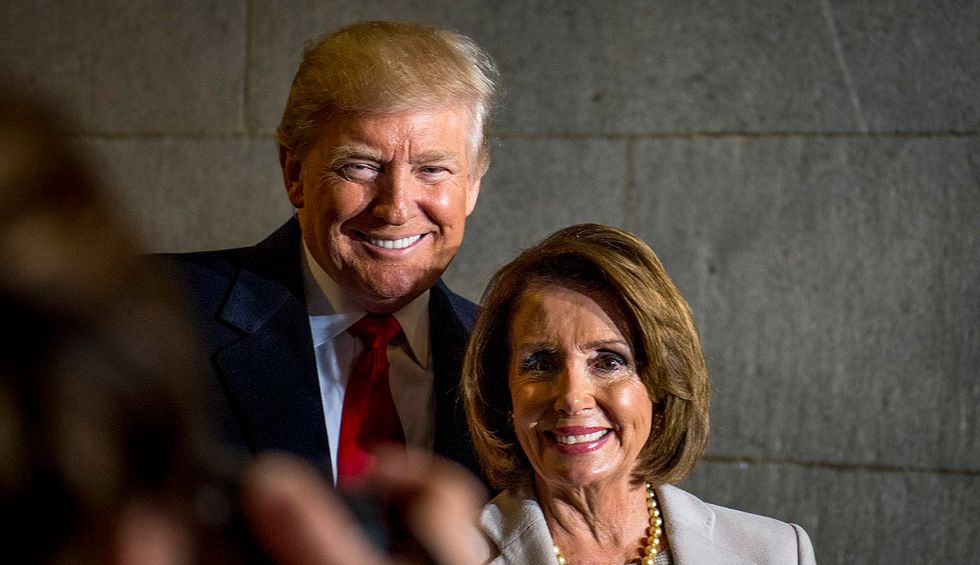 President-elect Donald J. Trump and U.S. Speaker of the House Nancy Pelosi smile for a photo during the 58th Presidential Inauguration in Washington, D.C., Jan. 20, 2017. More than 5,000 military members from across all branches of the armed forces of the United States, including reserve and National Guard components, provided ceremonial support and Defense Support of Civil Authorities during the inaugural period. (DoD photo by U.S. Air Force Staff Sgt. Marianique Santos)
Jon Queally
and
Common Dreams
June 21, 2019

In the wake of an aborted bombing raid against Iran called off by President Donald Trump just minutes before it was set to launch overnight, anti-war progressives and progressive Democrats on Friday are demanding an end to the era in which the nation's commander-in-chief is allowed to casually or whimsically claim the authority to start a war or launch an unnecessary attack on a foreign country—a legacy created by nearly two decades of unchecked power, the rise of the imperial presidency, repeated misadventures, and endless war.

According to the office of House Speaker Nancy Pelosi, the most powerful Democrat in Congress, the White House did not even inform her of the plan to launch the attack despite a meeting with the president and top staffers just hours earlier.

In a clip of an interview with NBC's "Meet the Press" released on Friday, Trump explained that while the warplanes were "about ready to go" but not yet in the air, it was nearly the point of no return when he finally decided to issue the stand down order. Watch:

EXCLUSIVE: In an exclusive interview with Chuck Todd, President Donald Trump says he hadn’t given final approval to… https://t.co/OLlulUnaZz
— Meet the Press (@Meet the Press)1561135825.0

In response to Trump's behavior, progressive Democrats running for president were among those denouncing the fact that he had come within just minutes of ordering a strike that would have sparked untold death and damage.

"A war with Iran would be a disaster and lead to endless conflict in the region," said Sen. Bernie Sanders (I-Vt.), a 2020 Democratic presidential candidate, on Friday morning. "Congress must assert its constitutional authority and stop Trump from going to war."

Sen. Elizabeth Warren (D-Mass.), also running for president, tweeted: "Donald Trump promised to bring our troops home. Instead he has pulled out of a deal that was working and instigated another unnecessary conflict. There is no justification for further escalating this crisis—we need to step back from the brink of war."

Groups outspoken in their opposition to war with Iran, including CodePink and Win Without War, issued alarm over just how close Trump admits he was to giving the final order to pull the trigger:

After Iran shot down a US spy drone yesterday, Trump ordered a limited a military strike, only to pull back last mi… https://t.co/CXKBaEZDlY
— CODEPINK (@CODEPINK)1561125663.0

Trump's going back & forth on whether to take military action in reaction to Iran shooting a US drone yesterday. Th… https://t.co/Vhi8cWllDb
— Win Without War (@Win Without War)1561135982.0

In a tweet issued after news broke of Trump's aborted attack, progressive journalist John Nichols—who has written critically and extensively on the rise of unchecked executive power during the tenures of George H. Bush and Barack Obama, and Trump—emphasized how the current president, like his predecessors, has no constitutional authority to wage war or launch offensive attacks without the explicit consent of Congress:

"Where is the Congress?" Nichols asked. "Decisions about war and peace should not be left to the whims of a president who is ill-prepared, ill-informed, and ill-advised."

In an email to its members on Friday, the progressive advocacy group Justice Democrats—which has organized to elect anti-war candidates over more hawkish members of the party—said that even though Trump called off the strike at the last minute, the overnight episode "highlights a disturbing reality that we must face—this could happen at any time."

And the threat of war continues, the group warned. "Without the light and power of public pressure," the email continued, "Trump's administration could wield the most powerful military in the world to suit their own political purposes. That's not just scary. It's disturbing on a fundamental level. The notion that unconfirmed executive officials and members of an administration that the majority of Americans did not vote for could condemn us to yet another multi-decade bloody conflict displays a structural problem in our foreign policy, and a structural problem in Trump's ability to wage unchecked war."

Prior to Thursday night's developments, Rep. Barbara Lee (D-Calif.), the only member of Congress to vote against the original Authorization for Use of Military Force (AUMF) following the attacks of September 11, 2001, wrote: "As Trump and [Secretary of State Mike] Pompeo continue to provoke war with Iran, it's more important than ever that Congress take back its authority on war and peace. We cannot continue to give the Executive Branch a blank check for endless war."

But as demonstrated by Brian Hook, U.S. Special Representative for Iran, during questioning by Rep. Ted Lieu (D-Calif.) in a House committee hearing on Thursday, the administration refuses to even acknowledge that it is Congress, not the president, who has the power to declare war under the U.S. Constitution:

In a Friday tweet, Win Without War warned that the Trump administration "is dangerously marching us toward a disastrous war with Iran right now," and called on people to contact their members of Congress "right now to stop Trump from launching an unauthorized war with Iran."

An online petition being circulated by the group states, "Call Congress: No War with Iran!":

Appearing on MSNBC's "Morning Joe" on Friday morning, Rep. Lee said the world is now at a "very dangerous moment" and was adamant that there is nothing in the 2001 AUMF—despite reported claims by Pompeo to the contrary—that would allow it to be used for strikes against Iran.

We can’t let Bolton and Pompeo drag us into war with Iran. We must deescalate and work with our allies to ease tens… https://t.co/s7qzwcPreP
— Rep. Barbara Lee (@Rep. Barbara Lee)1561129440.0

But even as some lawmakers in Congress seek to reclaim their "authority" to wage war or help broker peace, outside anti-war voices argued that there are deeper issues at play beyond government process.

"Now is the time for unambiguous moral opposition to war with Iran," wrote anti-war activist and In These Timesjournalist Sarah Lazare, "not handwringing about whether Trump is following the right procedure for waging war."

And Will Menaker, co-host of the Chapo Trap House podcast—responding to the chorus of Democratic lawmakers who talk as if the only problem with going to war with Iran is that it is being done without the blessing of Congress—asked this question: "Why is it so hard for any Democrat to just say 'War with Iran is wrong, and we oppose it unequivocally'?"

Not content to leave the argument to Congress—a body that has proved deeply unwilling to curb the U.S. war machine—CodePink was spearheading a weekend demonstration against the ongoing threat of a U.S. attack on Iran.

The Justice Democrats put it this way: "Peace begins with us."

"International peace cannot be left up to chance," they said in their email. "Congress needs to do everything it can to regain its constitutional power to declare war, and end the era where the President of the United States can plunge our nation into catastrophic conflicts."