What the philosopher Aquinas teaches us about political disagreements 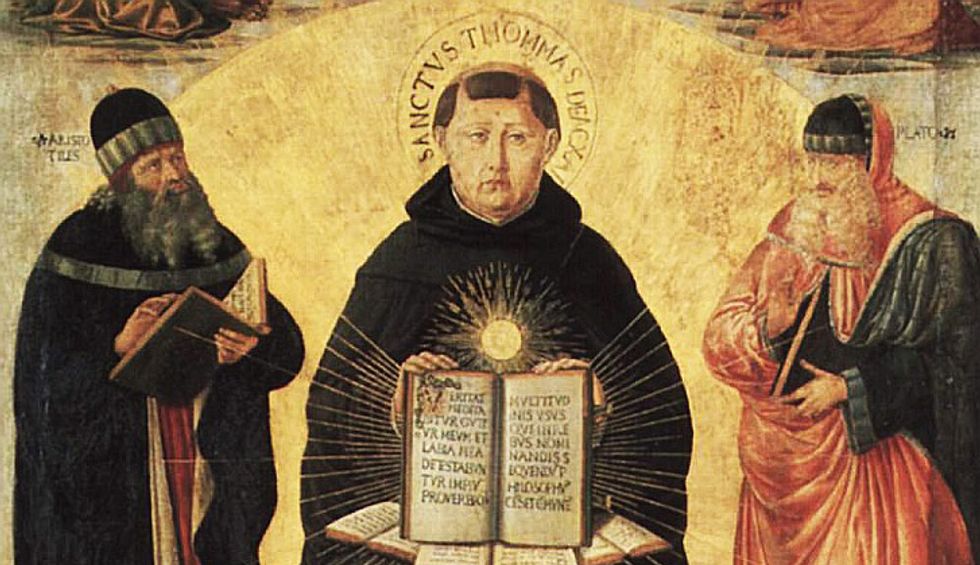 This diary is part of my series Philosophy Matters, which examines the ideas of some important philosophers and their relevance to politics. You can find the other parts by searching the #PhilosophyMatters hashtag on DK.

Aquinas was a hugely influential and (for his time) progressive thinker. (“Aquinas” isn’t his surname, but it’s common in academia to call him simply “Aquinas.”) When the Roman Empire fell, Christians in Western Europe lost the ancient Greek philosopher Aristotle’s writings. In the 13th century, Western European Christians rediscovered many of Aristotle’s works through contact with Muslim scholars. At the time, Aquinas was teaching at the University of Paris. He thought Aristotle was a pretty cool guy and showed his more cautious brethren that it was possible to embrace the new ideas instead of fearing them.

Aquinas has a political philosophy, but here I'd like to focus on a different part of his thought: his explanation of evildoing.

Why do people do evil?

One of Aquinas’s goals is to understand why people do evil. This question is especially puzzling for Aquinas. Like Aristotle, he thinks that the ultimate goal of all our actions is to have a good life (and, for Christians like Aquinas, bliss in the hereafter). Moreover, Aquinas and Aristotle think that we can have a genuinely good life—good for us, not just “morally” good—only if we live a life of virtue and excellence. According to one interpretation, which I share, Aristotle and Aquinas think that a fulfilling life just is a life of intellectual and moral excellence. In that case, why do people do evil? Don’t they know they’re just hurting themselves?

Aquinas identifies three ways we can do evil despite wanting a good life for ourselves: we can sin from ignorance, from passion, or from what Aquinas calls malitia. In all three cases, we’re still seeking what’s best for us, but we are temporarily confused about what is in fact best for us.

You can sin from ignorance in two ways:

As you can guess, Aquinas views this kind of sin as the least serious.

But at the moment when you act, intense emotions or sensations have biased your thinking so that you momentarily fail to notice that your particular action is of that kind. For example, Aquinas thinks that one can know that cheating on one’s spouse is a bad idea and yet be so overcome with lust that one momentarily fails to consider that having sex with this person would be cheating. (Aquinas’s phrasing makes it sound as if this failure to consider lasts through the entire act, but I doubt that anyone has an affair without ever recognizing that they’re cheating.)

Malitia simply means “badness.” It’s often translated as “malice,” but the English word “malice” implies a cruelty that malitia doesn’t. For Aquinas, sinning from malitia means sinning because you have misjudged which of two evils is lesser. When you sin from malitia, you aren’t ignorant that your action is bad, nor are you experiencing violent emotions, but you still incorrectly perceive the situation: you think that the evil you’re committing is worth it when it really isn’t. This incorrect perception could result from any of the many subtle factors that shape your thinking: your preconceived ideas, your mood, your habits, the condition of your body, etc.

Why does it matter?

Many times, not least in the realm of politics, people do things that don’t make sense to us.

“Why would they do that?”

“Why do they vote that way?”

“Don’t they realize they’re acting against their own interests?”

“Why won’t they support my candidate?”

“Why aren’t they more moderate/liberal/conservative/whatever?”

“Why are they being purity testers?”

“Why are they squelching disagreement?”

Aquinas tells us that people do evil because, at the moment when they act, they are confused about what’s good for them. Maybe you disagree with this theory. But whether you agree with him or not, his analysis of sinning helps remind us that most people aren’t trying to be evil. They may be ignorant, misled by passion, or simply bad at judging which evil is lesser, but ultimately they’re just doing what they perceive to be best for them.

This applies even to internet trolls. They're annoying, but they're annoying because they think that pissing people off is fun. Aquinas would say that they're seeking a fulfilling life just like everyone else but they don't understand what's truly fulfilling.

Aquinas also reminds us that many factors—our mood, our health, what we just ate—can affect our reasoning. Even when we think that we’re just thinking, all sorts of other processes are happening that color our perception of things. Recognizing that unconscious biases constantly affect our thinking can help us maintain a healthy humility.