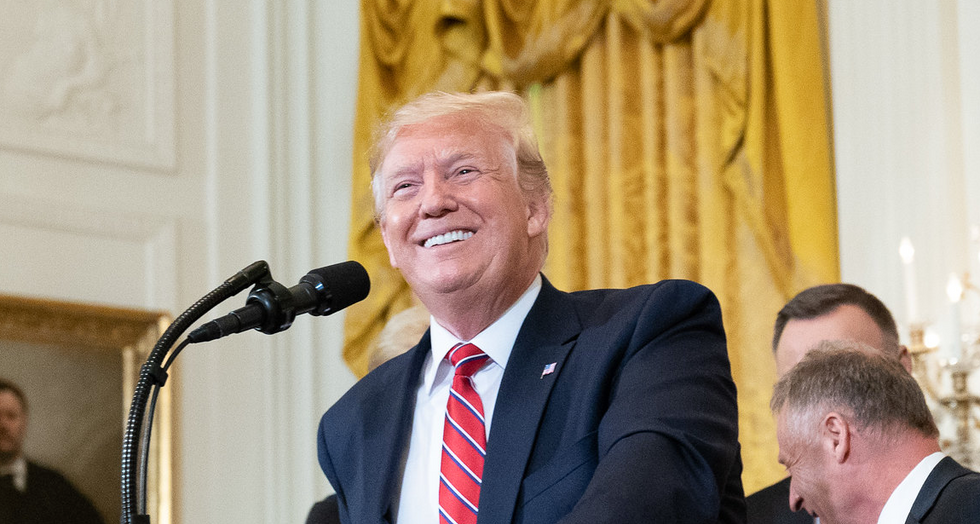 June 14, 2019 marks the 73rd birthday of President Donald Trump. Born in Queens in 1946, the Republican president and former Democrat is among the older members of the Baby Boom Generation; had he been born a year earlier, Trump would — like Sen. Bernie Sanders, House Speaker Nancy Pelosi or Vice President Joe Biden — be considered a member of the Silent Generation. But despite the fact that Trump just turned 73 and won’t be mistaken for a Millennial anytime soon, he hasn’t been the least bit shy about using ageism to attack Biden. And in the months ahead, Trump will likely step up his “Sleepy Joe” line of attack.

As silly and childish as Trump’s name calling can be, there is a method to his madness. Trump is no intellectual genius, and self-control isn’t one of his strong points either. But he has enough street smarts and political savvy to realize that defining a political opponent can be a formidable weapon — and in Biden’s case, he is hoping that voters in the 2020 presidential election will also view the 76-year-old Democrat from Scranton, Pennsylvania as “Sleepy Joe.”

By repeatedly describing Biden as “Sleepy Joe,” Trump is claiming that Biden is much too lethargic and over-the-hill to become president. Whether or not Biden can convince voters that Biden really is “Sleepy Joe” remains to be seen, but Trump is no doubt thinking that the more often he repeats the Biden-is-too-old claim, the more likely voters are to buy into it — and those voters include Democratic primary voters as well as voters in the 2020 general election.

So far, polls have shown the centrist Biden to be the Democratic presidential candidate who is the most likely to win his party’s nomination. But that could change. If Biden, as many pundits have asserted, really is the Democratic candidate Trump fears the most, it is in his best interests to define him as “Sleepy Joe” and convince Democratic primary voters that they would be better off with someone else.

The “Sleepy Joe” image of Biden that Trump is promoting is the polar opposite of comedian Jason Sudeikis’ goofy caricature of him on “Saturday Night Live” during the Barack Obama years. Sudeikis portrayed Biden as being too hyper and energetic for his own good. And if Sudeikis revives his wacky Biden portrayal a lot this year on “SNL,” it would probably be beneficial for the former vice president and help counter the “Sleepy Joe” caricature of Biden that Trump wants voters to buy into.

It’s ironic that a 73-year-old Baby Boomer would use ageism to try to diminish a political opponent, but then, Trump’s audacity is one of the reasons why, in 2016, he managed to defeat a long list of Republican candidates in the GOP presidential primary as well as Democratic nominee Hillary Clinton in the general election. Trump’s arrogance, in the minds of his hardcore supporters, isn’t a liability; it’s an asset.

While Trump repeatedly denounces Biden as “Sleepy Joe,” he has a name for Sanders as well: “Crazy Bernie.” Trump is obviously trying to convince voters that Sanders is a far-left extremist even though — truth be told — he is really a New Deal/Great Society liberal and a disciple of President Franklin Delano Roosevelt and President Lyndon B. Johnson, not Che Guevara or Mao Tse Tung. Sanders’ positions on Social Security, Medicare, universal health care and a long list of other issues are quite mainstream.

But Trump realizes that perception can become reality in the minds of voters. And if Democratic primary voters buy into the claim that Biden is too lethargic to become president and Sanders receives the nomination, Trump is hoping that voters in the general election will be convinced that Sanders is far from the mainstream. Possibly, Trump would try to use ageism against the 77-year-old Sanders — who is a year older than Biden — but that would be difficult in light of the fact that the Vermont senator is so popular among Millennial Democrats. Sanders clearly resonates with millions of liberal/progressive voters who are 45 or 50 years younger than him.

To Trump, using names like “Sleepy Joe” and “Crazy Bernie” is more than name-calling: it’s part of a coherent political strategy. And even though Trump is now 73, he won’t hesitate to keep using ageism to attack Biden as the 2020 presidential election moves along.