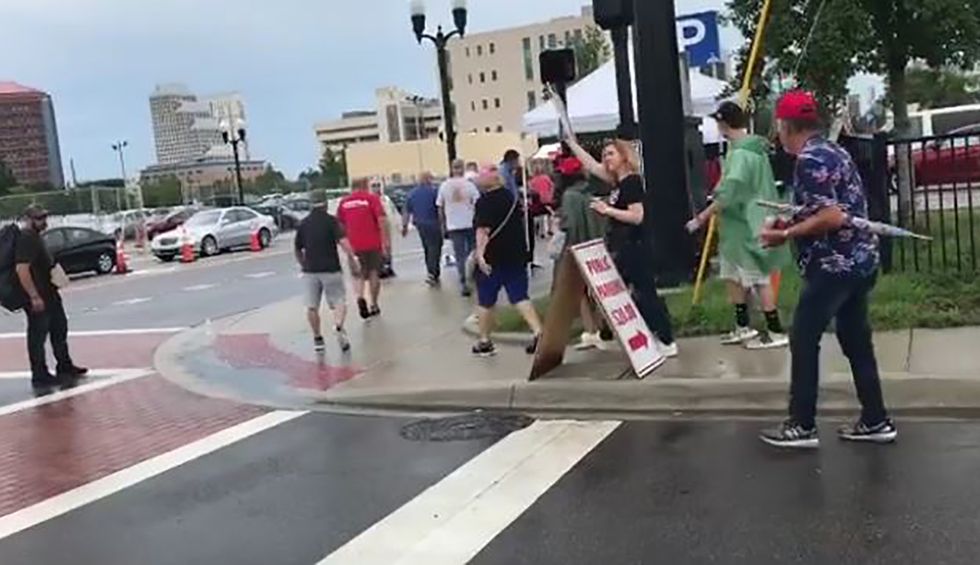 I refused to go anywhere near Trump’s re-election kickoff last week, although it’s very close to where I live. My friends who did go saw some very disturbing, albeit unsurprising, behavior from Trump supporters. Media reps were threatened by a few unhinged supporters after Trump led the chant for “CNN Sucks” and “Fake News,” which I found ironic since posing as fake CNN reporters has become a thing now with these tools (1:30 mark in the video).

There were the obligatory white supremacists and hate groups, of course, who acted every bit as belligerent as expected. They threatened people and flashed white power signs.  One of the groups, the “Proud Boys”—which are basically Nazis who insist on wearing matching cargo shorts—tried to break the line but were stopped by the Orlando PD:

Of course, none of this is at all surprising. It’s your standard issue hate that is on display at any Trump rally.

What happened next, however, caught me off guard, even though it shouldn’t have. Given all the Trump supporters’ ridiculous flag getups, their fake flag waving, and their professed love of all things military, I was dumbfounded as I watched this video my friend shot.

The crowd is filing into the DeVos family’s Amway Center to hear the orange megalomaniac speak, and passed a suffering veteran waiting for his benefits. (I can relate—I’ve been waiting since 2014.)

My friend, who filmed this, knows something about how bad Trump supporters here are.  They often picket his house in the most Trump way possible because he speaks out against them.

The veteran is real. They have a community near downtown. Several of them live in a large area beneath an underpass on Division Road. Unfortunately, there are many others like him in the city. My friend helped out a little bit, but others?

By the way, the lady screaming about the Orlando Sentinel is referring to our conservative local paper, which has endorsed the GOP candidate for the past 50 years with three exceptions, coming out with a pre-endorsement for any candidate running against Trump.

A few Trump supporters on my friend’s site clapped back by calling this video fake, claiming the veteran must have been computer-generated wizardry:

Ignoring a veteran is one thing, but how about just treating them with a little goddamned respect. Here is just a short checklist of what this crowd is okay with Trump doing:

You get the point.

It’s not at all surprising that Trump and his followers have contempt for those who serve in the military. What is surprising is how many pretend otherwise.  Even more so is the support amongst active duty members he has enjoyed for far too long, although that number is rapidly falling. They realize he is not their friend.

Moreover, Trump is a traitor, which is the exact opposite of a veteran.

A lot of people on my veteran Facebook group still go nuts anytime someone posts a picture of Jane Fonda.  They absolutely hate her and call her a traitor who hates our troops and gave aid and comfort to the enemy.

I always ask, then why the hell do you support Trump? (Some of them still do.)

He personally insults and disrespects veterans and their service, even after their death.  He dodged the draft to avoid serving in Vietnam with a fake reason, which he admitted was fake because he said he didn’t care for the war. He did, however, compare himself to a Vietnam soldier because of fighting off STDs.

Worse, he gives aid and comfort to our biggest enemies every day. He outright said he “fell in love” with Kim Jong Un,  and threatened to jail a reporter over taking a photo of the stupid birthday card Kim Jong Un sent to him.

Trump worships Putin and allows him to call the shots in our conflicts in Syria and Iran.  Trump gave away highly classified secrets to the Russian ambassador and is such a traitor that our own Pentagon withholds information fearing he’ll blab our operations to Putin for a candy bar. None of this is normal.

Trump has shown more contempt for our own military than for the hostile regimes he grovels to.  In Trump’s mind, our military isn’t to protect us or further American interests, but only to glorify his despotic ambitions with outlandish parades for himself that you are used to seeing only in corrupt Third World countries.

Democratic candidates, many of whom served in the military, need to be more vocal about this. Trump is the enemy of America and our military. He disgraces us with every insult and every attempt to bring us harm. I promise you that we won’t forget anything he’s done, nor will forget the contempt that all of his enablers and supporters have openly displayed against us.