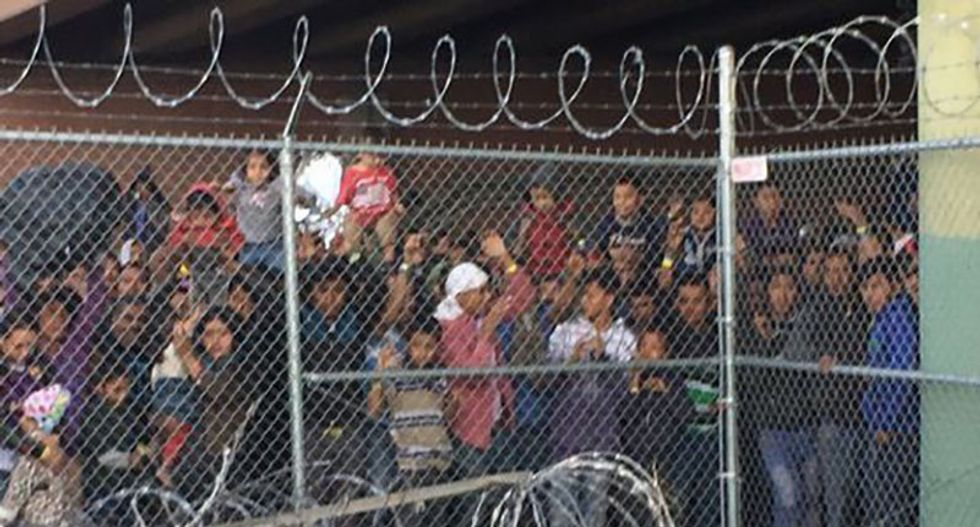 Human rights advocates responded with outrage Wednesday to the Trump administration's decision to start canceling education, recreation, and legal services for unaccompanied migrant children in federal shelters across the country, purportedly because of high detention rates and low funds.

"It's bad enough that the Trump administration is trying to normalize the warehousing of children. It's unconscionable that they would so blatantly try to strip them of their rights," Denise Bell, a researcher for refugee and migrant rights at Amnesty International USA, said in a statement.

"Locking up children and then denying them legal aid, education, and even playtime is all part of this administration's cruel efforts to dehumanize people who have come to the U.S. seeking safety," she added. "Children's human rights must be protected by ensuring they receive proper care while in government custody and are released as soon as possible."

Bell's comments came after U.S. Health and Human Services spokesman Mark Weber confirmed to The Washington Post that the Office of Refugee Resettlement had begun discontinuing the funding for activities deemed "not directly necessary for the protection of life and safety, including education services, legal services, and recreation."

Federal officials have warned Congress that they are facing "a dramatic spike" in unaccompanied minors at the southern border and have asked Congress for $2.9 billion in emergency funding to expand shelters and care. The program could run out of money in late June, and the agency is legally obligated to direct funding to essential services, Weber said.

The move—revealed in an email an HHS official sent to licensed shelters last week, a message that has been obtained by The Washington Post—could run afoul of a federal court settlement and state licensing requirements that mandate education and recreation for minors in federal custody. Carlos Holguin, a lawyer who represents minors in a long-running lawsuit that spurred a 1997 federal court settlement that sets basic standards of care for children in custody, immediately slammed the cuts as illegal.

"We'll see them in court if they go through with it," Holguin said. "What's next? Drinking water? Food? ...Where are they going to stop?"

Linking to the Post report in a tweet, the National Partnership for New Americans (NPNA) denounced the administration's decision as "likely illegal, immoral, and straight-up CRUEL." According to the coalition of immigrant and refugee rights groups, "Even the Trump administration has outdone itself on this one."

This is likely illegal, immoral and straight-up CRUEL. Even the Trump Administration has outdone itself on this one… https://t.co/ojw9uLfJ7y
— NPNA (@NPNA) 1559755803.0

American Federation of Teachers president Randi Weingarten, in a statement, called the move "cruel, craven, and illegal." She explained that "it violates the settlement in Flores v. Reno, which ruled explicitly that detained children are required to have access to things like education services, English language training, recreation time, and social work staff."

Weingarten also linked the move to broader critiques of the Trump administration's detention of children and various anti-immigrant policies—such as the forced separation of families—that have been decried by human rights advocates and experts the world over.

"How you treat children says a lot about your character and your values," Weingarten said, "and with at least six migrant children having died in federal custody in the last year and countless more having suffered, Donald Trump has failed them and a generation of kids looking to this country for a better life, opportunity, and an education."

Rep. Debbie Mucarsel-Powell (D-Fla.), who immigrated to the United States from Ecuador when she was a young child, spoke out against the administration's decision on Twitter.

"These are children that are going through tremendous suffering," said Mucarsel-Powell. "If the Trump administration does cancel these basic necessities like education, exercise, and legal services, they are robbing them of their humanity."