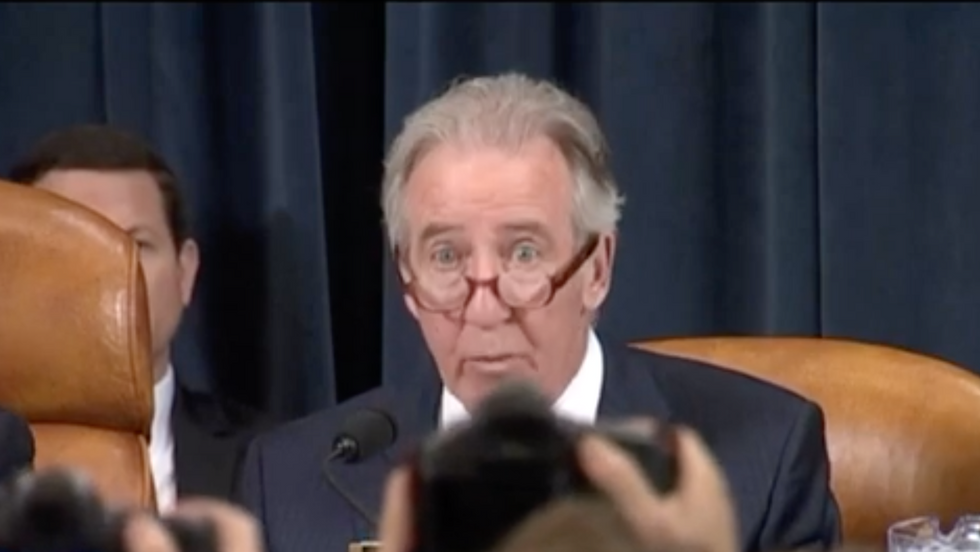 The New York legislature passed a bill last month that would make President Donald Trump's state tax returns available to the House Ways and Means Committee upon request, but the committee's Democratic chairman Richard Neal has reportedly made clear that he has no plans to ask for the documents.

According to Bloomberg, Neal fears that attempting to obtain the president's state tax returns "would bolster Trump administration arguments that Congress is on a political fishing expedition."

"Richard Neal would be the only Democrat allowed by the new law to ask for the documents," Bloomberg reported, "but so far he has said he won't do it."

Neal's refusal to pursue Trump's New York returns—which could contain similar information to the president's federal tax returns—sparked anger from progressive activists and lawmakers, who argued the Ways and Means chairman should be using all of the power at his disposal to investigate Trump's potential financial conflicts.

"The Trump administration will stop at nothing to prevent the American people from seeing Donald Trump’s tax returns," advocacy group Stand Up America told Common Dreams. "With Treasury Secretary Steven Mnuchin illegally blocking their release, Chairman Neal has no choice but to use every tool available to ensure that House investigators are able to uncover the truth about Trump’s conflicts of interests—including obtaining his state tax returns."

"As numerous tax experts and members of Congress have already laid out," Stand Up added, "there is no reason for Chairman Neal to hesitate to use this law once it is enacted."

The TRUST Act is currently awaiting action from New York Democratic Gov. Andrew Cuomo, who is expected to sign the bill.

If enacted, the New York Times reported, the legislation would "require the commissioner of the New York Department of Taxation and Finance to release returns to the chairmen of the House Ways and Means Committee, the Senate Finance Committee, and the Joint Committee on Taxation for any 'specified and legitimate legislative purpose.'"

Several Democratic members of Congress told Bloomberg that Neal should not hesitate to ask for Trump's state tax returns as soon as possible, even though the president could sue in an attempt to block their release.

"Yes, absolutely, we need to ask," said Rep. Pramila Jayapal (D-Wash.), co-chair of the Congressional Progressive Caucus. "We need to know. There is an emoluments clause and a Constitution for a reason."

Rep. Maxine Waters (D-Calif.), chairwoman of the House Financial Services Committee, agreed, saying: "Whatever it takes to get it—I'm for it. I believe that the president of the United States should follow the tradition of other presidents and reveal his tax returns."

Progressives frequently criticized Neal over the past several months for slow-walking the process of obtaining Trump's federal tax documents. Neal finally requested the president's returns in April after months of delay, but Mnuchin has repeatedly refused to hand over the tax returns, even after the Ways and Means Committee issued a subpoena.

On May 23, Neal told reporters that he planned take legal action against the Trump administration "in the next few days," but he has yet to do so.

Lawyer Will Stancil argued in a series of tweets on Wednesday that Neal's reluctance to take decisive action on both Trump's federal and state tax returns shows he "clearly has no real interest in obtaining Trump's taxes and is only interested in engaging in this endless kabuki theater, where he makes 'reasonable' requests, sees them denied, and dithers over enforcement while lamenting how unreasonable Trump is being."

Let's review: Neal waited months to request Trump's taxes, despite having an unrestricted statutory right to do so.… https://t.co/VqvETq49Ev
— Will Stancil (@Will Stancil)1559749905.0

"This is the Pelosi/Schumer game," Stancil wrote. "They ever-so-politely make moderate requests of Trump, and when he flatly denies them, they go whining and crying to voters about how unfair and partisan and unreasonable Republicans are being."

"It's pathetic," Stancil added, "and it's a proven political failure."