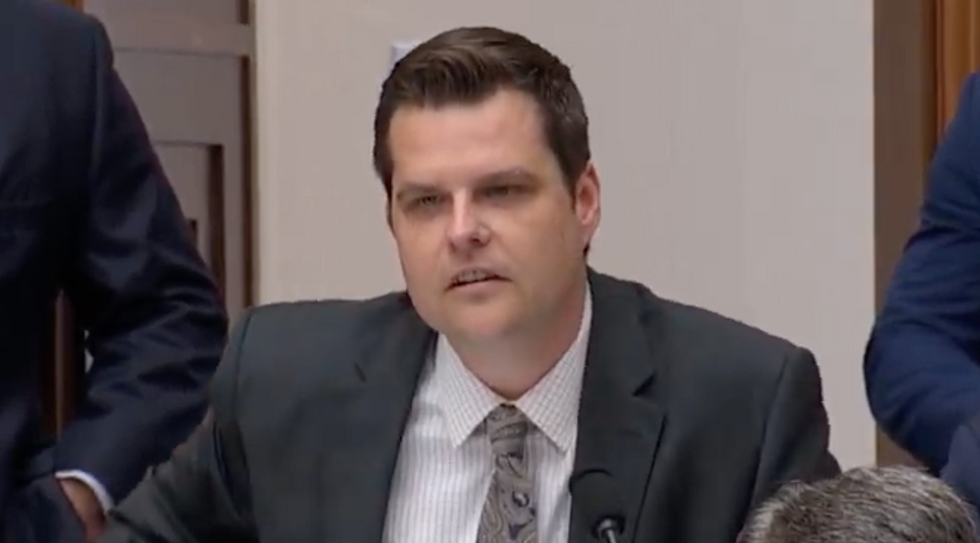 Republican Rep. Matt Gaetz of Florida has embraced a role as one of President Donald Trump's most aggrieved and petulant defenders, apparently banking his political fortunes on the tactic of portraying the commander-in-chief as a victim. But during a House Judiciary Committee hearing on Monday, the limits of the stance became obvious.

Democrats called former federal prosecutors and President Richard Nixon's former White House Counsel John Dean — who played a key role in the hearings against the disgraced president — to testify before the committee. Dean was upfront that he has no new facts to contribute to Congress's investigation of Special Counsel Robert Mueller's report, but he said he was there to provide historical context for Trump's actions. He identified parallels between Nixon's obstruction during Watergate and Trump's obstruction during the Russia investigation.

But these comparisons obviously chafed Gaetz, who was clearly irritated with Dean when he began his questions. As an adversarial questioner, the goal is to damage the witness's testimony or credibility and to poke holes in their story, which Dean is certainly susceptible to. And Gaetz also had an opportunity to question the whole basis of the hearing, the utility of which was doubted even by some supporters of the Democrats, given its lack of a direct link to Mueller's work. And yet when Gaetz tried to pursue this strategy, he completely botched his opportunity, clearly becoming irritable and defensive, and ended up humiliating himself much more than Dean.

Gaetz tried to argue that Dean lacked credibility because he has previously claimed that other presidents, not just Trump, showed parallels to Nixon.

"Throughout history, you accuse presidents of acting like Richard Nixon, and you make money off it, right?" said Gaetz.

"Not all presidents, no," said Dean.

"But a few more than one!" said Gaetz.

"Those who do act like him, I point it out," said Dean.

"Who?" said Dean, throwing Gaetz off once again. "The Democrats? Or, which candidate? Could you be more specific?"

"Well, let's get specific to Nixon, since that appears to be why you're here," replied Gaetz.

"Well, actually, Nixon did have a health care plan," said Dean, not-so-subtly drawing a contrast with the Republican Party's complete dearth of ideas on health care. The committee room broke into laughter at the remark.