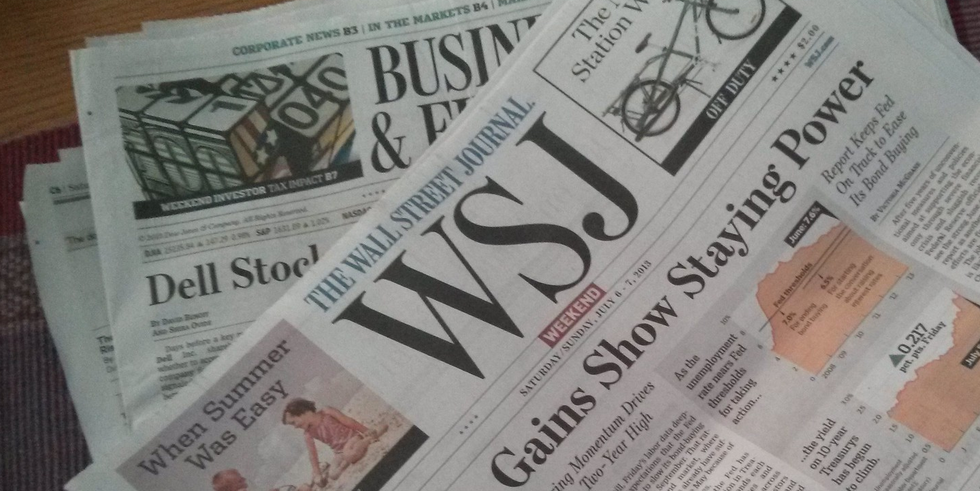 Today's episode of What the hell is going on in the major papers of our day? is courtesy of The Wall Street Journal. BuzzFeed News discovered that the Journal is the most prominent of five outlets that have been publishing the opinion writings of a "Mark Epstein," an "antitrust attorney" with a focus on technology issues who has, for example, thoughts on how social media companies or European nations are being Mean to conservative speech.

The Wall Street Journal claimed that it was unaware of all of this, appearing to cite the ironclad defense of Yeah, um, we didn't bother to check. BuzzFeed reported,"’We know Mark Epstein as we identified him for our readers: a freelance writer and antitrust attorney who has written on antitrust and regulation for a variety of publications,’ a Journal spokesperson said to BuzzFeed News in a statement. ‘We are not aware that he has written under any other byline.’"

The other outlets publishing Epstein's alternate-byline columns also either refused to comment (US News, National Review), claimed ignorance (The Hill), or claimed that his appearance on their platform was "without permission" (Forbes). It is very possible that the National Review, repeatedly burned by its past associations with the white nationalist right, had an inkling of who its newest occasional contributor was; it seems only too plausible that none of the other outlets bothered to check.

What is curious about this is that most people, in fact the great majority of people in the world, go their entire lives without ever once being granted column space in prominent news outlets such as The Wall Street Journal. This is not because they have nothing to say. It is not because they lack expertise on an issue that the regular column writers do not, or because the Journal has wordsmithing standards that only about 100 people on the planet can satisfactorily meet. It does not happen because, in general, column space is granted based on political (not academic) influence, or personal relationship, or with an eye toward filling a particular niche of bland commentary formulated to settle in the reader's stomach with few aftereffects. Your mother could probably not pop into the Journal's in-box as a "freelance writer" and proceed to insert a half-a-dozen or so of her favorite takes into the national consciousness; it doesn't work that way.

An infamous promoter of far-right white nationalist figures and causes, however, was able to settle into the freelance stables of multiple top-tier news outlets as if it were just another day on the op-ed treadmill. Hello, I now write about the dangers posed by social media companies being Too Mean to conservative speech. I care about this for no particular reason, and have no background that might motivate my desire to declare that companies ought not look too closely at the more radical fringes now populating and self-promoting on their for-profit platforms. There is no reason to check up on any of this.