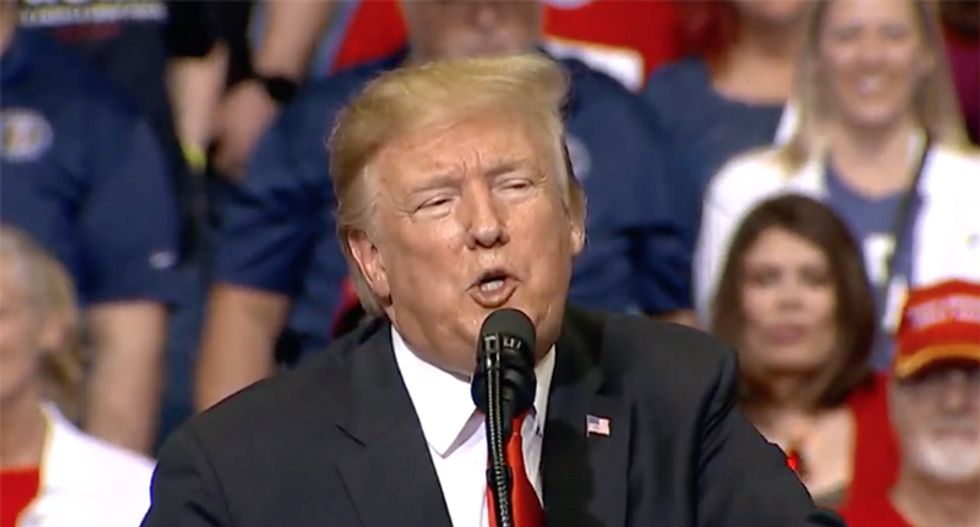 Trump’s “base,” also known as the Republican Party’s “base,” is filled with people terrified of non-white people. They are xenophobic, racist, and angry that they feel all of those things. Ultimately, the biggest problem with racism and bigotry and xenophobia is that, when people are put into positions of power, their biases can be absolutely detrimental to those both directly and indirectly in their wake. The Washington Post has gotten their hands on a teacher-incident review from the Fort Worth Independent School District. In it, the school acknowledges that veteran high school English teacher Georgia Clark didn’t realize her crazy racist tweets to President Trump were public, and not private.

In the middle of May, Clark decided to directly contact her white supremacist president via Twitter, to ask him to clean up her school system of illegal immigrants. Explaining that her school system was “loaded with” illegal immigrants and, “Texas will not protect whistle blowers. The Mexicans refuse to honor our flag.” She also provided her phone number for contact. Clark reportedly did not realize that a) trying to talk directly to the president of the United States via Twitter with your phone number is sort of a bonkers thing for a responsible person to do, and b) everybody could read how goddamn ignorant she is.

Clark was suspended two days before the end of classes, and has lawyered up, as the district board will be making a decision Tuesday on what the next steps are for Ms. Clark. However, the Post reports that this isn’t Clark’s first time she has been mentioned in the same sentence with racism. Clark, a teacher since 1998, is reportedly already under investigation for asking a student to “show me your papers that are saying you are legal,” when they attempted to use the bathroom.

The Fort Worth Star-Telegram has a more detailed accounting of Clark’s racism, including calling students “little Mexico,” and being suspended a few times for bad behavior and language toward students. According to the Star-Telegram it was suggested Clark be terminated after 2014 from her reading teacher job at Western Hills High School after a review of similar abusive language complaints.

In the past 24 hours, there has been much talk in the news and on the Internet about the use of social media by our staff. Our mission is to prepare ALL students for success in college, career and community leadership. Let me reiterate our commitment that every child in the District is welcome and is to be treated with dignity and respect. As we conclude the school year this Friday, please know we take this promise very seriously and your child’s safety and well-being are always our number-one priority. Thank you.

Clark gave a nice cryptic, Q-anon-conspiracy-type of comment to Newsweek about this story, saying “As the editor of my college newspaper years ago (Vietnam era), I know there is always another side to the story.” There might be another side to this story, but it will include this strange inference in one of her many tweets to President Donald Trump.

I contacted the feds here in Fort Worth a few months ago and the person I spoke with did not want to help me or even listen to me. The campus police officer spends his time texting on his cell phone and doing the bidding of Jennifer Orona, Hispanic assistant.

“Hispanic assistant.” Reminds me of something.