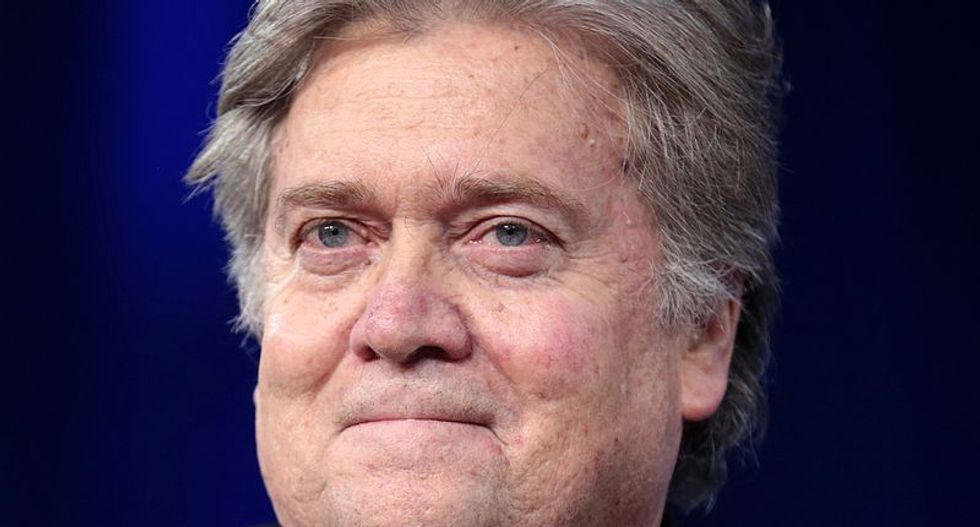 Many far-right Republicans haven’t been shy about making hysterical, exaggerated or wildly inaccurate claims about Democratic Rep. Alexandria Ocasio-Cortez of New York. And one claim that definitely falls into the “wildly inaccurate” category can be attributed to Steve Bannon, ex-White House strategist in the Trump Administration and former executive chairman of Breitbart News.

The Daily Beast has obtained a clip of Bannon being interviewed in July 2018 for director Alison Klayman’s documentary “The Brink.” In the clip, Bannon claims that during Ocasio-Cortez’ congressional primary victory speech of June 2018, she trumpeted her desire to impeach Trump. But according to Klayman, AOC didn’t mention Trump at all during that speech.

When Klayman asks Bannon about Ocasio-Cortez in the clip, he responds, “I think she’s amazing, and here’s why. She came to the microphone, and what’s the first thing she said on her victory night? I’m here to impeach Donald Trump.”

“I thought it [was] definitely part of her speech…. One of her big things was 'impeach Trump' during that night,” Bannon insisted.

On June 26, 2018, AOC shocked the political world by handsomely defeating long-time Rep. Joe Crowley — a high-ranking Democrat — in a congressional Democratic primary. Klayman explained to the Beast, “I wanted to know what Bannon thought of her at this moment, and as you see, he expresses some admiration for her and then goes on to completely mischaracterize her victory speech, falling back on a caricature of a hysterical Democrat triggered by Trump. She didn’t mention Trump once in her whole speech.”

Ocasio-Cortez went on to defeat Republican nominee Anthony Pappas by a landslide in the general election in November 2018. She has been calling for Trump’s impeachment in recent weeks, but after her victory over Crowley in June 2018, impeachment wasn’t one of the things Ocasio-Cortez addressed.

Klayman told the Beast, “Now, (Bannon) knows who AOC is. And now, after the Mueller report, she is speaking out about impeachment for Trump. But in filming this scene, it was immediately evident to me how hollow much of what he presents as ‘analysis’ is.’”

“The Brink” will be released digitally this Tuesday and on DVD on June 18.