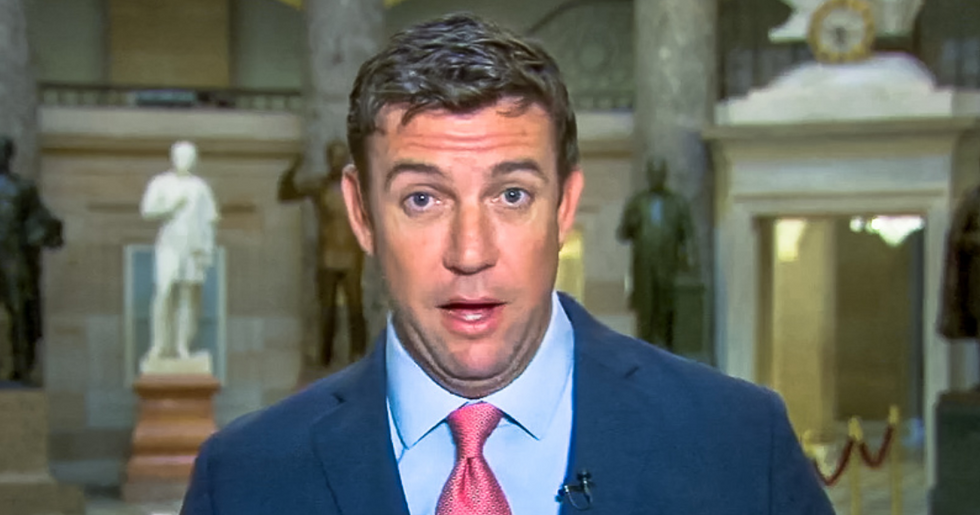 Republican Rep. Duncan D. Hunter of California has been alleging that his legal programs are politically motivated and that he is being persecuted by “the deep state.” And the U.S. Department of Justice (DOJ), according to USA Today reporter Brad  Heath, is asking a judge to prohibit the 42-year-old California congressman from offering evidence of alleged political biases in his case.

Hunter became the target of a DOJ investigation for alleged campaign finance violations in 2017, and the following year, Hunter and his wife, Margaret Hunter, were both indicted on campaign finance charges as well as charges of conspiracy and wire fraud. His wife pled guilty to illegal use of campaign donations earlier this month, but the congressman has continued to fight the charges he is facing.

According to Heath, the DOJ is asking a judge to bar Hunter from “offering evidence or argument concerning alleged political biases or motives of the prosecution team” and making public statements that could “poison the pool of potential jurors.”

In a Twitter thread, Heath notes that Hunter considers the DOJ “the deep state” despite the fact that it is presently being run by appointees of President Donald Trump.

During an August 2018 interview, Hunter described his legal problems as “modern politics and modern media mixed in with law enforcement that has a political agenda. That’s the new Department of Justice.”

On Twitter, Heath notes, “DOJ basically says @rep_hunter should raise his allegation of political bias properly, in a motion to dismiss, or shut up.” Heath’s thread goes on to note some of the things Hunter is accused of — for example, Heath writes, “the Justice Department filed a notice saying Rep. Duncan Hunter illegally used campaign funds to pay for ‘intimate’ encounters with several women, and prosecutors want a judge’s permission to tell jurors about those romances.”

Prosecutors have accused Hunter of illegally spending campaign donations on a wide variety of personal expenses. The congressman allegedly had a series of extramarital affairs (including affairs with three different lobbyists and a GOP aide), and he is accused of using campaign funds in connection with some of those affairs. Hunter is accused of spending over $200 in campaign money to take one of those aides to the pricy H Street Country Club in Washington, D.C.

Previously, Margaret Hunter was the treasurer for her husband’s campaigns. And according to the indictment against them, Rep. Hunter and his wife used campaign funds for personal expenses that ranged from ski trips, hotel stays, tickets to football games and European vacations to golfing and meals in expensive restaurants like Spago in Los Angeles. In addition, the DOJ alleges, they paid for airline tickets for friends and relatives.

A DOJ indictment against Duncan and Margaret Hunter alleges, “To conceal and disguise these illegal personal charges, the Hunters failed to inform the treasurer that they were for a football game or that a family member was one of the attendees. When asked if the charges were campaign related, Duncan Hunter falsely confirmed, ‘Yessir.’”