Raytheon and United Technologies are merging to create 'military-industrial behemoth' 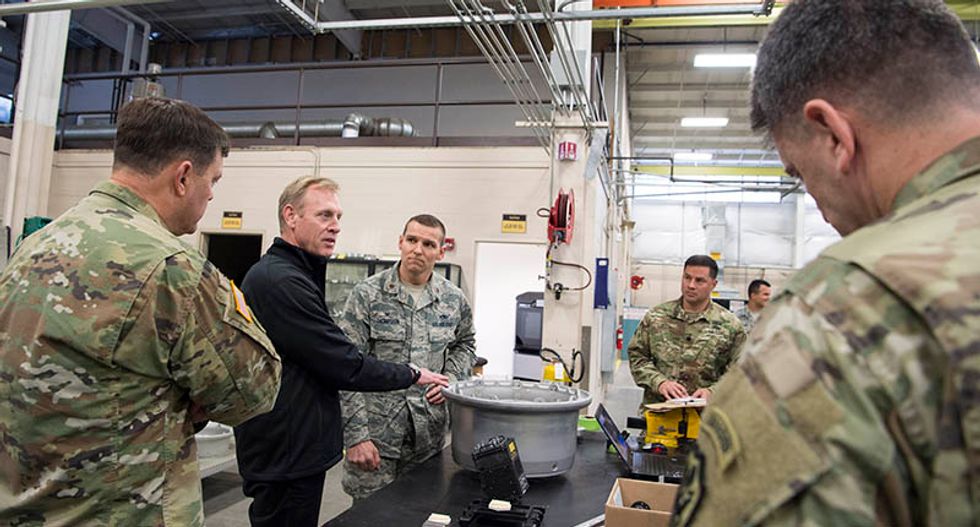 Deputy Secretary of Defense Pat Shanahan learns about the mission of Joint Base Lewis-McChord, Wash., Nov. 14, 2017, from the Airmen and Soldiers stationed there. It was his first opportunity to observe military unit readiness firsthand outside the Washington, D.C., area. (DOD photo by U.S. Air Force Tech. Sgt. Brigitte N. Brantley)
Jake Johnson
and
Common Dreams
June 10, 2019

In a move that immediately sparked concerns among anti-trust advocates, weapons manufacturer Raytheon and aerospace giant United Technologies agreed Sunday to a $120 billion merger that was described as one of the largest-ever combinations of two defense contractors.

The merger, if approved by the government and the two companies' shareholders, would create what the Washington Post described as a "military-industrial behemoth" with the power to rival Lockheed Martin, the world's largest defense contractor.

"The company should be expected to make a strong play for the Defense Department's emerging hypersonic missiles programs," the Post reported. "It also will give Raytheon a sizable foothold in the commercial aerospace market for the first time in recent memory. Before the combination, the lion's share of Raytheon's revenue came from the Pentagon and U.S. intelligence agencies."

On Twitter, anti-trust advocate Daniel Hanley said the United Technologies and Raytheon merger "should be dead on arrival."

The potential merger of @UTC and @Raytheon should be dead on arrival! The chart below should be enough evidence as… https://t.co/RC4H4Iz232
— Daniel Hanley (@Daniel Hanley)1560095136.0

In an interview on CNBC Monday, President Donald Trump—otherwise a fan of large weapons companies—also expressed concern about the proposed merger.

"When I hear United and I hear Raytheon, when I hear they're merging, does that make it less competitive? It's already not competitive," Trump said. "I just want to see competition. They're two great companies, I love them both. But I want to see that we don't hurt our competition."

Matt Stoller, fellow at the non-profit Open Markets Institute, said Trump is correct to raise anti-competition concerns over the proposed merger—while expressing skepticism that the president will hold to that position.

According to an in-depth investigation by In These Times published last month, Raytheon is one of the major providers of missiles and other weaponry to Saudi Arabia, which—with the backing of the United States—has been waging a vicious assault on Yemen since 2015.

"Saudi Arabia's precision-guided munitions are responsible for the vast majority of deaths documented by human rights groups," In These Times found. "[S]ince 2009, Saudi Arabia has ordered more than 27,000 missiles worth at least $1.8 billion from Raytheon alone."

Critics warned that such a move would hand Saudi Arabia the technological capacity to build their own deadly high-tech weaponry, which the kingdom could use to ramp up its bombing campaign in Yemen and continue fueling the world's worst humanitarian crisis.

"Trump backs Saudi Arabia's war in Yemen and sells them bombs they drop on children," Sen. Bernie Sanders tweeted last week. "Now he wants Raytheon to help Saudis develop their own weapons. Congress must stop this president from doing the bidding of the arms industry and this brutal regime."