Pastor apologizes after leading praying for Trump: 'My aim was in no way to endorse the president, his policies' 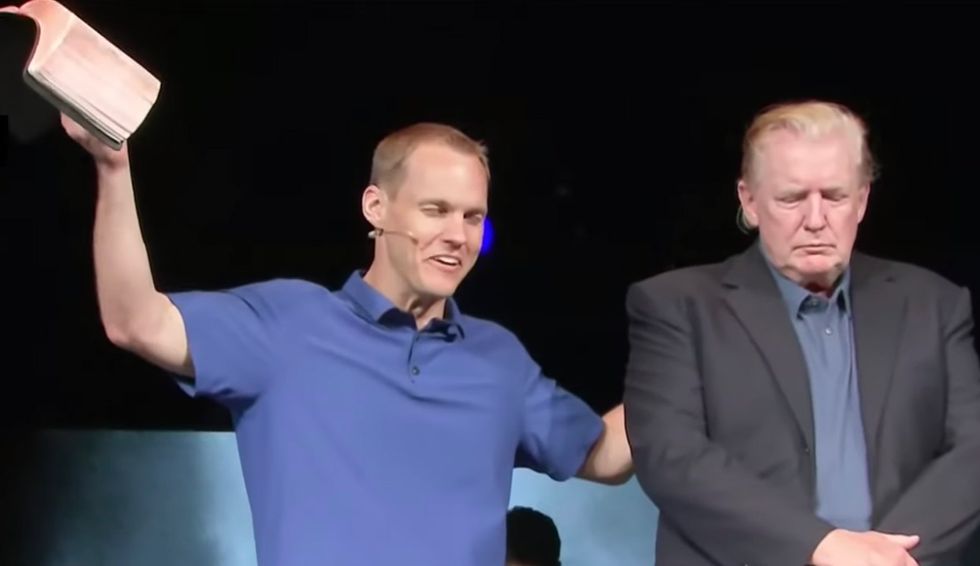 On Sunday, Donald Trump made an impromptu stop at a megachurch in the Virginia suburbs of Washington, D.C. Trump had just finished golfing, and his staff said he wanted to stop by the church to pray for the families and victims in the Friday mass shooting in Virginia Beach. The White House released the following short statement, saying, "President Donald J. Trump is visiting McLean Bible Church in Vienna, VA, to visit with the Pastor and pray for the victims and community of Virginia Beach."

Instead, Trump walked onstage, and Pastor David Platt prayed for Trump. No word whatsoever from Trump, nothing about the shooting victims or their families. No consoling words. Nothing. After the prayer for him, Trump turned and walked away, his golf cleats clacking across the stage, leaving the church just as quickly as he arrived. He might as well have been playing through a hole on the golf course.

Turns out, he wasn’t invited, and Platt sent a letter of apology to the congregation after Trump’s presence upset some of its members. Indeed, in the video of Platt’s prayer for Trump, some members of the church band are clearly refusing to clap. During the introduction and after the prayer, the applause was very muted, except for small number of loud MAGA supporters who yelled out in approval. In the letter, Platt notes that he’d just finished his afternoon sermon when he was notified backstage that Trump would be there within minutes. Platt says he prayed about what to do and then decided he would introduce him to the congregation and ask for people to pray for Trump.

Trump’s visit now makes a lot more sense. And a tip of the hat to the members of that church who recognize that virtually all of Trump’s actions are antithetical to the teachings of Jesus in their Bible.

Sometimes we find ourselves in situations that we didn’t see coming, and we’re faced with a decision in a moment when we don’t have the liberty of deliberation, so we do our best to glorify God. Today, I found myself in one of those situations.

At the end of my sermon at the 1:00 worship gathering, I stepped to the side for what I thought would be a couple of moments in quiet reflection as we prepared to take the Lord’s Supper. But I was immediately called backstage and told that the President of the United States was on his way to the church, would be there in a matter of minutes, and would like for us to pray for him. I immediately thought about my longing to guard the integrity of the gospel in our church. As I said in the sermon today, Christ alone unites us. I love that we have over 100 nations represented in our church family, including all kinds of people with varied personal histories and political opinions from varied socioeconomic situations. It’s clear in our church that the only reason we’re together is because we have the same King we adore, worship, fear, and follow with supreme love and absolute loyalty, and His name is Jesus.

That’s why, as soon as I heard this request backstage, the passage from God’s Word that came to my mind was 1 Timothy 2:1-6:

“First of all, then, I urge that supplications, prayers, intercessions, and thanksgivings be made for all people, 2 for kings and all who are in high positions, that we may lead a peaceful and quiet life, godly and dignified in every way. 3 This is good, and it is pleasing in the sight of God our Savior, 4 who desires all people to be saved and to come to the knowledge of the truth. 5 For there is one God, and there is one mediator between God and men, the man Christ Jesus, 6 who gave himself as a ransom for all, which is the testimony given at the proper time.”

Based on this text, I know that it is good, and pleasing in the sight of God, to pray for the president. So in that moment, I decided to take this unique opportunity for us as a church to pray over him together. My aim was in no way to endorse the president, his policies, or his party, but to obey God’s command to pray for our president and other leaders to govern in the way this passage portrays.

I went back out to lead the Lord’s Supper and then walked off stage, where the president was soon to arrive. In that brief moment, I prayed specifically for an opportunity to speak the gospel to him, and for faithfulness to pray the gospel over him.

While I won’t go into the details of our conversation backstage, one of our other pastors and I spoke the gospel in a way that I pray was clear, forthright, and compassionate. Then I walked back out on stage, read 1 Timothy 2:1-6, and sought to pray the Word of God over the president, other leaders, and our country. (If you would like to see the full context of my comments and prayer, I have included the video below.) After I prayed, the president walked off stage without comment, and we closed our gathering by celebrating heroes among us, a couple who has spent the last 48 years spreading the gospel in remote places where it had never gone before they came. We then recited the Great Commission as we always do, sending one another out into the city for the glory of our King.

I wanted to share all of this with you in part because I know that some within our church, for a variety of valid reasons, are hurt that I made this decision. This weighs heavy on my heart. I love every member of this church, and I only want to lead us with God’s Word in a way that transcends political party and position, heals the hurts of racial division and injustice, and honors every man and woman made in the image of God. So while I am thankful that we had an opportunity to obey 1 Timothy 2 in a unique way today, I don’t want to purposely ever do anything that undermines the unity we have in Christ.

In the end, would you pray with me for gospel seed that was sown today to bear fruit in the president’s heart? Would you also pray with me that God will help us to guard the gospel in every way as we spread the gospel everywhere? And finally, I’m guessing that all of us will face other decisions this week where we don’t have time to deliberate on what to do. I’m praying now for grace and wisdom for all of us to do exactly what we talked about in the Word today: aim for God’s glory, align with God’s purpose, and yield to God’s sovereignty.

I love you, church.

You can watch video of the prayer below: