'Not one more dollar': Progressive Dems vow to oppose all funding for Trump's hateful border agenda' 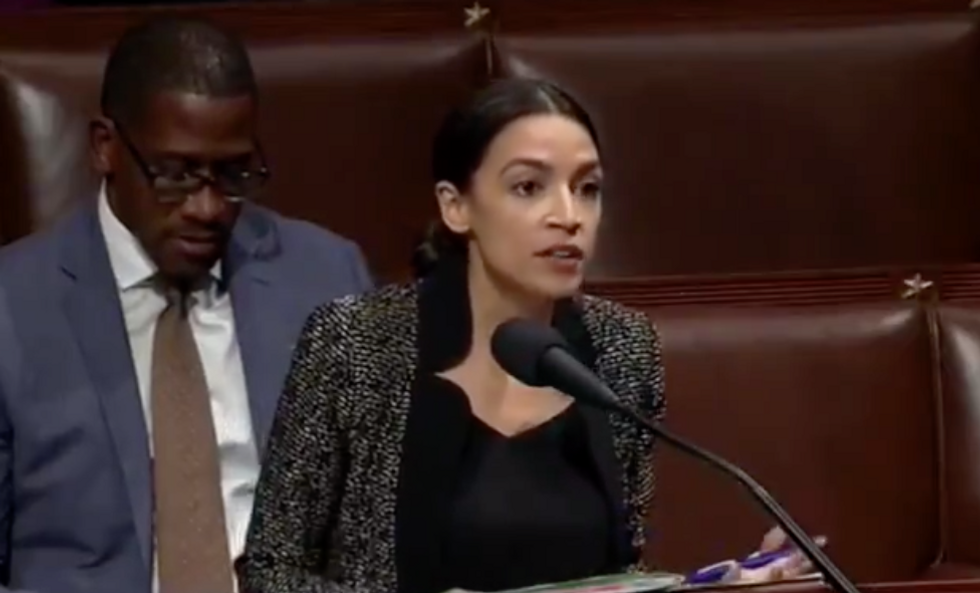 Even as President Donald Trump on Saturday afternoon abruptly announced the "delay" of anticipated raids by U.S. immigration enforcement agents that were slated to begin this weekend, a group of progressive House Democrats earlier in the day vowed to pull their support from legislation proposed by their own party that would provide billions for border security and the president's so called "deportation force."

"We must abolish ICE. We must invest in community-based alternatives to detention. We must end the system of mass detention and deportation of immigrants. We must create an immigration system that reflects our values and respects the dignity and humanity of all."

—Reps. Ocasio-Cortez, Omar, Pressley, and TlaibIn a joint statement, Reps. Alexandria Ocasio-Cortez (D-NY), Ilhan Omar (D-MN), Ayanna Pressley (D-MA), and Rashida Tlaib (D-MI)—all freshman who have been outspoken in their criticism of both the U.S. Customs and Border Protection (CPB) and the Immigration and Custom Enforcement (ICE) agencies—denounced the president's planned raids which reports indicated would take place in 10 major cities across the U.S. beginning on Sunday.

"The Trump Administration would rather criminalize immigrants, separate families, and detain refugees than practice empathy and compassion," the group of four lawmakers said. "Recent reports of a massive deportation operation, targeting thousands of immigrant families in major cities across the country are further evidence that this President will stop at nothing in order to carry out his hateful agenda."

As immigrant rights groups mobilized to provide resources to targeted communitiesahead of the expected raids—and several mayors of the cities thought to be prime targets said they would not participate carrying them out—Trump took to Twitter on Saturday afternoon to say that, "at the request of Democrats," he was suspending the raids at least temporarily.

At the request of Democrats, I have delayed the Illegal Immigration Removal Process (Deportation) for two weeks to… https://t.co/tb27qg9pOc
— Donald J. Trump (@Donald J. Trump) 1561229795.0

In response to Trump's announcement, critics noted that neither postponing nor cancelling the raids does anything to undo the damage that planning them or announcing them is intended to cause:

Meanwhile, the progressive lawmakers pressed their case against the Trump adminisration's approach—and the Democratic legislation which they oppose—on social media:

We should not be giving one more dollar to support this President’s deportation force that openly commits human rig… https://t.co/evoG7a4eBR
— Ilhan Omar (@Ilhan Omar) 1561229451.0

The proposal in question, put forth by House Democrats on Friday, is their version of an emergency border supplemental bill that would provide an additional $1.2 billion in funding to CBP and $128 million to ICE. An alternative to a Senate version, as reporting by The Hill explained,

the House bill would provide hundreds of millions of dollars for processing facilities, food, water and medical supplies for migrants being held along the southern border.

But the House bill also includes a slew of restrictions on how funds can and cannot be used, including conditions for how children should be treated, reporting and oversight requirements and reinstating aid to Central American countries that the Trump administration had cut off.

Despite those increased restrictions and increase in oversight, however, Ocasio-Cortez, Omar, Pressley, and Tlaib said they would not support providing the CBP or ICE with any additional funds under the current circumstances.

"These radicalized, criminal agencies are destroying families and killing innocent children," they said in their statement. "It is absolutely unconscionable to even consider giving one more dollar to support this President's deportation force that openly commits human rights abuses and refuses to be held accountable to the American people."

"That is why in good conscience," they continued, "we cannot support this supplemental funding bill, which gives even more money to ICE and CBP and continues to support a fundamentally cruel and broken immigration system."

Comparing the abuses now happening at the U.S. southern border and in immigration detention centers nationwide as the kind of atrocities that the U.S. government would rightly condmen if they were happening elsewhere in the world, the lawmakers said such violations by agencies of their own government cannot be ignored.

"We must be equitable in our outrage," they stated. "We must abolish ICE. We must invest in community-based alternatives to detention. We must end the system of mass detention and deportation of immigrants. We must create an immigration system that reflects our values and respects the dignity and humanity of all."