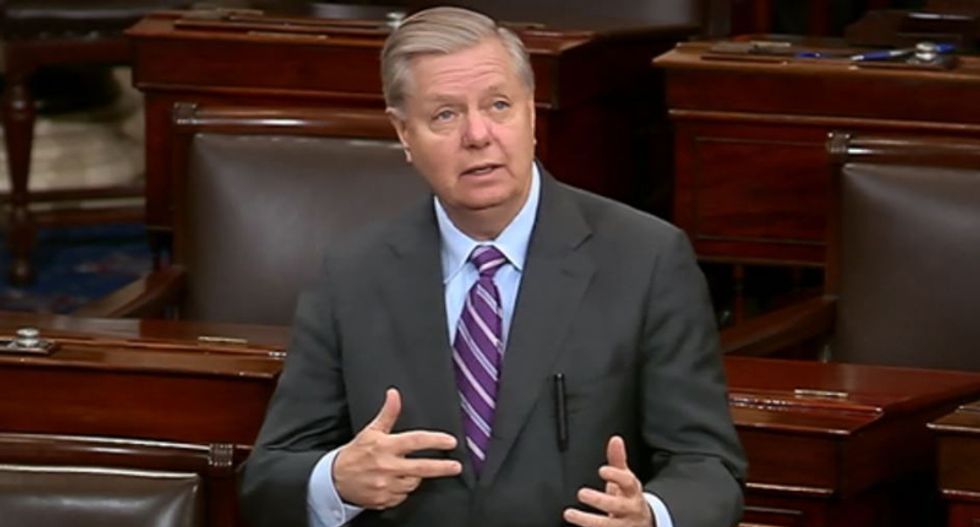 Like almost every Republican who doesn’t look and act like a golem made of stale circus peanuts, primal shame, and nougat, Lindsey Graham was once a vocal opponent of tariffs and a fierce defender of free trade.

He agrees with Donald Trump that we should burn down our relationship with our biggest trading partner because people in our country (including … uh ... Donald Trump) won’t stop hiring Mexicans.

So now New York Times columnist Charles M. Blow is wondering what we’ve all been wondering. What the fuck happened to Lindsey Graham?

Are you being blackmailed? Serious question. Help us understand what has happened to you. None of the explanations… https://t.co/6eSanutpdS
— Charles M. Blow (@Charles M. Blow) 1559321849.0

Graham, who once said Trump is a “kook,” “crazy,” and “unfit for office,” used to be one of a handful of GOP congressional members with the sense and good taste to vigorously challenge Trump. But now he spends most of his spare time measuring Trump’s descending colon for drapes.

In fact, Graham is nearly alone among GOPsters in his support of Trump’s latest trade salvo.

But shortly after Trump’s inauguration, Graham tweeted this:

So is Graham being blackmailed, or is he just unusually craven?

Both could be true, of course, but at least one of these has to be the right explanation.