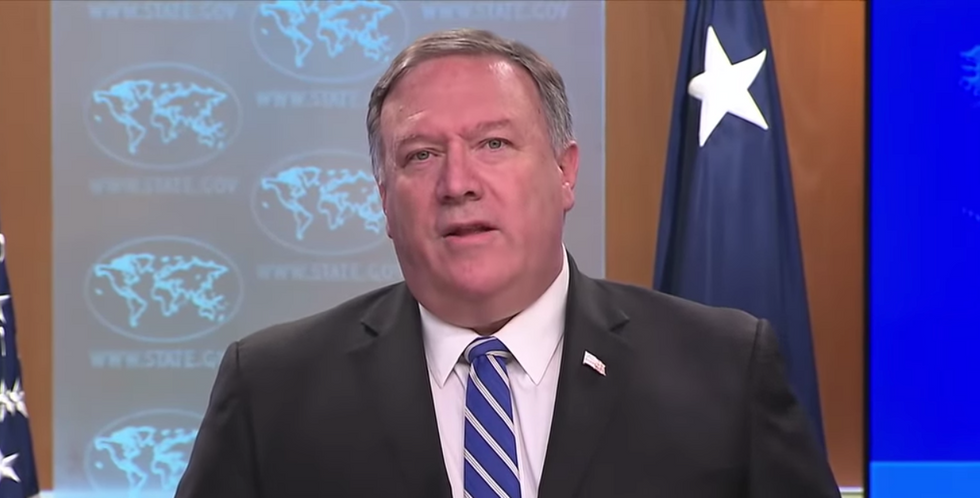 In a press conference that immediately evoked memories of the lead-up to the 2003 invasion of Iraq, U.S. Secretary of State Mike Pompeo on Thursday claimed Iran was behind alleged attacks on two oil tankers in the Gulf of Oman without presenting one single shred of evidence.

"This assessment is based on intelligence, the weapons used, the level of expertise needed to execute the operation, recent similar Iranian attacks on shipping, and the fact that no proxy group operating in the area has the resources and proficiency to act with such a high-degree of sophistication," said Pompeo, who did not provide any details on the intelligence he cited.

After asserting Iran was also behind a litany of attacks prior to Thursday's tanker incident—once again without presenting any evidence—Pompeo said that,"Taken as a whole, these unprovoked attacks present a clear threat to international peace and security."

Pompeo—who has a long history of making false claims about Iran—did not take any questions from reporters following his remarks, which were aired live on America's major television networks.

"Mike Pompeo has zero credibility when it comes to Iran," Jon Rainwater, executive director of Peace Action, told Common Dreams. "He's long been actively campaigning for a confrontation with Iran. He has a track record of pushing bogus theories with no evidence such as the idea that Iran collaborates closely with al-Qaeda."

"Once again Pompeo is not waiting for the evidence to come in," Rainwater said, "he is picking facts to suit his campaign for confrontation with Iran."

Medea Benjamin, co-founder of anti-war group CodePink, characterized Pompeo's speech as a "deja vu" of former Secretary of State Colin Powell's infamous weapons of mass destruction speech before the U.N. in 2003, which made the case for the Bush administration's invasion of Iraq.

"Secretary Pompeo gives zero proof but insists that Iran is responsible for ship attacks in Gulf of Oman this morning," Benjamin tweeted. "Lies, lies, and more lies to make a case for war. Let's not be fooled into another disastrous war!"

In a column following Pompeo's speech, Esquire's Charles Pierce wrote that he is "not buying this in the least."

"I remember the Iraq lies," Pierce wrote. "I know this administration is truthless from top to bottom and all the way out both sides. I don't trust the Saudi government as far as I can throw a bone saw. And this president feels very much like he's being run to ground at the moment and needs a distraction."

"And his Secretary of State is a third-rate congresscritter from Kansas who once advised American soldiers to disobey lawful orders, and who's fighting way above his weight class," added Pierce. "Also, too, John Bolton is eight kinds of maniac."

On Twitter, Trita Parsi—founder of the National Iranian American Council—echoed Pierce, writing: "A serial liar is president. A warmonger and a serial fabricator who helped get us into the disastrous Iraq war and who has sabotaged numerous attempts at diplomacy is the [national security] advisor."

A serial liar is President. A warmonger and a serial fabricator who helped get us into the disastrous Iraq war an… https://t.co/bAJINcE0Vj
— Trita Parsi (@Trita Parsi)1560454396.0

As Common Dreams reported earlier, critics warned that the timing and target of the tanker attacks on Thursday suggests they could have been a deliberate effort to "maneuver the U.S. into a war" with Iran.

Iranian officials denied any responsibility for the attacks.

In a tweet following the explosions in the Gulf of Oman on Thursday, Iranian Foreign Minister Javad Zarif said, "Suspicious doesn't begin to describe what likely transpired this morning."

Rainwater of Peace Action said what is needed to calm the dangerous tensions of the current moment is an "impartial investigation" into the tanker incident.

But Pompeo's statement only served to escalate tensions further and move the U.S. and Iran closer to a military conflict, Rainwater said.

"At a time when the world desperately needs cooler heads to deescalate tensions in the Gulf, the U.S. Secretary of State is instead fanning the flames," Rainwater said. "Our elected officials need to push for diplomacy now to take us away from the brink of war."