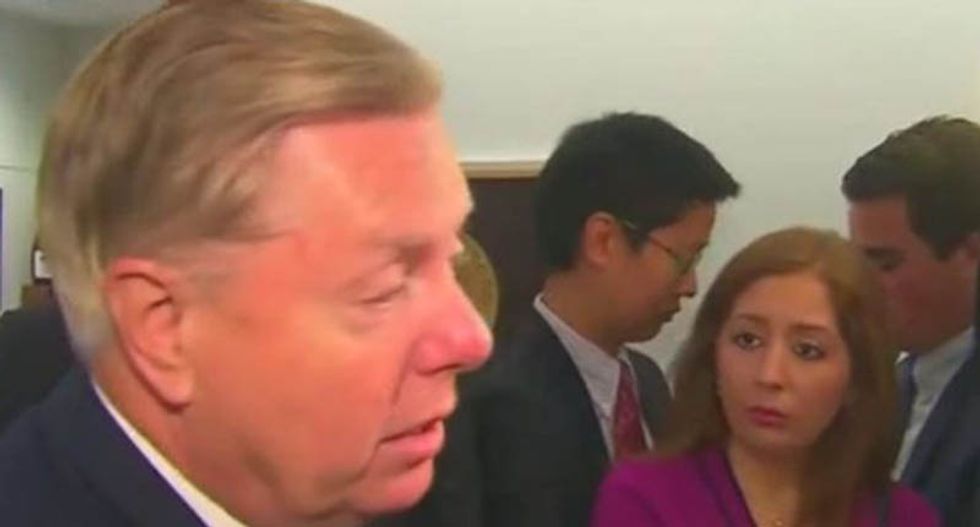 In an impromptu interview with reporters, Sen. Lindsey Graham (R-SC) tried to flip the script on Democrats after the president’s recent decision to accept dirt from foreign nationals for an election.

President Donald Trump said in an ABC interview with George Stephanopoulos that the FBI was “wrong” to claim that candidates should report if a foreign entity offers them dirt on an opponent during an election. The president has tried to turn it around to say that he was talking about meeting with foreign officials.

“Giving you anything of value whether it be money or information on your opponent, the right answer is no,” Graham said, becoming the first major Republican to disagree with the president. “And I’ve been consistent about that. I think Christopher Wray’s statement is the correct statement.”

But that’s when he quickly pivoted to blaming Democrats for allegedly accepting foreign dirt.

“I’m hoping some of my Democratic colleagues will take more seriously the fact that Christopher Steele was a foreign agent paid for by the Democratic Party to gather dirt on Trump, document unverified use today to get a warrant,” he said. “That’s why I’m so upset about that. Foreign influence in our elections is growing, not lessening. We don’t want to send a signal to encourage it. So that’s why I think looking at the FISA process regarding the Steele dossier’s important.”

The Steele dossier was paid for by a “Never Trump” conservative website before it was then turned over to Democrats and the FBI. Christopher Steele was not working on behalf of a foreign government to undermine an American election.