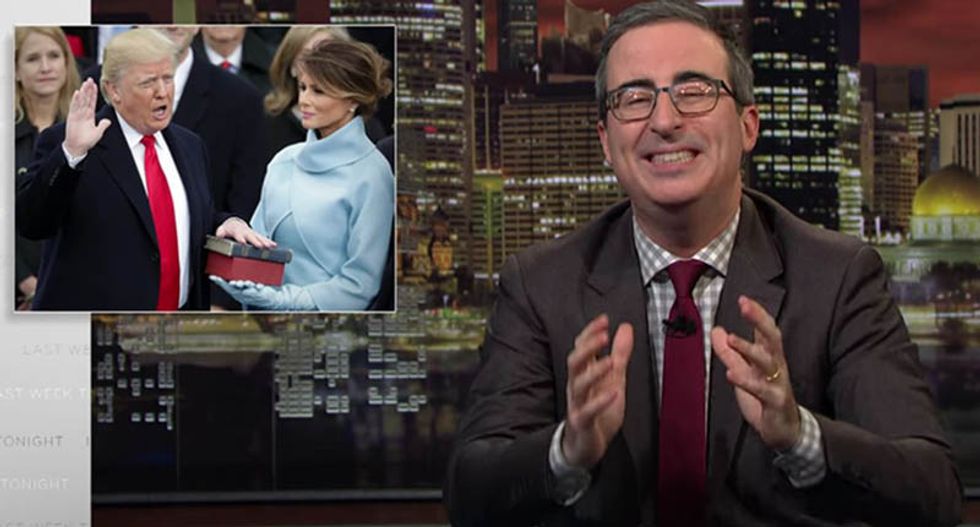 The overwhelming majority of Americans have not read the 400-plus-page report from special counsel Robert Mueller.

As it stands, it’s unclear how many elected officials have either. It’s become a problem for Democrats, who would like to impeach the president but can’t get the American people to pay attention long enough.

“Last Week Tonight” host John Oliver has a solution. In his Sunday show, Oliver outlined a vital piece of the report that outlined just one of many obstructions of justice at the hand of President Donald Trump.

After he outlined what impeachment is, he showed Trump talking about the law that claims it’s for “high crimes and misdemeanors.” According to Trump, he has to be accused of both because it says “and.” An annoyed Oliver corrected the president’s incorrect assessment.

He focused specifically on the example where Trump told his White House Counsel, Don McGahn, to fire Mueller. McGahn refused to do it and assumed that if he refused, he was likely going to be asked to resign. McGahn is quoted in the Mueller report saying that the president asked him “to do crazy sh*t.”

The Mueller report outlined that Trump told McGahn to fire Mueller and to “call me back when you do it.” Trump then called back later to ask, “Have you done it?”

Oliver noted that it’s clear that it was important to Trump, not like some weird celebrity gossip or flippant fleeting moment from a White House lawn press conference.

When news came out that Trump told McGahn to fire Mueller, the president told his counsel to release a statement saying that the report wasn’t true. He then asked McGahn to write a “letter to file for our records” saying the same.

Oliver then showed a video of a Trump supporter from Michigan who explained to MSNBC that she never knew Mueller had found anything because she only listens to conservative news.

“But for Don McGahn, Trump may have stopped an investigation into himself,” Oliver reminded viewers.